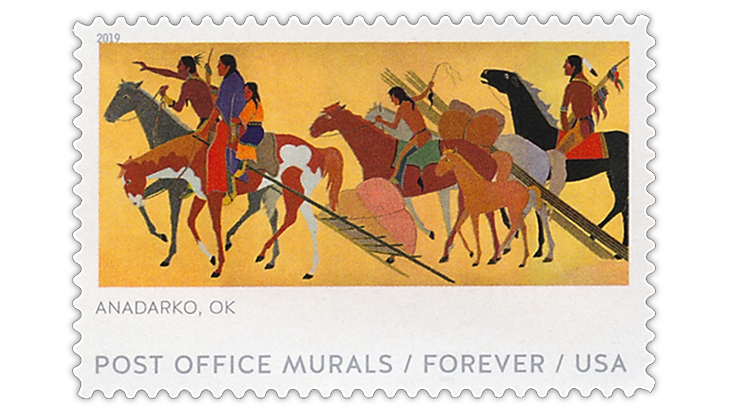 The forever stamp showing the Anadarko post office mural was issued April 10. The Oklahoma City Stamp Club is featuring the Anadarko murals as a theme for its June 28-29 show.

The mural Kiowas Moving Camp in the Anadarko, Okla., post office is featured on one of the five Post Office Murals commemorative stamps issued April 10. The show theme honors all 16 Native American murals at the Anadarko post office, which is just a little more than an hour’s drive west of the show venue.

With a competitive display of 2,000 collector pages, Okpex is an American Philatelic Society World Series of Philately event. The multiframe grand-award winner will qualify for the Champion of Champions competition at the 2019 APS Stampshow taking place Aug. 1-4, in Omaha, Neb.

The exhibit winning the single-frame grand award will qualify for the single-frame championship sponsored by the American Association of Philatelic Exhibitors at St. Louis Stamp Expo, March 27-29, 2020.

The Okpex bourse will comprise 14 dealers from six states and one from England. The United States Postal Service postique booth is open throughout the event.

Activities for youngsters will include a youth area with buckets of free stamps.

The Oklahoma Philatelic Society meeting will begin at 11 a.m. Friday, and the American Topical Association regional meeting will start at 1:30 p.m.

This year Okpex will hold its first annual Red River Shootout, a philatelic challenge to all Oklahoma and Texas stamp clubs. The members of each club will assemble a single exhibit frame to show what members of the club collect. The club with the best single frame will receive a very fine used U.S. 1847 5¢ Benjamin Franklin stamp (Scott 1).

The Okpex debut of the Red River Shootout carries on a tradition originally featured at the former Texpex stamp show.

The Sheraton Hotel Midwest City at the Reed Conference Center offers a special room rate of $99 per night for show attendees.