Old Man of the Mountain crumbles, but stamps remain 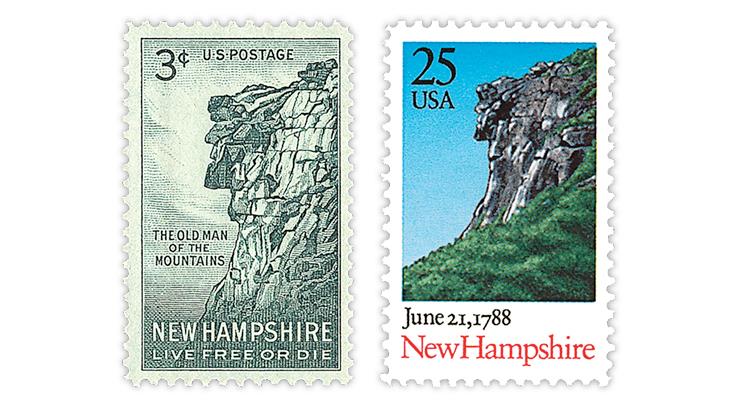 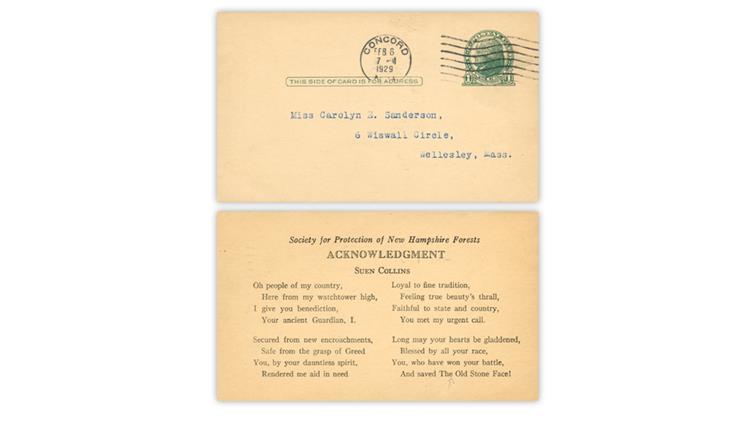 Figure 2. This 1¢ postal card canceled in 1929 includes a poem to thank the people who donated to repair the Old Man of the Mountain.
Previous
Next

It is said that “Mother Nature always bats last.” And in the case of the Old Man of the Mountain — a series of five granite cliff ledges on the Cannon Mountain in the White Mountains of New Hampshire that resembled the profile of a man, nature wrote the last chapter on May 3, 2003, when the formation collapsed.

However, the Great Stone Face, as it was also called, had served as the central design element for the 1955 3¢ commemorative stamp (Scott 1068) honoring New Hampshire and the sesquicentennial of the discovery of the formation.

In 1988 the 200th anniversary of New Hampshire’s ratification of the Constitution was celebrated on a 25¢ commemorative showing the formation (Scott 2344).

These two stamps are shown in Figure 1. The collapse of the Old Man of the Mountain leaves these U.S. stamps among only a few that depict natural landmarks that no longer exist.

The Old Man of the Mountain was likely formed after the retreat of glaciers 12,000 years ago. The first recorded mention of it dates to 1805.

Nathaniel Hawthorne used the granite formation in a short story titled The Great Stone Face published in 1850. In the story, he described it as “a work of Nature in her mood of majestic playfulness.”

But there were intimations of mortality as early as the 1920s when freezing and thawing had opened large fissures in the Old Man of the Mountain’s forehead.

There was a public effort to raise funds for repairs, according to the poem on the back of the 1¢ Jefferson postal card shown in Figure 2. The card was sent Feb. 6, 1929, from Concord, N.H., to Wellesley, Mass.

Printed on the back of the card under the headings “Society for the Protection of New Hampshire Forests” and “Acknowledgment” is this poem by Suen Collins:

Oh people of my country,

Here from my watchtower high,

I give you benediction,

Your ancient Guardian, I.

Safe from the grasp of Greed

You, by your dauntless spirit,

Rendered me aid in need.

Faithful to state and country,

You met my urgent call.

Long may your hearts be gladdened,

Blessed by all your race,

You, who have won your battle,

And saved The Old Stone Face!

In 1957 the New Hampshire legislature appropriated $25,000 for weatherproofing the formation, using steel rods and 20 tons of fast-drying cement. It helped, but between midnight and 2 a.m. May 3, 2003, the formation collapsed to the ground.

A task force formed by the governor at the time, Governor Craig Benson, looked at the possibility of replacing the formation with a replica, but the idea was rejected.

Still, the nearly 126 million 3¢ stamps and nearly 154 million 25¢ stamps issued will help stamp collectors to remember the Old Man of the Mountain.