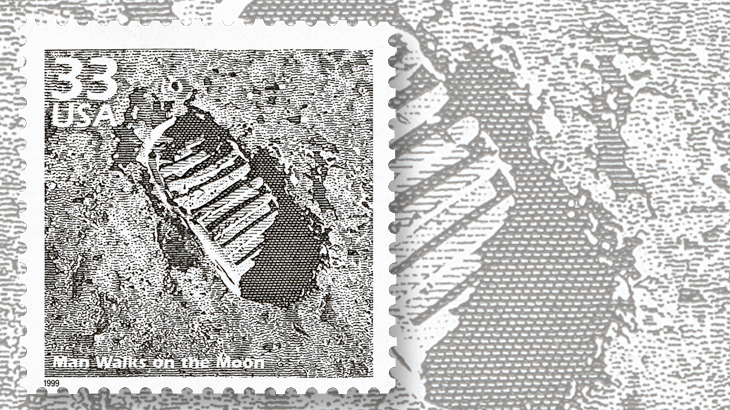 Neil Armstrong and Buzz Aldrin became the first space explorers to walk on the moon on July 20, 1969.

One 33¢ stamp in the 1960s Celebrate the Century stamp pane issued Sept. 17, 1999, commemorates the successful landing of two American astronauts on the surface of the moon 30 years earlier (Scott 3188c).

The reverse of the stamp includes a printed inscription that reads: “President John F. Kennedy’s 1961 commitment to put a man on the moon was fulfilled July 20, 1969, when the lunar module Eagle landed on the surface of the moon, and astronauts Neil Armstrong and Buzz Aldrin walked on lunar soil.”

On the front of the stamp is the image of an astronaut’s footprint in that lunar soil; it was taken by Aldrin during the 1969 Apollo 11 mission, but whether the footprint is his or Armstrong’s is not known.

Many years before, the United States Post Office Department had commemorated the event with a 10¢ airmail stamp issued Sept. 9, 1969, just weeks after the moon landing actually happened. The design of that stamp (Scott C76) shows the first man on the moon — Armstrong — as he steps off the ladder of the lunar module and onto the surface of the moon.

Armstrong’s famous quote at that moment — “That’s one small step for [a] man, one giant leap for mankind” — is etched forever in the history books.

Over the years, several other United States stamps have also marked the first manned moon landing.