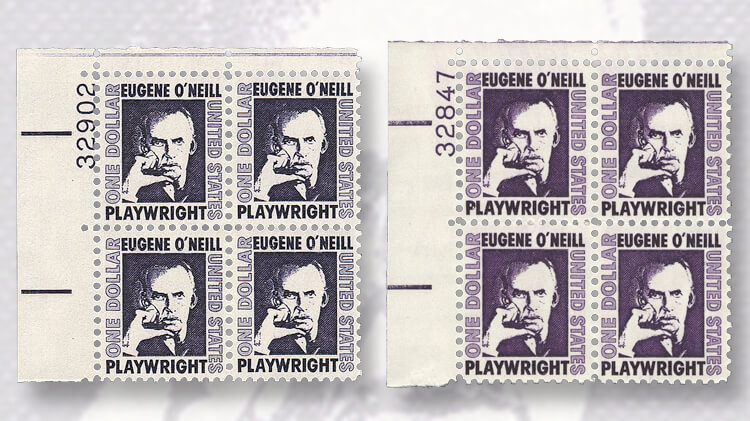 On the left is a plate-number block of four of the scarce black violet color variety of the $1 Eugene O’Neill stamp (Scott 1294b), which was first reported in April 1975. A plate block of $1 O’Neill stamps in the normal dull purple color (1294) is shown a

Sometime in the early 1970s, the Bureau of Engraving and Printing inadvertently printed a small quantity of the United States 1967 $1 Eugene O’Neill stamp in a distinct black violet color, instead of the normal dull purple.

First mention of this color variety of Scott 1294 appeared in the April 1975 issue of The United States Specialist, the official monthly journal of the Bureau Issues Association (now known as the United States Stamp Society).

But in what some might call a surprising twist of philatelic fate, the stamp wasn’t even acknowledged in the Scott Specialized Catalogue of United States Stamps and Covers until publication of the 2013 edition in fall 2012 — roughly 40 years after its discovery.

A footnote in the 2013 U.S. Specialized catalog formally brought the stamp to the attention of U.S. collectors: “The Philatelic Foundation in 2010 issued a certificate for a block of 4 of No. 1294 in a ‘black violet’ shade. The editors would like to receive evidence of other examples.”

It didn’t take long for the required evidence and documentation to begin arriving on the Scott editors’ desks.

Accumulation of that evidence began with Walter M. Sharman’s report of a “major contemporary discovery” in the aforementioned April 1975 Specialist issue.

Sharman details how the Bureau was contacted about the color variety and offered to examine stamps to ascertain the origins of the black violet color.

Three possibilities for the color’s occurrence were put forth by the Bureau before it actually examined the stamps: 1. The Bureau simply used the wrong ink. 2. The Bureau failed to clean properly the ink fountains on its Cottrell press, which could have resulted in the mixing of different inks. 3. The black violet O’Neill stamps were color changelings, the result of exposure to chemicals or intense light.

Following its analysis, the BEP, in a letter dated Feb. 5, 1975, stated: “Analyses that were conducted on the pigment components present in the submitted stamp show that the wrong ink was used for the production of these stamps.”

According to Sharman, the black violet stamp was, among other BEP findings, “not authorized” and that those that were printed should have been removed as part of the Bureau’s quality control processes. Furthermore, the stamps “should not have been placed in circulation.”

At the time of Sharman’s April 1975 report, initial finds were reported in Glendale, Calif., and Brighton Beach, N.Y.

Sharman revealed that the black violet stamps discovered at the time were not tagged. That is the case with all known examples today.

Sharman states in his report that, based on when the two known plates used to print the black violet stamps (32902 and 32903) were in use, “production of the stamp could not have occurred after February 21, 1974,” the date that the BEP canceled plate 32903.

Illustrated nearby is a 32902 plate-number block of the $1 black violet O’Neill. For comparison, a normal dull violet plate block is pictured at right.

Collectors responded with great enthusiasm to Sharman’s initial report. This feedback was summarized in a second report from Sharman that appeared in the July 1975 Specialist.

There were a number of false alarms: collectors who thought they had found the scarce color variety, only to learn from Sharman that they had the normal dull purple stamp.

Honolulu and Kona, Hawaii, were added to the list of locations where the black violet variety had been sold.

Sharman followed up with a terse third report in the September 1975 Specialist, announcing that black violet stamps had been found in Irwindale, Calif.

Not long thereafter, it appears, interest in the black violet discovery all but dried up.

Sharman stated in his initial April 1975 report that “all correspondence relating to the stamp and examples of the stamp have been submitted to Scott Publications for catalogue recognition.”

The Scott editors at that time (and in subsequent years) apparently had no interest in listing the color variety.

And that’s when the stamp entered limbo status — for the next 35 years.

On April 1, 2010, the Philatelic Foundation in New York City issued a certificate for a top-left margin block of four, described as a variety of Scott 1294 in the color of “black violet.”

This certificate from the Foundation eventually prompted the Scott editors to install the footnote announcing the black violet variety and requesting in the 2013 U.S. Specialized catalog to see “evidence of other examples.”

Evidence, including the resurrection of Sharman’s reports cited here, followed not long thereafter, and the black violet color variety was duly assigned Scott 1294b in the 2014 U.S. Specialized catalog, which was published in October 2013.

Following this official recognition, two black violet plate-number blocks and a single crossed the expertizers’ desks at the Foundation in 2014; all three received certificates stating that they are genuine examples of Scott 1294b.

Today, the $1 black violet O’Neill may be considered a scarce stamp.

Wayne Youngblood, who writes The Odd Lot for Linn’s and is a recognized expert on stamp production technology, told me “there are currently fewer than 300 examples known, including six plate blocks and a couple of used singles.” He is not aware of any on-cover examples.

All values except for a mint single are in italics, a reflection both of scarcity and infrequent sales.