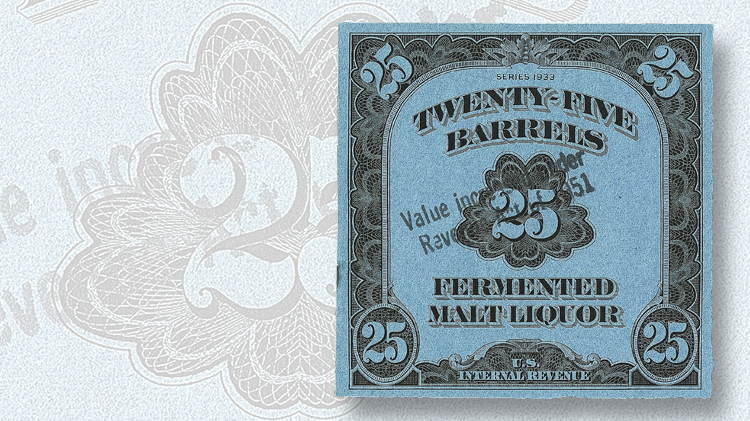 Only two intact examples are known of the last beer tax stamp issued by the United States in 1951. The stamp has a handstamped surcharge of $225 on a 25-barrel stamp. This example will be offered during the Sept. 20 Siegel auction. 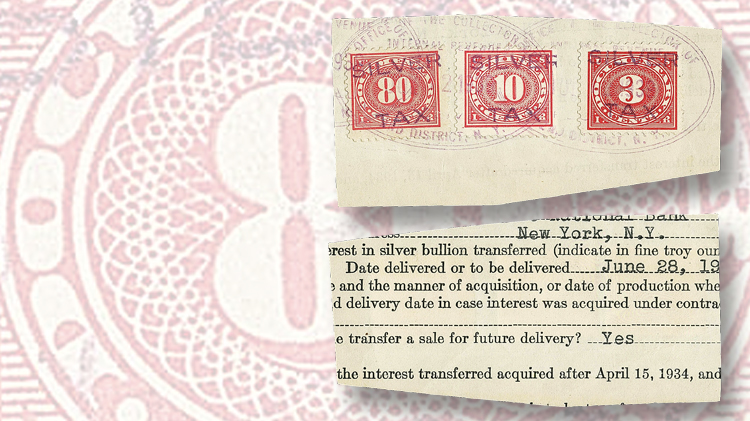 The Sept. 20 Robert A. Siegel auction also will offer this unique piece of a silver tax transfer form from 1939 bearing three rare handstamped stamps, including the only recorded 3¢ stamp. 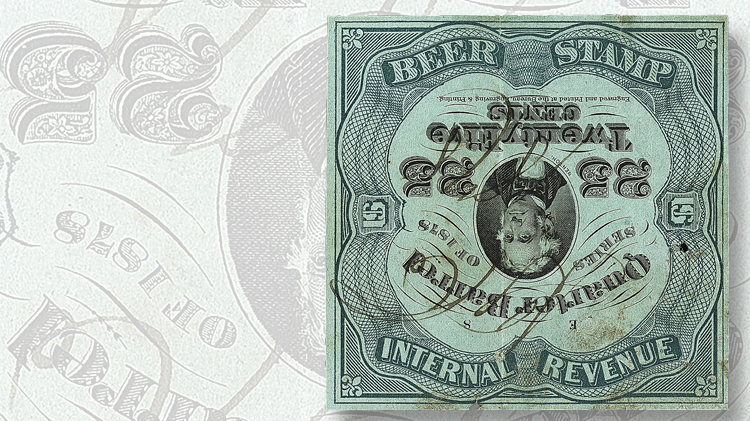 The 1878 25¢ Benton quarter-barrel beer tax revenue stamp with center inverted, the only known example of this stamp as an invert error. From the Grant Inman collection, it will be auctioned Sept. 20 by Robert A. Siegel. 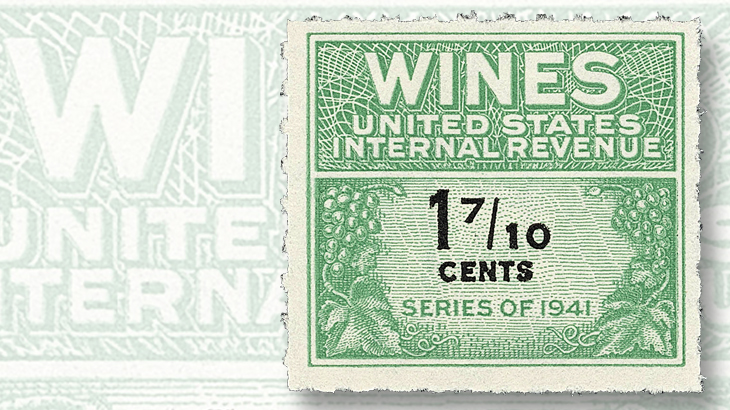 An unused 1 7/10¢ offset-printed series of 1941 wine tax stamp from 1951-54 will be offered during the Sept. 20 Robert A. Siegel auction of revenue stamps from the Grant Inman collection. Only three unused and two used examples of the rare tax stamp are r 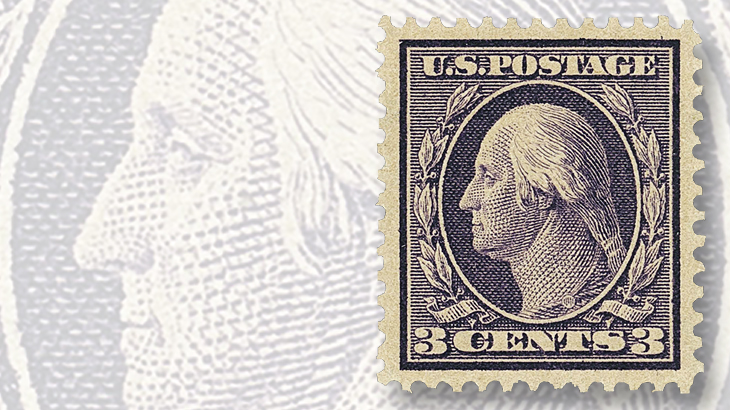 From the 1909 issue on bluish paper, Robert A. Siegel will offer this 3¢ deep violet George Washington stamp, which has achieved the highest grade for centering, at superb 98. No other stamp of its kind has hit that mark.
Previous
Next

On Sept. 19, almost 500 lots of mostly classic-era United States stamps in high-grade condition will be offered as the Clipper City collection.

The next day will bring Part 6 in the series of auctions of material from the Grant Inman collections, this time with revenue stamps documenting taxes paid on wine, beer, and silver.

A common element of both sales is that among the lots on offer are some that can be characterized as unique: the only stamp of its kind known to exist.

In the Clipper City collection sale, this refers to a stamp that exists in the top grade ever assigned to it, with no other examples of that superb quality known: an unused 3¢ deep violet type I George Washington stamp on bluish paper from the 1909 issue (Scott 359).

The unused stamp is valued at $1,800 in the 2017 Scott Specialized Catalogue of United States Stamps and Covers, but as with most listings, that catalog value is for a stamp graded very fine (numerically, at 80).

The example in this sale has been graded at a far superior superb 98 on a 2014 Professional Stamp Experts certificate, the highest grade awarded in any category, identifying the centering of its design as the best known.

It is, according to Siegel, the only example of this 3¢ stamp on bluish paper to achieve this top grade.

The 2017 Scott Stamp Values — U.S. Specialized By Grade listings in the U.S. Specialized catalog assigns a value of $6,500 to such a stamp. The Siegel auction catalog description notes a $5,000 value for the same superb-98 stamp in Stamp Market Quarterly, a publication of the PSE authentication and grading firm that also breaks down the values of stamps by grade.

“No other Scott 359 shares this exalted grade,” the Siegel description observes, calling it a true condition rarity.

There are more than 30 lots in the collection offerings that are the highest graded examples.

“The Clipper City collection was formed by a collector who set out to acquire high-quality examples of regular and commemorative issues from 1847 through the mid-20th Century,” Siegel notes in its Fall 2017 Siegel Despatch publication.

“Whether a stamp was unused or used did not matter, as long as the quality was choice.”

Even those stamps that do not achieve the highest grade are still among the very best examples in existence, with extremely fine (grade 90) and extra fine-superb (95) stamps offered in abundance.

The wine, beer, and silver tax stamps from the Grant Inman collection will be auctioned Sept. 20, beginning at 10:30 a.m., with some 229 mostly single-stamp lots available.

The first 19 lots consist of wine tax stamps, including some of the rarest. On offer in this group is an unused stamp from 1951-54, the series of 1941 1 7/10¢ offset-printed stamp (Scott RE182F), of which only three unused and two used examples are recorded.

Siegel describes this example as “very fine and choice,” without gum as issued. The stamp is listed in the Scott U.S. Specialized catalog with a value in italics of $22,500, the italics signifying an item that can be difficult to value accurately.

The beer tax stamps similarly feature a number of rarities, with some unique errors among the stamps on offer.

The 1875 and 1878 25¢ quarter-barrel stamps with black center design inverted (Scott REA32a and REA39a, respectively) are the only recorded examples of these major errors, according to Siegel. They are two of the three known beer stamps with inverted centers, Siegel notes, with the third being an 1875 12½¢ one-eighth barrel stamp (REA36a)that resides in a private collection.

The central design of the green and black 1875 invert shows Bacchus serving the first fermented brew to man. In this case, the black vignette and surrounding lettering on this stamp printed by National Bank Note Co. is upside-down in relation to the green frame.

Siegel describes the stamp as one of the most widely recognized beer stamp rarities and the first beer stamp invert to be discovered.

The 1878 25¢ invert honors Thomas Hart Benton, a five-term senator from Missouri who died in 1858. Though the stamp was printed by the U.S. Bureau of Engraving and Printing on green paper, it resembles the National Bank Note invert that preceded it, with the black imprint in the center, including Benton’s portrait, inverted in relation to the green frame.

The stamp was once owned by collectors Henry Holcombe and Robert H. Cunliffe, the Weill Brothers, and (possibly) Philip H. Ward.

“We believe this is the stamp’s second appearance at auction,” Siegel notes.

Both of the invert stamps are listed in the Scott U.S. Specialized catalog at $55,000, again with the value in italics.

There are two examples known of the intact 25-barrel fermented malt liquor stamp surcharged by handstamp to $225 in 1951, the last beer stamp issued by the United States (Scott REA199). One of them is offered in the Siegel sale, listed with the assigned Scott catalog value of $27,500 (which Scott again has in italics). Siegel describes the stamp as having large margins, rich color, and a tiny soiled spot in the margin at lower left.

The 46 lots of silver tax stamps in this sale consist primarily of remarkable single stamps, but also include what Siegel describes as the unique piece of a silver tax transfer form bearing three of the 1939 issue, including the only recorded 3¢ stamp.

The stamps are tied to the document piece by a purple dated Internal Revenue handstamp. On the reverse are printed text from the transfer form and typewritten responses.

The 10¢ and 80¢ stamps also are rarities, with two recorded of the former and three of the latter.

Siegel calculated the Scott catalog value at $90,000 for singles, with no premium for the piece of document.

The lots in both of these upcoming Siegel sales can be viewed online and other bidding options available.