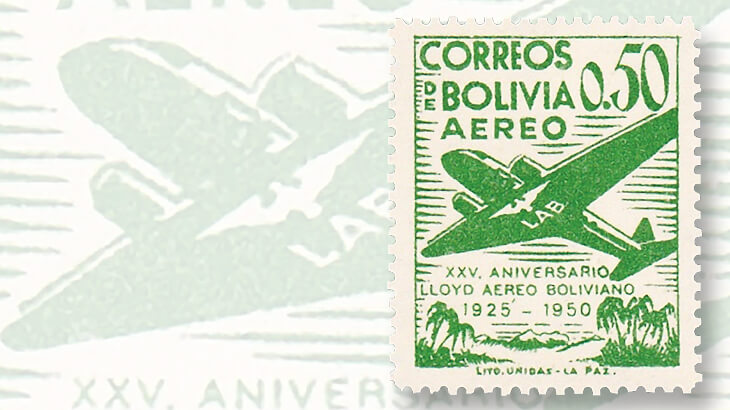 A subtle variety known on the 50c denomination of the 1950 airmail set consists of what looks like an accent mark after “1925.” 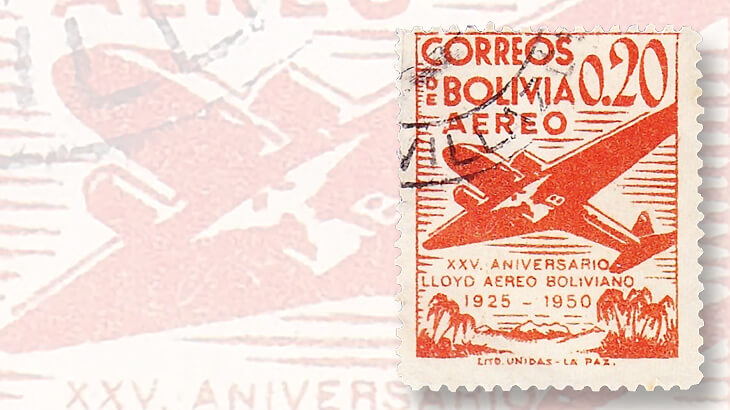 Another variety in the 1950 airmail set marking the 25th anniversary of the Bolivia national airline, LAB, consists of a white spot below the condor, obscuring the “A” in the three initials. It is known on the 20c and 30c denominations. 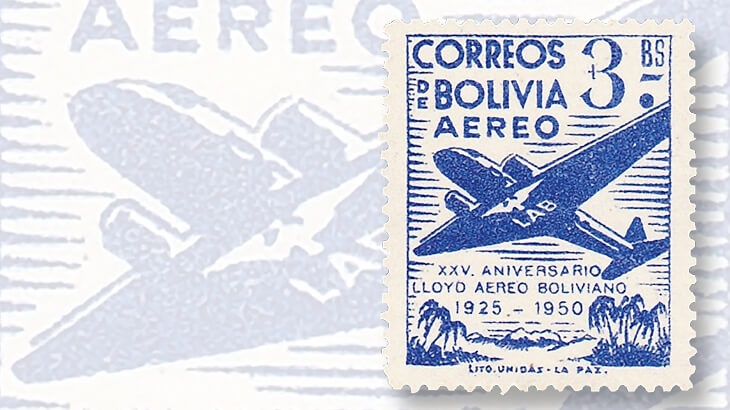 A dot after “1925” is another flyspeck variety in Bolivia’s 1950 airmail set. This variety is known on the 3-boliviano denomination. 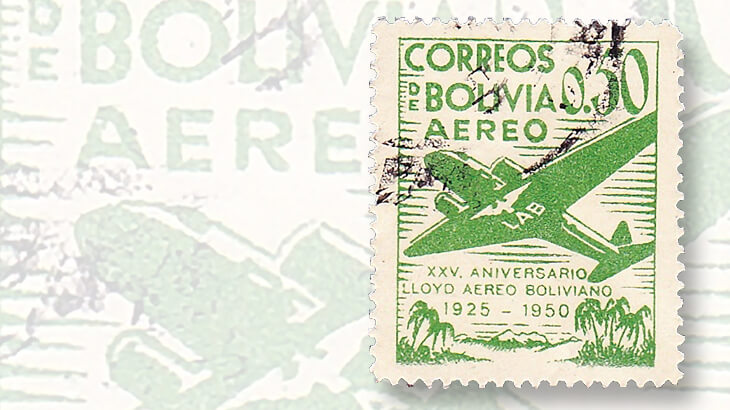 This variety in the 1950 set of Bolivia airmail stamps is missing the printer’s imprint (“Lito. Unidas – La Paz”) in the bottom margin. The variety is known on the 50-centavo denomination 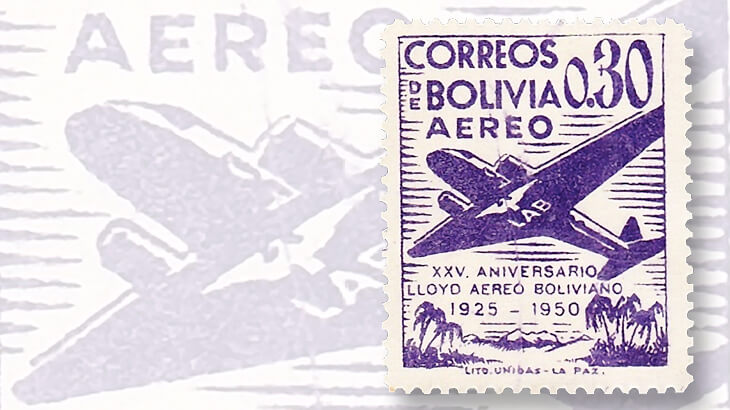 A scratch slanting from the “L” in “BOLIVIA” and down into the mountains at the bottom of the design is a variety that turned up on a 30-centavo stamp in the author’s duplicates.
Previous
Next

You have to be careful when trolling online auction and commerce websites. Ill-described and mispriced items abound, but in the process you might learn something.

I frequently look at some of these sites, such as eBay, both to see what is on offer and to see what I might learn.

In 1950, Bolivia issued a set of seven lithographed airmail stamps (Scott C130-C136) to commemorate 25 years of service by the national airline, Lloyd Aereo Boliviano (LAB), which was founded Sept. 15, 1925.

The stamp denominations range from 20 centavos to 50 bolivianos, and the common design, in a different ink color for each denomination, depicts a Douglas DC-3 airplane ascending over the mountains and forested lowlands. The text reads, “XXV. ANIVERSARIO LLOYD AEREO BOLIVIANO 1925-1950.”

A condor with wings spread is pictured on the bottom of the plane, with the letters “LAB” below. At the foot of the stamp is the printer’s imprint: “Lito. Unidas – La Paz.”

A quick survey of the eBay and Delcampe auction websites revealed that only about 16 percent of their 1951 airmail covers were franked with the LAB anniversary stamps, and most uses were in combination with other stamps.

What makes these stamps interesting is the printing varieties.

CEFILCO: Catalogo de Sellos Postales de Bolivia, the specialized country catalog, lists a number of printing varieties, the most spectacular being imperforates of the 30c, 50c and 15b stamps, and the missing printing imprint in the bottom margin of the 50c value.

The CEFILCO catalog also lists a white spot at the base of the condor image that obscures the letter “A” of “LAB.” The white spot variety is known on the 20c and 30c denominations.

Then there are some flyspeck varieties, including what looks like an accent mark after “1925” on the 50c denomination, and a dot between “1925” and the dash before “1950” on the 3b denomination.

While looking for varieties among my duplicates of this set, I came across one on the 30c denomination in which there appears to be a scratch or line slanting downward from the “L” of “BOLIVIA” through the airplane and on down into the mountains. This stamp is pictured in the final illustration here.

It is always fun to look for varieties, and specialized catalogs will give you an idea of what to watch for as you prowl websites and sift through dealers’ stocks.

Online tools and resources for researching your stamp collection