Only some Columbian stamps for sale: stamp dealer responds via postal card

Figure 2. Contrary to the hopes of some, the dollar denominations of the Columbian issue, three of which are shown here, have become highly sought after and have price tags to match. 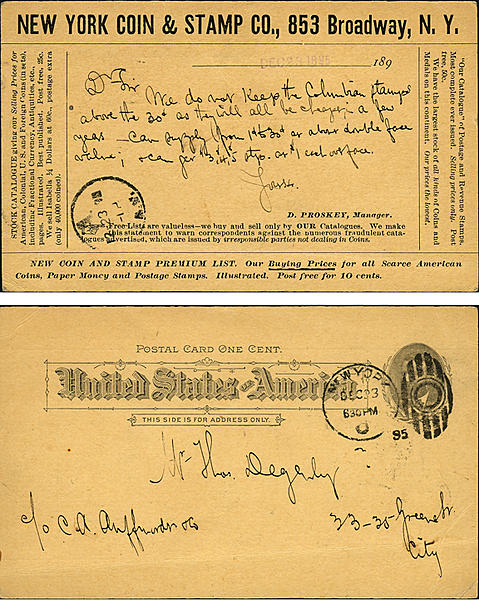 Figure 1. Using the 1891 1¢ Grant postal card as an advertising card, the manager of the New York Coin and Stamp Co. told a customer he expected the 1893 Columbian issue stamps above 30¢ face value to become cheaper as time went on.

The U.S. Notes column in the Nov. 19, 2012, Linn’s highlighted a 1901 penny postal card with an offer to buy used stamps from the Columbian issue.

After that article was published, reader Bob Young sent a related card, shown back and front in Figure 1.

The store manager responded by writing: “Dear Sir, We do not keep the Columbian stamps above the 30¢ as they will all be cheaper in a few years. Can supply from 1¢ to 30¢ at about double face value; and can offer $3, $4, $5 stamps at $1 each over face.”

What led the manager to believe the prices would drop in coming years? Or might this have been a negotiating ploy? We do know that the Columbians were not met with universal praise when issued.

Some serious collectors even called for a boycott on the set as being largely unnecessary. The dollar denominations especially were thought to be excessive to any postal need, with no other purpose than to raid the wallets of collectors.

It is possible that dealers expected that collectors who bought the stamps right after issuance in 1893 would actually be stuck with high volumes that would be tough to sell even at face when the boycott took hold.

Here we are 120 years later. We can all afford the used values up to about the 50¢ stamp, but beyond that, it is difficult to fill those spaces.

What it proves, if anything, is that the collecting public is diverse enough to hate a stamp upon issue, but can grow to love it as time goes by.