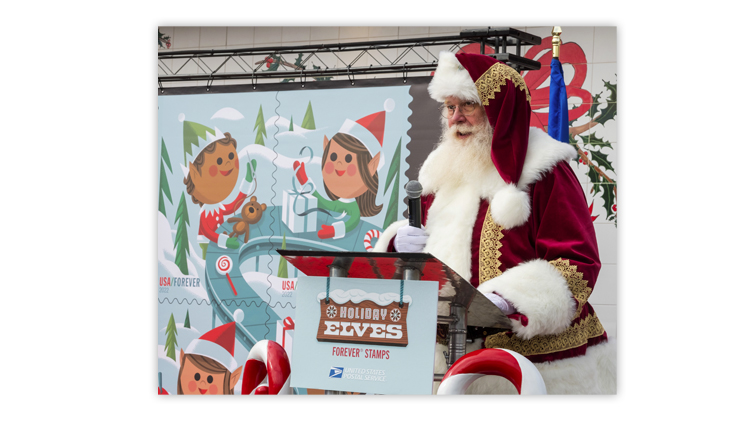 Santa Claus was recently on hand to announce the start of the United States Postal Service’s Operation Santa program for underprivileged children and families. Image courtesy of the U.S. Postal Service.

The change was announced Sept. 15 in North Pole, Alaska, where the Postal Service held the first-day ceremony for its four Holiday Elves stamps.

“We know this is earlier than usual, but we’re pretty excited to get the season started and we know kids around the country are eager to write Santa,” said Michael Elson, secretary to the Postal Service’s board of governors.

Elson was the dedicating postal official at the first-day ceremony.

The program encourages children to write letters to Santa and then shares their letters with individuals willing to help the families with their Christmas wishes.

Last year, the program opened Nov. 1. Postal Service spokeswoman Sue Brennan said that for this year, the date was advanced to Sept. 15 in “an attempt to get more usable letters into the system by Nov. 28.”

That’s when the Santa letters are made available “for adoption,” she said.

“Many thousands of letters couldn’t be posted last year because key pieces of information were missing — mainly return addresses,” she said.

The Postal Service expects that increasing the time to send letters will result in a massive flow of letters for customers to adopt on Nov. 28.

Last year, the USPS had only 2,500 letters available on the Nov. 28 opening day, and all were adopted within 10 minutes.

Letters containing Christmas wish lists must include the writer’s first and last names and a complete return address.

The letter must carry a forever postage stamp and should be addressed to Santa Claus, 123 Elf Road, North Pole, 88888.

Letters to Santa must be postmarked by Dec. 12.

Dec. 21 is the last day to adopt letters. The USPS recommends mailing packages containing gifts from the wish list in the adopted letter by this date.