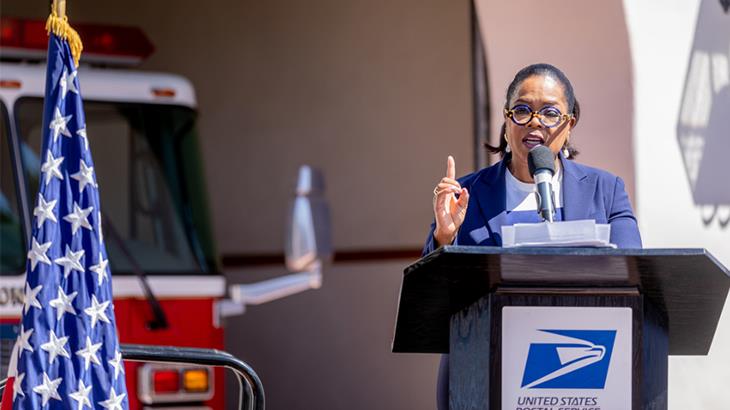 Oprah Winfrey spoke passionately about the heroism of first responders in the recent Montecito tragedies. Photo by Fritz Olenberger. 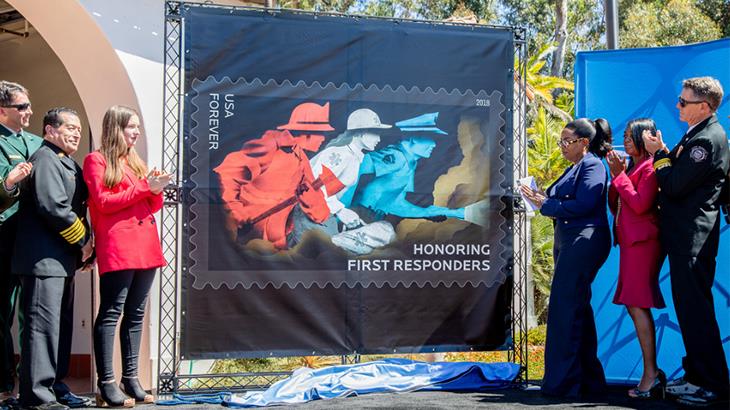 The Honoring First Responders stamp was unveiled at the Montecito Fire Protection District headquarters. Photo by Fritz Olenberger.
Previous
Next

One day after the Sept. 13 first-day ceremony for the Honoring First Responders forever stamp in Missoula, Mont., the stamp was dedicated again in Montecito, Calif.

The event was held at the Montecito Fire Protection District headquarters and featured remarks from Oprah Winfrey. The media leader and philanthropist is a local resident.

The Sept. 14 gathering recognized those who rushed to aid during the Thomas fire at the end of 2017 and the Jan. 9 debris flow that followed. The fire burned more than 280,000 acres in Ventura and Santa Barbara counties, and the mudslides killed 21.

“There just aren’t enough words — or emotions, actually — to describe the heart, the soul and the fortitude required to sign up to be a first responder,” Winfrey said.

“To be the kind of human being that says, ‘Take me; I’ll go. I’ll do the opposite of what all the other human beings really want to do … I will embrace the danger, and then wrestle it.’ I’m here on behalf of our community to say that your actions define what it means to be a hero. It’s a word, but you all have lived it out loud,” Winfrey continued.

Lauren Cantin, a teenager who was rescued from mud by first responders, sang God Bless America at the ceremony.