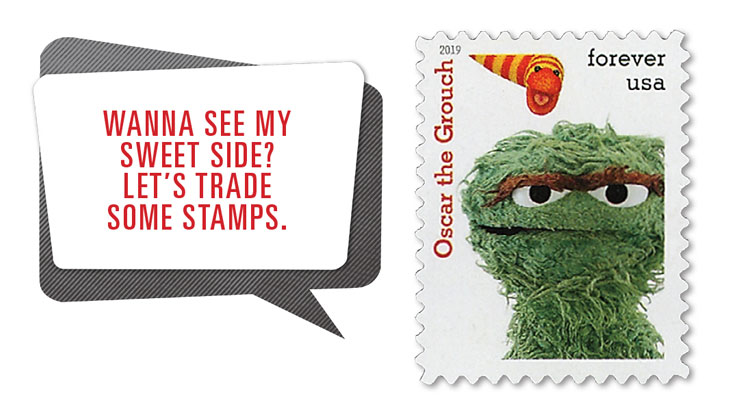 The winner of the philatelic part of the November cartoon caption featuring the 2019 Oscar the Grouch stamp is Reid Hinson of Kill Devil Hills, N.C., who holds out hope that Oscar may not be such a grouch after all. The next cartoon caption contest will b

Reflecting the times, many of the entries in the November cartoon caption contest featuring the Oscar the Grouch stamp from the 2019 pane of 16 characters from Sesame Street, used his personality to make points for or against the major party candidates for president.

A few of the submitters of that type of entry said that they were just getting things off their chests and didn’t expect the entry would be printed. They were right! These were partisan election comments which, of course, can’t be used. That eliminated about one-third of the entries.

Moving along, another third of the entries also had a political theme but in a nonpartisan way. For example, Rosemary Harnly of Red Wing, Minn., proposed, “For election season, be politically correct and call me Oscar The Curmudgeon!”

Steve Kotler of San Francisco, Calif., referenced Oscar’s dwelling as the basis for “I like to discuss politics because I know so much about talking trash!”

A group of entries focused on the reasons for Oscar’s grouchiness.

Representing this group is Mary Lou Moseley of Owensboro, Ky., who had Oscar complain: “The Count went to our Halloween party and won first prize. He didn’t even have to wear a mask!”

Kenny Moore of Rocklin, Calif., had Oscar comment, “I’d be a lot less grouchy if we stamp out email.”

A fair share of entries related to COVID-19. From Terry Reason of Wilkinson, Ind., comes, “How am I supposed to wear a mask when I don’t have ears?”

For the philatelic part of the contest, Reid Hinson of Kill Devil Hills, N.C., wins the prize with a line that flips Oscar’s personality.

For the nonphilatelic part of the contest, the honor goes to the Rev. George Schaetzle of Sheboygan, Wis., for “It’s getting harder to find nice new galvanized trash cans. It’s all plastic nowadays!”

“Really? The USPS wants me to put up a mailbox with a numbered street address?” from R. Bialo of Cary, Ill.

“I love telling people where to stick their stamps,” from Dale Stout of Colorado Springs, Colo.

“Yuk! I’m in a pane of stamps surrounded by happy people,” by Mildred and Doug Barylski of Warrenton, Va.

“Hey, What’s with designating my trash can as an official ballot drop-off box?” from David Vikan of Dickinson, N.D.

“If I had it to do over again, I would have auditioned for the Frog’s part!” from Tim Collins of Antioch, Ill.

Thanks and a tip of the hat to all who entered. The next contest will be announced in the Jan. 11, 2021, issue of Linn’s.

Time to talk turkey for the December cartoon contest