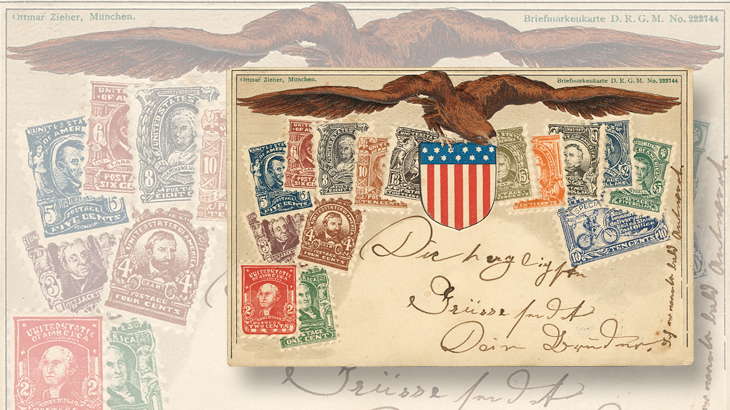 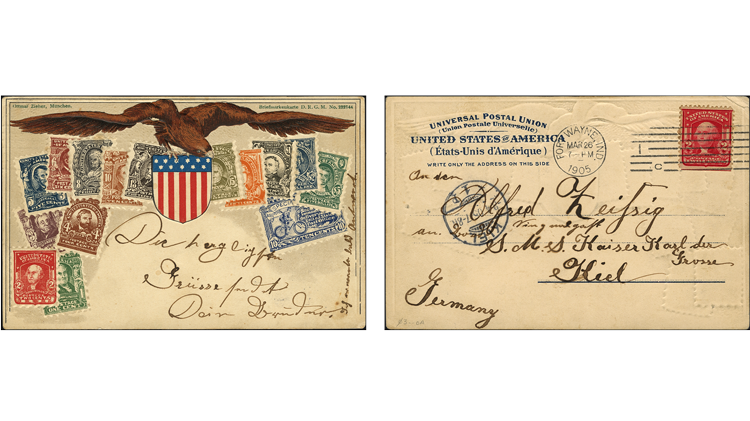 Ottmar Zieher of Germany produced a series of postcards showing the stamps of more than 100 nations. United States stamps of the Second Bureau issue are pictured on this postcard used in 1905. 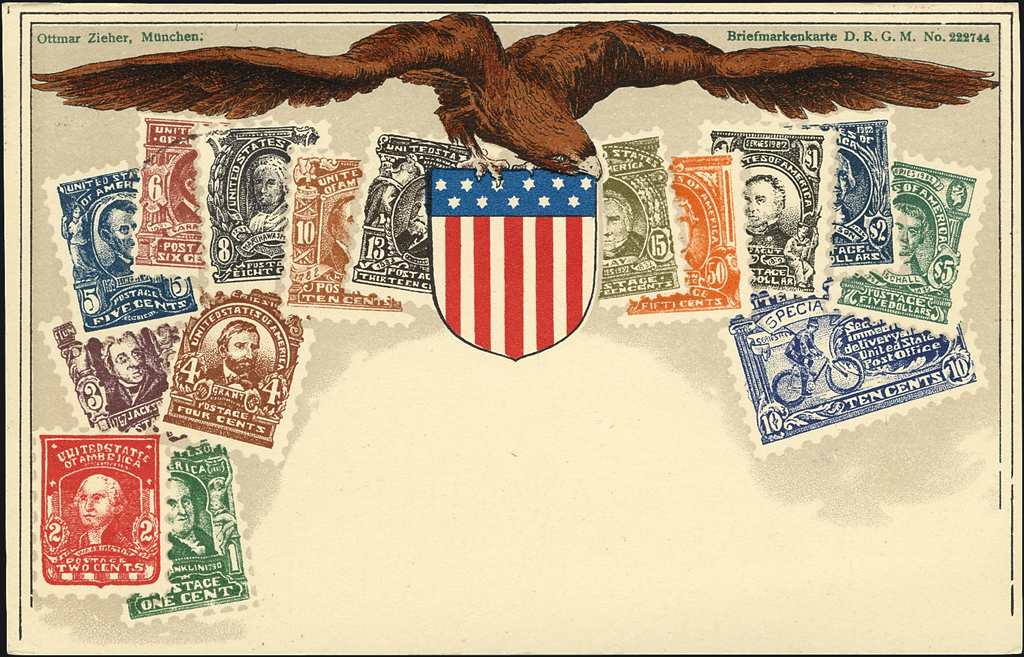 This reprint used in 1928 in Czechoslovakia faithfully reproduces the front of the Ottmar Zieher card, but lacks the embossing. 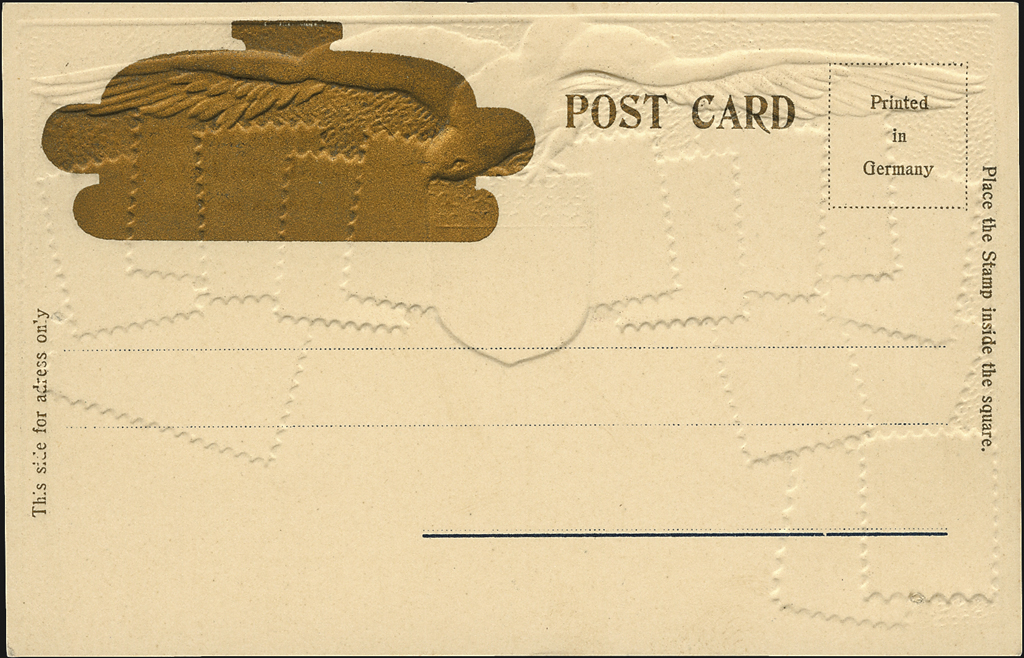 This postcard features the same design of U.S. Second Bureau issue stamps on the front, but on the back, a gold imprint in the shape of a serving dish covers the Universal Post Union and United States of America text at upper left. 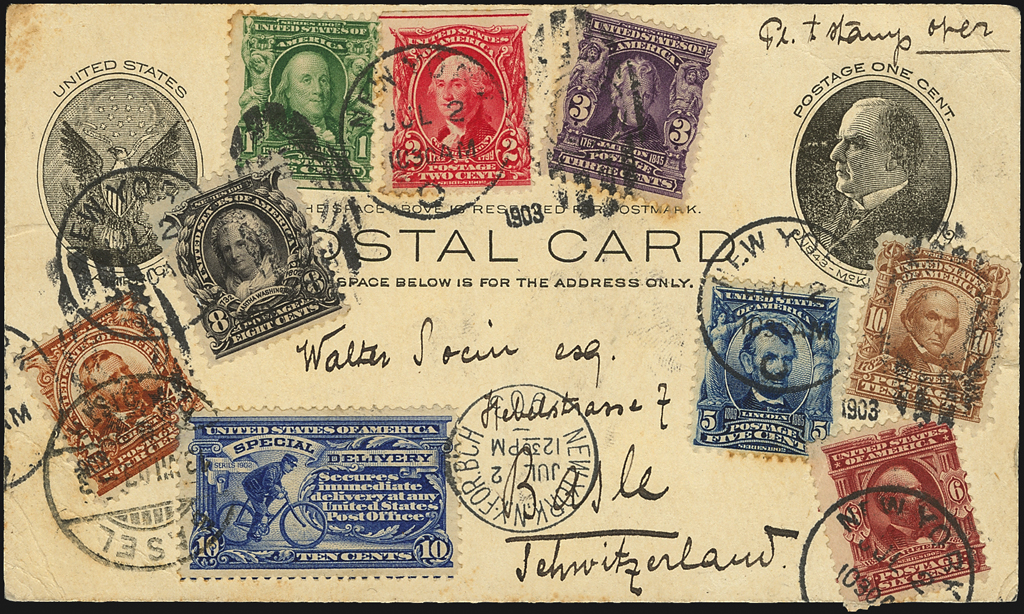 Sent in 1903, this postal card mimics the Zieher card, although it is missing the higher values of 13¢ and up from the Second Bureau issue.
Previous
Next

The postcard shown nearby features color images of the United States 1902-03 definitive issue, known as the Second Bureau issue (Scott 300-313), and the 1902 10¢ Messenger on Bicycle special delivery stamp (E6).

The inscription in the upper left names the producer of the card, Ottmar Zieher of Munich, Germany.

Zieher was a well-known pre-World War I postcard publisher, and also produced a series of more than 100 similar postcards picturing the stamps of other countries. Some larger countries were represented several times using different stamp sets.

It is evident by looking at the address side of the card that the stamp images are embossed.

If all of this looks and sounds familiar, it is because this card has been pictured in this column before, although it has been a few years.

After reading that column in the May 7, 2007, issue of Linn’s, Roger Brody, who has collected the Second Bureau issue in detail, wrote to inform me of two other versions of the postcard.

One has the same embossed front, but on the back, or the address side, it has a gold overprint on the original imprint at the upper left.

Another version seems to be a much later reprint. The front is the same design as the previous two, but without the embossing.

I have two versions of this postcard, both used in Czechoslovakia. On one used in 1928, the text is in blue. Another, used in 1934, has the text in dark green. The 1928 blue version is shown nearby.

Both have the Zieher inscription at upper left, but I believe the Czech publisher simply appropriated the design and text from the original version, and that these two postcards have nothing to do with Zieher.

At the time these postcards originally were sold, the U.S. Post Office Department did not believe in the adage that any publicity was good publicity. In fact, there was an official ban on any illustration of U.S. stamps, either in black-and-white or in color, at full size.

The stamps on the Zieher postcards are not quite full size — they were calculated to be about “29/32nds” by Bob Jones, writing in the U.S. Forum column in Linn’s of Oct. 19, 1970. But even overlapped, the stamp images are clear. Only the 2¢ Shield design, which replaced the original 2¢ Second Bureau issue design, is complete.

Whether the Post Office Department found any of these postcards in the U.S. mail and confiscated them as illegal is not known, but used examples in the United States are very scarce.

An even greater rarity, shown nearby, was provided by postal history dealer and former Linn’s senior editor Rob Haeseler.

This 1902 1¢ McKinley postal card (Scott UX18) mimics the Zieher card, though with actual postage stamps instead of illustrations of them. Also, the 13¢ through $5 stamps of the Second Bureau issue were not included.

It’s of interest to note that the original design of the 2¢ Washington stamp is used, not the redesigned version.

The postal card was mailed in 1903 from New York City to Basel, Switzerland.

The total face value of the stamps affixed to the postal card is 50¢, much more than the 2¢ postage then needed to carry the card to Europe.

This type of philatelic memorabilia makes a wonderful addition to a stamp collection.

If you write, please include a stamped addressed envelope if you wish to receive a reply.