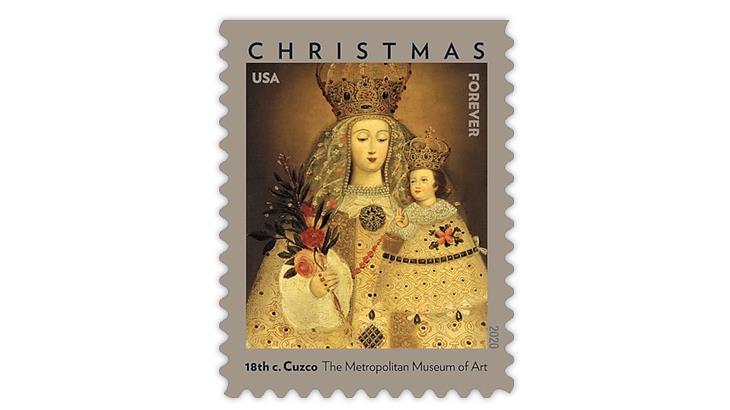 The United States Christmas: Our Lady of Guapulo forever stamp will be issued Oct. 20 in a double-sided pane of 20. 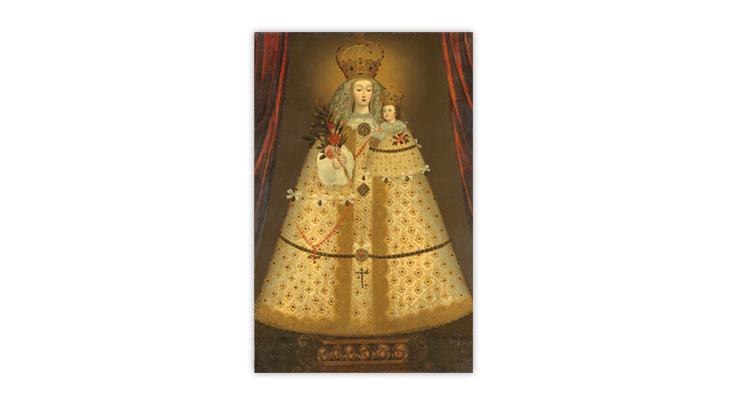 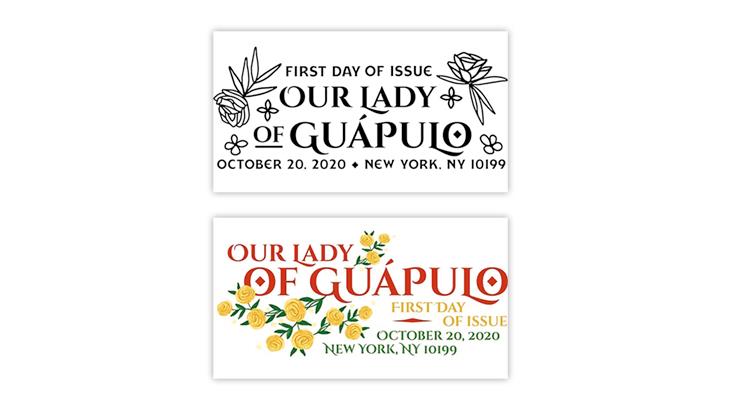 The 2020 traditional Christmas stamp from the United States Postal Service will be issued Oct. 20. The nondenominated (55¢) forever stamp will be sold in a double-sided pane of 20, described as a booklet by the Postal Service.

The illustration shows a detail from an 18th-century oil-on-canvas painting titled Our Lady of Guapulo. The identity of the artist is unknown, but the artist’s location is given as Cuzco (also known as Cusco), Peru.

“Enrobed in a pyramidal gown speckled with jewels and holding a scepter woven with roses and leaves, a crowned Virgin Mary looks down at a similarly adorned Christ Child in her left arm,” the Postal Service said in its description of the painting. “A red rosary ropes across the center of her dress and down to her right.”

The painting is in the collection of the Metropolitan Museum of Art in New York City, displayed in its Fifth Avenue Gallery 757.

The full painting shows the entirety of Mary’s gown and other details, including the framed faces of six cherubs peeking out near the bottom of the artwork.

Guapulo is a district or parish of Quito, Ecuador, almost 2,000 miles from Cuzco. Guapulo is home to the Our Lady of Guapulo Franciscan Sanctuary built in the second half of the 17th century.

The museum notes that the painting is named for the sanctuary, “where the miracle-working image was venerated.”

New York City, where the painting is displayed, is the designated first-day city for this stamp issue. The Postal Service has suspended its in-person first-day ceremonies since March in response to the COVID-19 pandemic, but it has hosted several virtual events on its Facebook and Twitter pages.

Two pictorial first-day cancels will be offered for the Christmas: Our Lady of Guapulo stamp. Both the black and the digital color postmark show the title of the painting in larger letters, with images of roses adorning the lettering.

The rose is a symbol that has a long association with the Virgin Mary. According to the University of Dayton, the rose was adopted as the emblem of Mary’s love of God.