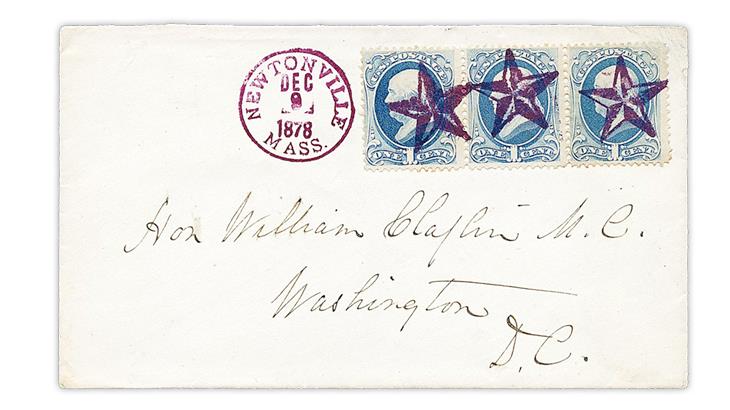 This 1878 cover featuring three bold strikes of a purple five-point star fancy cancellation from Newtonville, Mass., will be up for bids during Robert A. Siegel Auction Galleries’ Oct. 19-23 sale of outstanding United States stamps. 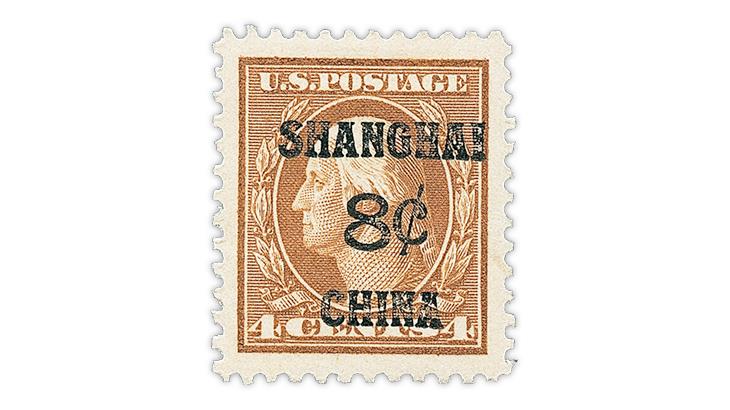 The Oct. 19-23 Siegel sale features a choice selection of U.S. 1917-19 definitive stamps surcharged for use from the Postal Agency in Shanghai, China. Among the highlights is this 8¢-on-4¢ stamp with exceptional centering and unusually large margins.
Previous
Next

Collectors seeking to acquire quality United States stamps across all time periods will have ample opportunity during a five-day sale to be held Oct. 19-23 by Robert A. Siegel Auction Galleries in New York City.

Due to restrictions because of the COVID-19 pandemic, attendance will be limited and by prior approval from Siegel. Live bidding will be by telephone or internet.

The Yudowitz collection is being sold for the benefit of the Michael J. Fox Foundation, Siegel said.

On Oct. 20, during the morning session, Siegel will offer 67 lots of gold coins immediately following the sale of the Dauer collection of encased postage.

In the description of the essay, Siegel states it was originally attributed to Rawdon, Wright, Hatch and Edson, the printer of the U.S. 1847 issue. In 2007, research by Roy Weber determined that the firm of Henry C. Benner in Washington, D.C., created the essay.

Siegel is offering the Benner essay at the Scott Specialized Catalogue of United States Stamps and Covers value of $4,500. The value is in italics to indicate an item that can be difficult to value accurately because it appears in the marketplace infrequently.

Enthusiasts of fancy cancellations will want to review the 41 lots showcasing these popular markings on the 1869 Pictorial and 1870-88 Bank Note issues.

A cover mailed Dec. 9, 1878, from Newtonville, Mass., to Washington, D.C., is franked with a horizontal strip of three 1¢ ultramarine Benjamin Franklin stamps (Scott 156) bearing three bold strikes of a five-point star fancy cancel in what Siegel describes as “an exceptionally deep shade of purple.”

Although not readily apparent, the cancels on the left and right stamps in the strip tie the strip to the cover. Cancellation ink can be seen in four of the perforation holes between the first and middle stamps, and the right point of the star on the right stamp just ties that stamp to the cover.

Siegel notes that the cover is addressed to William Claflin, who served as governor of Massachusetts from 1869 to 1872 and as a member of Congress from 1877 to 1881.

A 2011 Philatelic Foundation certificate accompanies the cover, which is listed with an estimate of $400 to $500.

In 1919 the U.S. Post Office Department surcharged stamps from the 1917-19 definitive (regular-issue) series for use at the U.S. Postal Agency in Shanghai, China.

According to the Scott U.S. Specialized catalog, the stamps were surcharged “at double the original value of the stamps.”

“These stamps were intended for sale at Shanghai at their surcharged value in local currency, valid for prepayment on mail despatched from the U.S. Postal Agency at Shanghai to addresses in the U.S.”

The morning session on Friday, Oct. 23, features a handsome selection of these surcharged stamps, which are difficult to find well centered.

A choice example that will cross the auction block is a surcharged 8¢-on-4¢ Offices in China stamp (Scott K4) that Siegel describes as having “enormously wide and balanced margins.”

In 2011 the Philatelic Foundation assigned the stamp the grade of extra fine-superb 95 Jumbo. The “Jumbo” designation indicates a stamp with unusually large margins.

Siegel is offering the stamp at the Scott catalog value of $55. Given the stamp’s overall condition, it is likely to sell for substantially more than that amount.

Other back-of-the-book areas such as newspaper stamps, revenue stamps, Confederate States, U.S. possessions and federal duck stamps will be offered on Oct. 23.

Closing out the sale will be various collections and accumulations and a selection of philatelic literature from the library of Louis Grunin.

A single catalog has been prepared for the sale. Full details of the auction, including online bidding options, are available on the Siegel website.