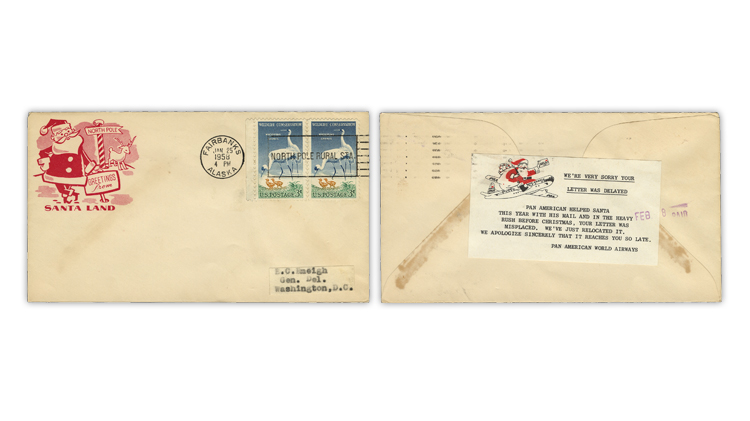 Sent in January 1958, this cover was somehow misplaced by the airline contracted to carry the mail from Alaska to the Lower 48. Pan American World Airways added a printed label to the reverse to explain the delay.

I collect delayed mail and the many auxiliary markings used to explain it, but until the cover shown front and back in Figure 1 crossed my desk, I had never seen a private delay marking.

Pan American World Airways attached an explanation and apology label on the back of the cover. The label reads: “We’re Very Sorry Your Letter Was Delayed. Pan American helped Santa this year with his mail and in the heavy rush before Christmas, your letter was misplaced. We’ve just relocated it. We apologize sincerely that it reaches you so late. Pan American World Airlines.”

The label also includes an illustration of Santa riding atop a Pan American aircraft with an envelope in his hand and a sack of mail slung over his back.

The cover was sent from Fairbanks, Alaska, to Washington, D.C., on Jan. 25, 1958, according to the origination cancellation. The label on the back bears a “Feb 8 PAID” purple handstamp, so the delay was not a long one.

Apparently the spirit of full disclosure was alive and well in the 1950s, so the delay was explained by Pan Am. I wonder how many more used examples of these labels exist? Clearly there were enough delayed covers to warrant the creation of a printed notice.

The Figure 1 cover was franked with two examples of the 1957 3¢ Wildlife Conservation stamp (Scott 1098) and also includes a red cachet showing Santa and reindeer at the north pole.