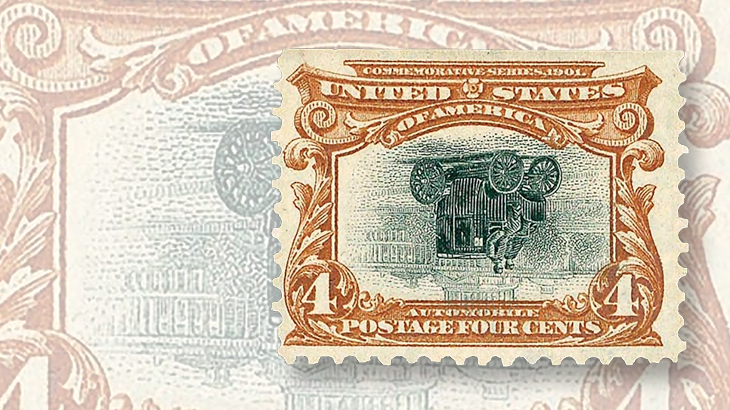 The stamp, which shows an early electric automobile driving around Washington, D.C., has a black vignette in an elaborate deep red-brown frame. Although the 1¢ and 2¢ values of this series exist with inverted centers that arose as bona fide printing errors, the 4¢ invert was actually a special printing, created intentionally.

The Scott Specialized Catalogue of United States Stamps and Covers notes that most examples of this invert, listed as Scott 296a, come with partial or disturbed gum, and the stamp is valued in that condition.

The example in the Aldrich sale, described as “full OG [original gum] which has been hinged,” also has “stunning deep rich color” and a naturally occurring straight edge at the top (many early U.S. stamps were prepared in sheets that lacked a perforated margin on one or more sides). The stamp sold for $18,400, including Aldrich’s 15 percent buyer’s premium.