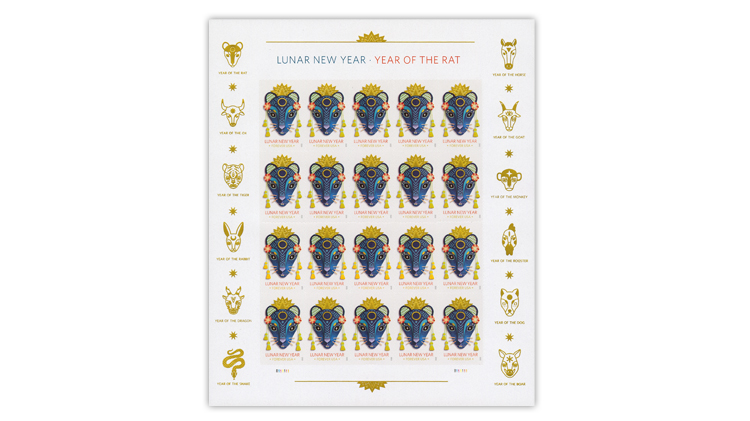 Illustrations in the pane margins of the United States Year of the Rat forever stamp issued Jan. 11 depict the 12 animals of the annual cycle known as the Chinese zodiac. 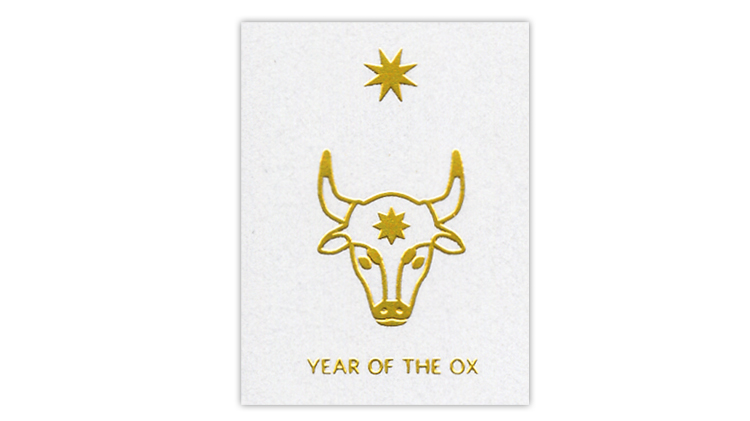 This enlarged image shows the ox that is the second animal portrayed on the left margin of the Year of the Rat pane. 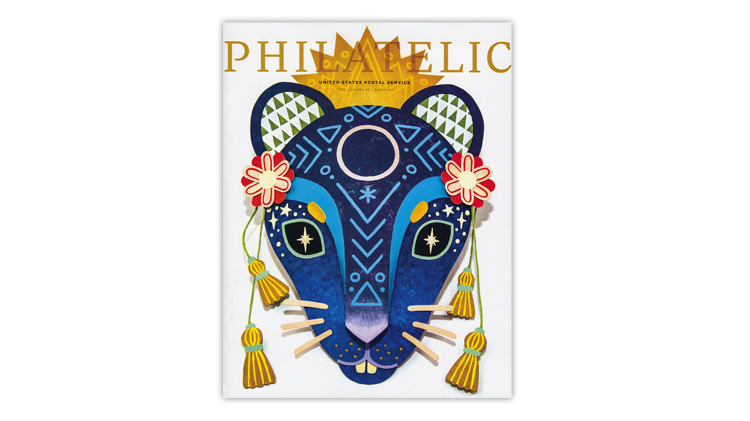 The U.S. Postal Service publication USA Philatelic photographed Camille Chew’s rat mask art and displayed it on the cover of its most recent issue.
Previous
Next

The margins of the United States Year of the Rat forever stamp pane show 12 different simple animal illustrations corresponding to what is popularly known as the Chinese zodiac.

Individuals born in a specific year are said to have certain characteristics, strengths, weaknesses and so on.

The new forever stamp issued Jan. 11 is the first in a series of 12 Lunar New Year stamps. The illustrations in the margins appear to provide a peek at the stamp designs that are yet to come.

The first animal in the margins, at upper left, is the rat, with the phrase “Year of the Rat” printed below it. The illustration and the text are printed in gold.

An eight-pointed star, also in gold, separates the rat illustration from the next depiction, which shows an ox with the phrase “Year of the Ox.”

The simplified rat sketch resembles the much more detailed Year of the Rat stamp illustration by Camille Chew, but many of the ornate details on the stamp are not featured in the sketch.

It seems likely that each of the remaining 11 marginal illustrations is a preview of a more elaborate illustration that will appear on the upcoming stamps.

A Year of the Ox forever stamp is expected in the early weeks of 2021 to correspond with the lunar Year of the Ox, which will begin Feb. 11, 2021.

Kim Hallums, a U.S. Postal Service public relations representative, confirmed to Linn’s Stamp News that Chew designed all 12 masks for the current Lunar New Year stamp series with stylings and features similar to that of the rat on the new stamp.

The Year of the Rat forever stamp features gold foil accents as a crown, and a circular insignia on the rat’s forehead, which the Postal Service explains “represents the new moon on which the Lunar New Year begins.”

The Postal Service also chose to highlight the Year of the Rat stamp design on the cover of the Quarter 1 2020 issue of USA Philatelic, its retail product catalog that includes stamps and related items.

Most noticeable is the position of the two yellow and brown tassels that dangle from each side of the rat’s head.

On the stamp, those tassels are suspended from green yarn or cord in fairly straight lines. On the USA Philatelic cover, those elements are positioned differently, with one suspended tassel crossing over its companion.

The catalog cover illustration shows the delicate pattern on the rat’s crown that is reproduced as embossed details on the gold foil of the stamp design.

Banknote Corporation of America, a Postal Service contractor, printed the Year of the Rat stamps by offset lithography with flexographic foil stamping on the Gallus RCS press. The stamp includes a microprinted “USPS” in black directly below the yellow and brown tassel near the far right edge of the vertical stamp.

Charles Snee reported additional information about the Year of the Rat stamp including production and other technical details in the Jan. 6 Linn’s Stamp News.