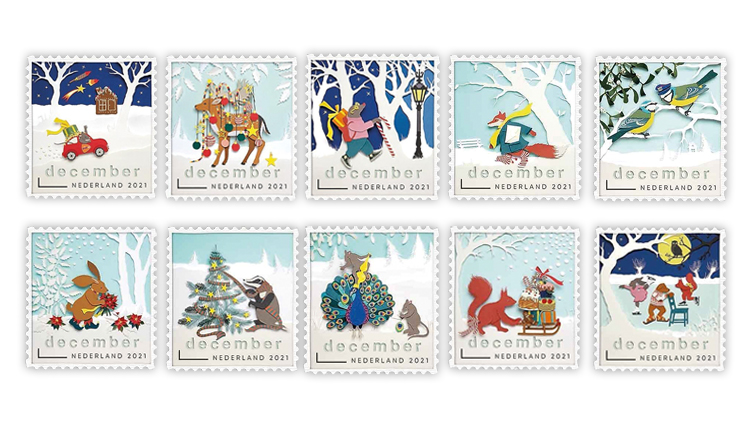 Each year, the Netherlands’ PostNL issues stamps that can be used to send Christmas and New Year cards at a reduced rate. Paper cutting artist Geertje Aalders illustrated this year’s stamps, which were issued Nov. 15. The 10 different designs show personi

Customers can use these stamps, issued at the special December rate of €0.91, from Nov. 15 to Jan. 6 without having to add any postage. After that date, customers will have to add €0.05 of postage to meet the standard domestic rate of €0.96.

The December stamps are sold in panes of 20 (10 of each design). Postal customers who purchase two of the 20-stamp panes will receive a free ornament in the shape of a car that appears on one of the stamps, according to PostNL.

The artwork on these stamps is in a style called paper cutting. A press release from PostNL explained that this style of art has been in use since the third century B.C. Various Dutch artists famous in the 17th and 18th centuries used this style, and it remains popular in the Netherlands.

“The Paper Cutting Society was founded in the Netherlands in 1983,” the press release said. “In 2013, the society was granted the right to bear the UNESCO logo after paper cutting was placed on the Dutch National Inventory of Intangible Heritage as a craft.”

Each of the 10 stamps in this issue shows one or more animals engaging in some kind of December activity. In one illustration, two mice work to decorate a peacock. In another, a squirrel pushes a sleigh stacked high with presents, treats and decorations. A third option shows a rabbit, dog, and squirrel ice skating (or trying to, in the case of the dog), while an owl looks on from a perch on a branch.

Each stamp has a lowercase “December” seemingly stenciled out of white paper below the image. Black text states the country and year. Aside from the colorful animals, most of the background appears to be the white paper cutouts. Various shades of blue in the sky help to indicate what time of day it might be in each scene.

Corine Zwier designed the stamps from Aalders’ illustrations. Joh. Enschede printed them by offset in a quantity of 3,615,00 panes of 20. Each stamp measures 26.5 millimeters by 29mm.

The December stamps can be used on domestic mail weighing up to 50 grams, which is an increase from the usual limit of 20 grams for other stamps at other times of the year. For international mail, customers can simply use two December stamps.