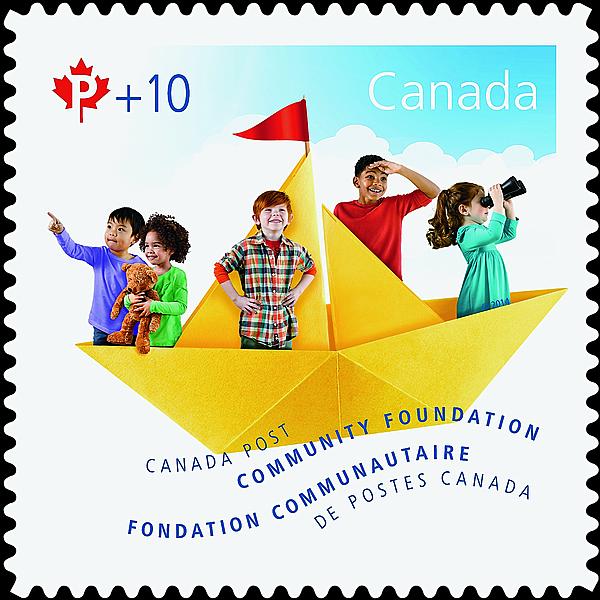 Canada Post will issue a nondenominated (85¢)+10¢ permanent semipostal stamp Sept. 29 to support the work of the Canada Post Community Foundation.

It is the third stamp issued on behalf of the foundation, which was established in 2012.

The foundation focuses “on supporting children’s charities and school programs — including organizations that provide mental health initiatives aimed at youth,” according to Canada Post.

Canada’s new semipostal shows a photograph of five children standing in a large sailboat made of folded paper. A little girl at left is holding a teddy bear. A girl at right is looking through binoculars.

The stamp is inscribed “Canada Post Community Foundation” in English and in French.

Canada issued 12 semipostal stamps from 1974 to 1976, with the surtax benefitting the Canadian Olympic Committee (Scott B1-12).

A 45¢+5¢ semipostal issued in 1996 provided funds to the ABC Canada literacy organization (Scott B13).

Since 2008, Canada Post has issued one semipostal annually as a permanent stamp with a 10¢ surtax. The 2008-11 issues benefitted the Canada Post Foundation for Mental Health (Scott B14-18).

The 2012 semipostal (Scott B19) was the first issued on behalf of the newly established Canada Post Community Foundation; another was issued in 2013 (B20).

The new semipostal is printed in a quantity of 3 million by Lowe Martin using six-color offset lithography on Tullis Russell paper, with general tagging on all four sides. The stamps have serpentine die-cuts.