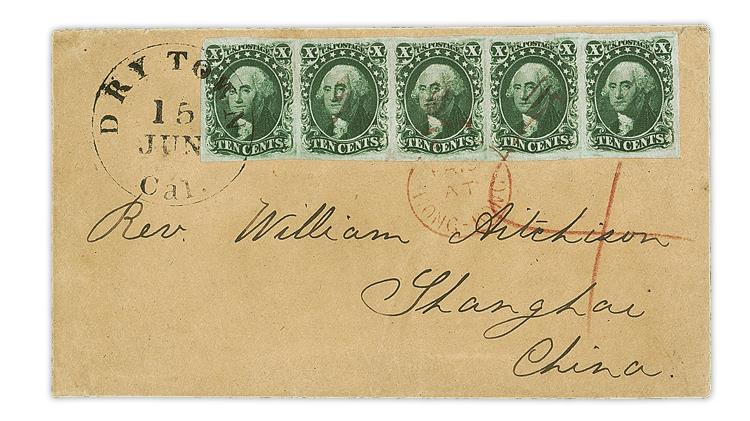 The unique 1857 Drytown cover to Shanghai, China, is one of the choice rarities that will be up for bids Dec. 16 when Robert A. Siegel Auction Galleries offers the first part of the spectacular Magnolia collection of United States mail in China and Japan. 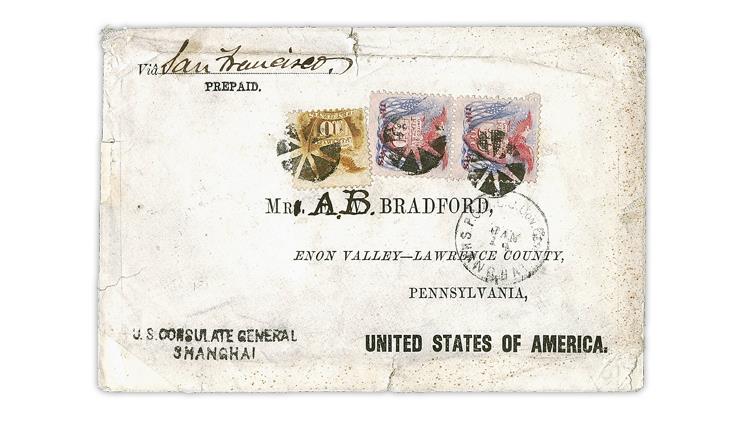 Included in Siegel’s Dec. 16 Magnolia collection sale is the famous Bradford cover sent in January 1871 from Shanghai, China, to A.B. Bradford in Enon Valley, Pa. The three U.S. 1869 Pictorial stamps, a single 10¢ yellow and a vertical pair of the 30¢ ult
Previous
Next

On Dec. 16 Robert A. Siegel Auction Galleries in New York City will offer the first part the impressive Magnolia collection of United States mail in China and Japan.

Simply put, it is the finest collection of its kind to be formed in at least a generation.

“The American collector who formed the Magnolia collection began in earnest about 20 years ago,” Siegel said in the introduction to the sale catalog.

“Over the past two decades, in the face of often brutal competition, he succeeded in building one of the most comprehensive collections of this subject ever formed, capturing numerous major items from famous collections at auction and in privately negotiated sales.”

Because of the collection’s unparalleled breadth and depth, it will be offered over multiple sales, Siegel said.

Siegel president Scott Trepel told Linn’s Stamp News that there likely will be four more Magnolia sales spread over a period of 12 to 18 months.

The 103 lots in this first sale include some of the finest and most consequential covers in the collection. “It’s a feast,” Trepel said.

Before digging into this philatelic feast, however, it’s essential to understand the history and importance of what is on the menu.

Potential bidders should take the time to read carefully the catalog introduction, which provides a compact review of the history of the three periods (pre-treaty, interim consulate and post office) that encompass early mail communication between the United States and China and Japan.

Also included are summaries of historical developments in China and Japan that ultimately precipitated the various postal treaties and associated agreements that made the covers in the Magnolia collection possible. Many of the covers in the sale represent uses for which very few examples are known, and some of the covers are considered the finest recorded example of a given use.

One such rarity, known to collectors as the unique Drytown cover, is an envelope franked with a strip of five of the 1855 10¢ green type III George Washington (Scott 15) that is the earliest recorded trans-Pacific cover from the United States to the Far East franked with stamps.

The cover was mailed June 15, 1857, from Dry Town, Calif., to the Rev. William Aitchison in Shanghai, China. Siegel notes that the four stamps at right have had the pen cancels on them lightened.

Other markings on the cover include a red British “Paid at Hong-Kong” crown and circle handstamp and a red crayon “4” to indicate the British 4-penny prepaid rate to Hong Kong.

According to Siegel, the cover originated in Willow Springs, Calif., a gold mining town that was about 5 miles from Dry Town.

“For some reason, the Drytown postmark was applied about one month after the letter was written by Frank A. Gill on May 17, 1857 (based on docketing),” Siegel said in its description of the cover.

“It was prepaid 50c with a strip of 10c 1855 Issue stamps, presumably because the sender expected it would be sent to New York for a transatlantic packet and further carriage to China through the British Mail system. The highest rate would have been 50c via Marseilles (45c plus 5c surcharge for mail from California). If sent via Southampton, the rate would have been 38c (33c plus 5c). As it turned out, the San Francisco post office chose an entirely different route.”

Instead the cover was routed through San Francisco and then was placed aboard a private ship for transit to China.

Once the cover arrived in Hong Kong, it was probably received by the U.S. consul, which paid the 4d British postage to Shanghai.

“The British Post Office applied the ‘Paid at Hong-Kong’ crown-circle handstamp and red crayon ‘4’ rate. It was carried on the Peninsular & Oriental Line Lady Mary Wood, departing Hong Kong on October 14 (one day after the Hong Kong backstamp) and arriving at Shanghai on October 20,” Siegel said.

Siegel’s brief biography of Aitchison stated that he arrived in Shanghai Sept. 1, 1854.

“At this time Shanghai was the scene of fighting between Imperial and insurgent forces. Reverend Aitchison spent the next five years doing missionary work and traveling throughout eastern China,” according to Siegel.

The cover once resided in the Emmerson C. Krug collection. In his 1949 inventory of that collection, Stanley B. Ashbrook described the cover as a “gorgeous show piece and one of the finest 10c 1855 covers known.”

Another gem in the Magnolia collection is the famous Bradford cover franked with three 1869 Pictorial stamps: a 10¢ yellow (Scott 116) and a vertical pair of the 30¢ ultramarine and carmine (121). The cover takes its name from the addressee, A.B. Bradford of Enon Valley, Pa.

The three stamps paid seven times the 10¢ rate from Shanghai to the United States. Siegel points out that the cover has “repaired edge tears and clipped corner at lower left.”

Of the roughly 50 covers known with the 1869 30¢ stamp, just four, including the Bradford cover, originated in China or Japan.

The Bradford cover has a pedigreed provenance to go along with its rarity, having graced the Shierson, Riddell, Ishikawa and LeBow collections.

The stamps are tied to the envelope by three strikes of a circle-of-wedges cancellation. A Jan. 14 (1871) Post Office Department U.S. consulate general Shanghai (“P.O.D. U.S. Con. Genl Shanghai”) circular datestamp was applied just below the 30¢ Pictorial stamp on the right. A “U.S. Consulate General Shanghai” handstamp, which Siegel described as an exceedingly rare marking, is at lower left.

According to Siegel, the cover “was mailed from Shanghai in January 1871 by Oliver Bloomfield Bradford, who traveled to Shanghai with his parents in 1861 and was appointed vice consul in 1871. Several years later, Bradford was convicted of tampering with the U.S. mail and subjected to a congressional impeachment review (he was not impeached). Bradford went on to help build China’s first railroad.”

After being postmarked at the U.S. Postal Agency in Shanghai, the Bradford cover was carried aboard the steamer Golden Age, which departed from Shanghai, Jan. 14, 1871, and arrived at Yokohama, Japan, Jan. 21. The cover was then carried on the steamer Great Republic, which left Yokohoma Jan. 23 and arrived at San Francisco Feb. 16.

“The San Francisco post office applied the February 17 circular datestamp on the back and sent it east on the relatively new transcontinental railroad,” Siegel said.

In his 2010 work Ten-Cent 1869 Covers A Postal Historical Survey, former Linn’s editor-publisher Michael Laurence recounted in charming detail his fascination with the Bradford cover, which he first attempted to purchase at a 1961 H.R. Harmer sale when he was a student at Harvard University. As it turned out, Laurence was outbid by Robert A. Siegel himself.

Laurence eventually purchased an 1869 Pictorial cover mailed from Shanghai to the United States that has the same franking as the Bradford cover, making it one of the four known covers from China or Japan bearing 1869 30¢ stamps.

“It’s not nearly as nice as the Bradford cover, but it is from Shanghai and it does bear a pair of 30¢ 1869s,” Laurence wrote.