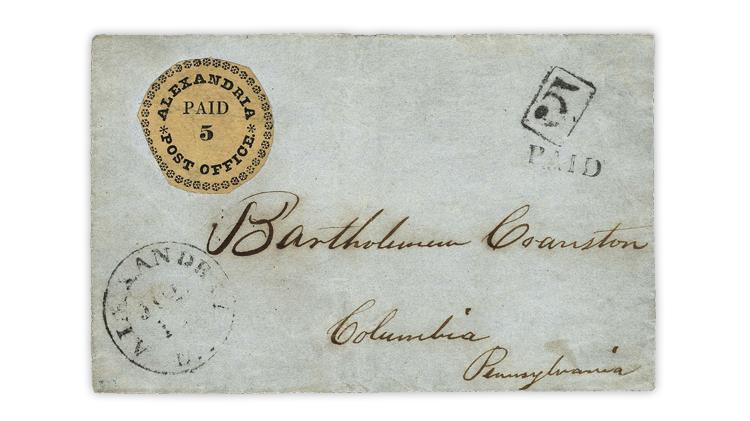 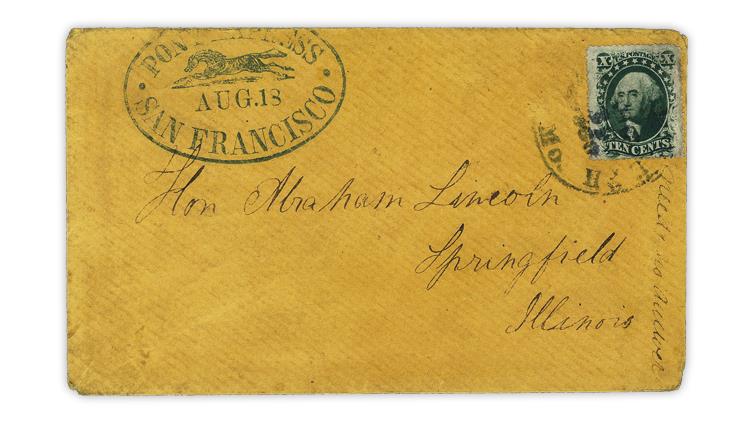 This 1860 Pony Express cover, the only one known addressed to Abraham Lincoln, will cross the auction block during the Jan. 26 H.R. Harmer sale. The cover is offered with an estimate of $150,000. 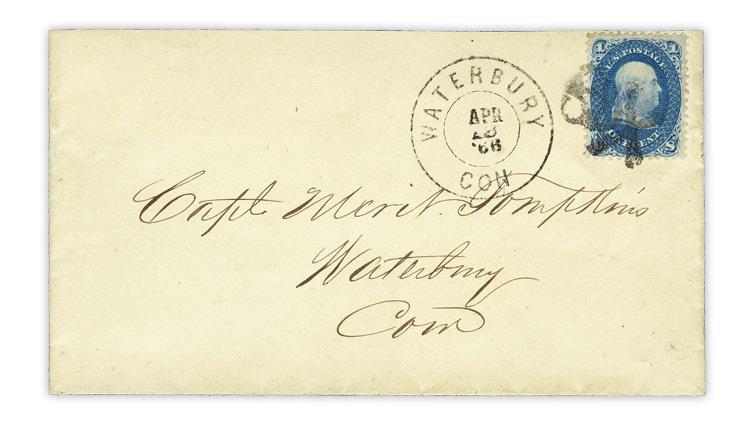 Among the 18 Waterbury fancy cancellation covers in the Jan. 26 H.R. Harmer auction is this 1866 cover mailed locally in Waterbury bearing a crisp strike of the type 1 Skull and Crossbones cancel.
Previous
Next

On Jan. 26 H.R. Harmer will offer the sixth part of the massive Erivan collection of United States and Confederate States postal history.

The auction will take place at 2 p.m. Eastern Time at the firm’s gallery in New York City.

To attend the sale in person, bidders are required to preregister in advance.

“Only bidders who have pre-registered to attend the auction will be admitted to our office for the sale,” H.R. Harmer said in the auction catalog.

“Any attendance is conditional on local and state regulations. Those in the auction room will be sufficiently spaced (minimum of 6 feet apart) and are required to wear masks at all times.”

In a preface to the auction catalog, H.R. Harmer president Charles Epting provided some perspective on the scope of the Erivan collection:

“We’ve now crossed the halfway mark with the planned ‘Erivan’ sales in the United States, although when considering the amount of material still in the collection it sometimes seems as if we haven’t made a dent. Although many iconic items (such as the Pleasant Shade pair, the Pony Express to Abraham Lincoln, and the green New Orleans City Despatch Post in this current catalogue) have come to market, more gems remain for the coming years.”

Epting said that parts 7 and 8 of the Erivan U.S. and Confederate States collection will be offered in separate auctions later this year.

Leading off the Jan. 26 sale is the iconic cover front bearing the discovery example of the 1846 Alexandria, Va., 5¢ black postmaster’s provisional type 1 stamp on buff paper (Scott 1X1) and addressed to Columbia, Pa.

H.R. Harmer notes that the stamp is “cut to shape as always with margin slightly in at left.”

The stamp also has a trivial crease at right and has been lifted from the cover front and repositioned, according to H.R. Harmer.

This important piece of early U.S. postal history is “one of the most historically significant United States covers, in addition to being a showpiece in every regard,” H.R. Harmer said. Its provenance includes the collections of John K. Tiffany, Dudley L. Pickman, Warren H. Colson, Emory Coolidge and the Weill brothers.

The Alexandria, Va., postmaster’s provisional is valued on cover at $500,000 in the Scott Specialized Catalogue of United States Stamps and Covers. The value is italicized to indicate an item that can be difficult to value accurately because of limited market data.

Another historically significant U.S. cover to come up for bids is an 1860 Pony Express cover addressed to Abraham Lincoln in Springfield, Ill., when he was a candidate for president.

A carmine Pony Express dated handstamp on the back of the cover (not shown) indicates the cover arrived Aug. 30 in St. Joseph. The cover is one of 10 known bearing this scarce marking, according to H.R. Harmer.

“This cover … was carried via Pony Express to Abraham Lincoln from an unknown sender in between the contentious convention of May 1860 and the general election in November. … The fact that the only Pony Express cover addressed to Abraham Lincoln also bears one of the service’s rarest markings (the carmine Running Pony) only enhances the appeal of this spectacular item,” H.R. Harmer said.

Also included in the sale is a handsome selection of 18 covers bearing fancy cancellations from Waterbury, Conn.

A cover mailed locally in Waterbury on April 13, 1866, bears a clear strike of the type 1 Skull and Crossbones cancel that ties the 1861 1¢ blue Benjamin Franklin (Scott 63) at left and bottom. The stamp paid the 1¢ drop letter rate.

H.R. Harmer describes the cover as being extremely fine and attractive and notes that the Waterbury Skull and Crossbones cancel was in use for just two days, April 13-14, 1866. About 11 examples of this cancel are known to exist.

H.R. Harmer is offering this Waterbury Skull and Crossbones fancy cancel cover with an estimate of $2,000. The cover last sold for $17,600 in Robert A. Siegel Auction Galleries’ 1980 Rarities of the World sale.

A catalog for the sale of part 6 of the Erivan collection is posted on the H.R. Harmer website. The catalog is downloadable, and online bidding options are available.