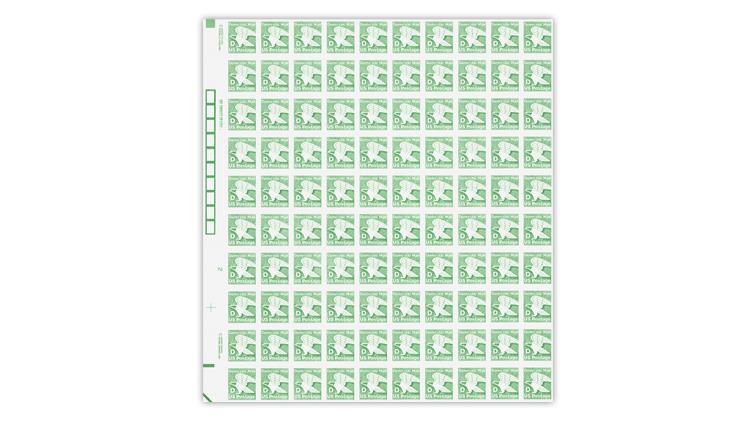 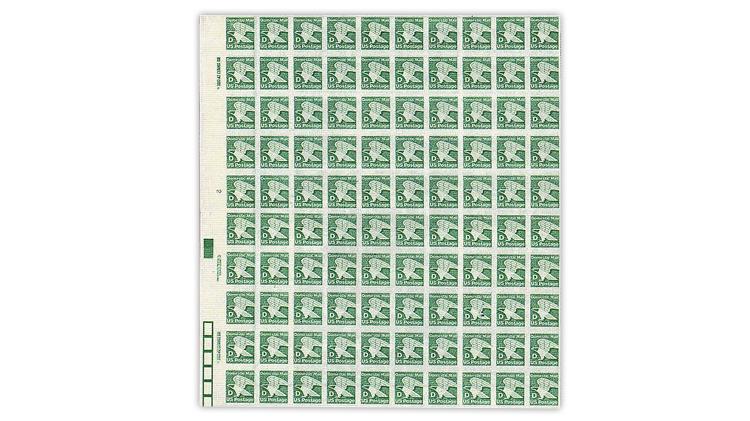 Figure 2. This pane of nondenominated D definitive stamps from a September 2021 Kelleher auction is almost a match for the pane in Figure 1. The difference is the location of the marginal markings, which indicates that the two panes are from different locations on the web.
Previous
Next

I had the opportunity to examine the pane. At first, I thought there could be no doubt it was a counterfeit, but one that is very well done.

However, I found that the auction catalog description was wrong on three counts. First, the stamps are tagged. Second, this is not what the Scott Specialized Catalogue of United States Stamps and Covers lists as 2111(CF2) (another imperf counterfeit), nor is it 2111(CF1), which is the same counterfeit perforated. And finally, it turned out that it was not a counterfeit at all, but that took a while to determine.

Curiously, Kelleher offered a companion pane in an earlier auction held Sept. 14-17, 2021. In the auction catalog, this pane was described the same way as the pane in the October sale, but was offered with a lower estimate. I missed it at the time, but it sold for $1,700 plus the 20 percent buyer’s premium.

As you can see in Figure 2, the marginal markings are located differently on this pane than on the pane in Figure 1. That provides a clue that these stamps are not counterfeits because counterfeits by the nature of their production would be identical from pane to pane.

To read the rest of John Hotchner’s report about these unusual D definitive stamps, subscribe to Linn’s Stamp News.