Pathos and drama in Hardships of Emigration U.S. stamp design 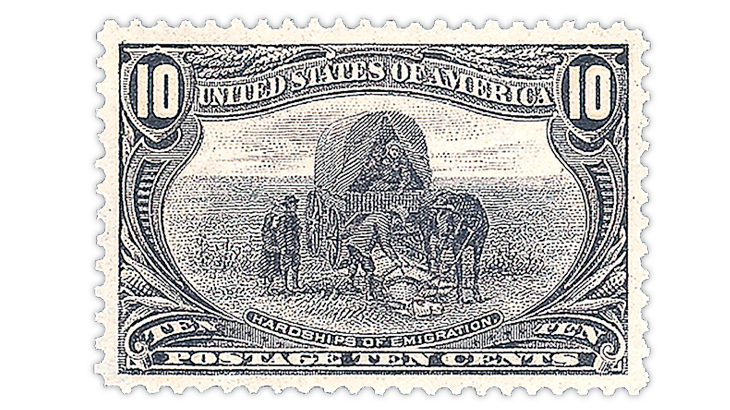 Look for the United States 10¢ Hardships of Emigration stamp from the 1898 Trans-Mississippi set of nine.

The Trans-Mississippi and International Exposition was held from June 1 to Nov. 1, 1898, in Omaha, Neb. The intent of this world’s fair was to publicize the western United States from the Mississippi River to the Pacific Coast. President William McKinley was one of the more than 2.6 million people who attended.

The $1 black Cattle in Storm stamp (Scott 292) from the set is often heralded as the most beautiful U.S. stamp, but all stamps in the issue are eye-catching and valuable.

Look for the 10¢ gray violet Hardships of Emigration stamp (Scott 290). The design shows a family with a covered wagon on the open prairie.

If they were ever part of a wagon train, they would have fallen out and fallen behind. One horse lies dead or dying in the traces with the father bending over it, to either loosen the harness or administer the coup de grace.

A young boy and girl stand forlornly to the left of the father. A mother with a babe in arms and an older daughter peer out uncertainly from under the wagon’s cover. That’s a lot of pathos and drama in a stamp design.

The Scott Specialized Catalogue of United States Stamps and Covers values the stamp at $140 in unused, original gum condition and $425 in mint, never-hinged condition. A used example is valued at $35.

The stamp is a good buy in very fine grade and all three conditions at 80 percent to 90 percent of Scott catalog value.