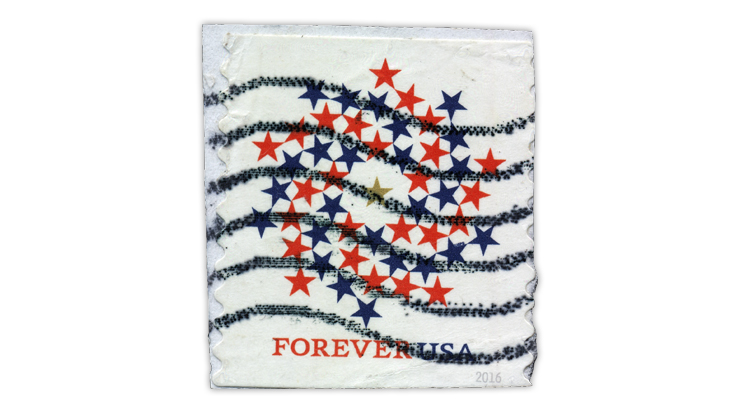 This used Patriotic Spiral coil forever stamp on an envelope piece has been certified by the Philatelic Foundation as genuine with tagging omitted. In its next edition, the Scott catalog will list the discovery stamp as an error.

It is the first report of an error on the Patriotic Spiral issue.

The coil stamp is cut from the envelope it once franked and is still on piece. The face of the stamp shows the six wavy lines of a U.S. machine cancel.

The stamp was found by collector and researcher Robert E. Thompson among stamps he received from Bob Murrin, a stamp dealer based in St. Petersburg, Fla.

United States stamps fulfilling postcard and letter rates and higher denominations are processed with a luminescent tagging that is invisible to the naked eye.

The tagging material emits a glow when it is exposed to shortwave ultraviolet light. As letter mail is processed, the tagging is detected by high-speed mail sorting machinery, which can then properly face the mail and apply the postmark where the stamp is affixed.

Just as when a color is unintentionally omitted from a printed stamp, a stamp with tagging omitted is identified as an error by the Scott Specialized Catalogue of United States Stamps and Covers.

Jay Bigalke, the Scott catalog editor-in-chief, confirmed that Thompson’s discovery of the Patriotic Spiral coil with tagging omitted will be listed as a variety in the 2021 Scott U.S. Specialized catalog.

Thompson has found other production errors in recent years, including a 1983 20¢ Great Seal Official Mail coil stamp with tagging omitted that he discovered in 2016 (Scott O135b). Linn’s Stamp News reported that error discovery on page 1 of the Jan. 30, 2017, issue.

Both versions of the stamp were printed and processed by Ashton Potter USA Ltd., one of two primary contractors printing stamps for the U.S. Postal Service.