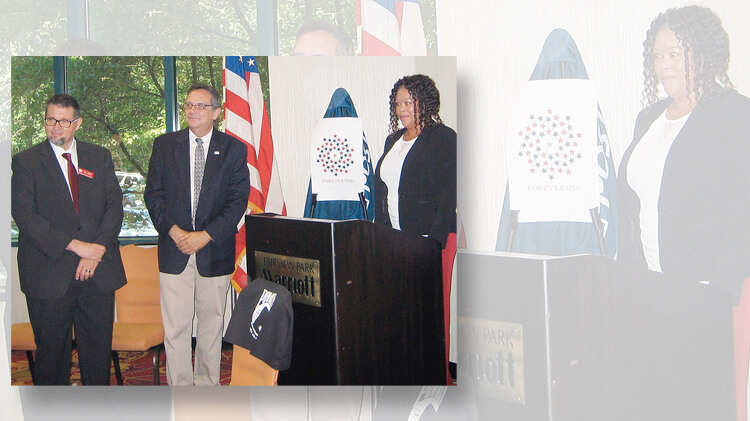 The American First Day Cover Society hosted a first-day ceremony for the Patriotic Spiral forever stamps Aug. 19 at its 2016 Americover show in Falls Church, Va. Among those participating in the event were (left to right): Scott English, executive director of the American Philatelic Society; Chris Lazaroff, chairman of the Americover show; and Terri Davenport, postmaster of Falls Church.

The American First Day Cover Society wasn’t supposed to have a first-day ceremony to open its 2016 Americover show in Falls Church, Va., Aug. 19.

But when the United States Postal Service announced Aug. 3 that it was going to issue a 10-stamp booklet and a coil of 10,000 of its new Patriotic Spiral forever stamp in the Washington suburb that day, Chris Lazaroff, chairman of the show, moved into action.

He promised Mary Ann Penner, executive director of the Postal Service’s stamp services office, that the folks who collect first-day covers would gladly host the first-day event at no expense or involvement by postal headquarters officials.

It would, he said, print the first-day program, find a color guard to present the flag, and even find someone to sing the National Anthem, the staples of every first-day event.

True to his word, Lazaroff pulled off the event, even staging it before an audience of more than 100 without a microphone.

Lazaroff hopes his society’s event will serve as a model for other stamp shows and events.

With the USPS tightening down its expenses and reducing the number of headquarters-run first-day events, Lazaroff is hoping that the USPS will allow more stamp groups to sponsor the increasing number of stamps being released without a formal ceremony.

Part of the attraction of such events has been their patriotic nature and their often homespun charm.

A color guard from the Falls Church American Legion Post 130 and a T-shirted singer for the National Anthem certainly had a small-town charm.

Lazaroff opened the ceremony, thanking the Postal Service “for the stamp” and praising the design of 50 spiraling red and blue stars around a single gold star by Antonio Alcala from nearby Alexandria.

The stamps offer “a lot of potential” for cachetmakers to come up with clever designs, he said.

He already had a fistful of cachets he said AFDCS members had produced in the two weeks since he got the Postal Service to allow the show to host a first-day event.

Falls Church Postmaster Terri Davenport, who brought a sales clerk and some recent commemoratives to the show, acknowledged it was her first first-day event.

“This is another duty” she said she was discovering she had inherited as a new postmaster.

Donald Sundman, president of Mystic Stamp Co., was on hand to talk about the evolution of his company and its involvement in first day covers.

He called the recent decision of Washington Press to cease production of ArtCraft covers “a total surprise.”

Sundman also expressed hope the USPS will resume sales of imperforate press sheets of commemoratives, citing a strong interest in such stamps by collectors.