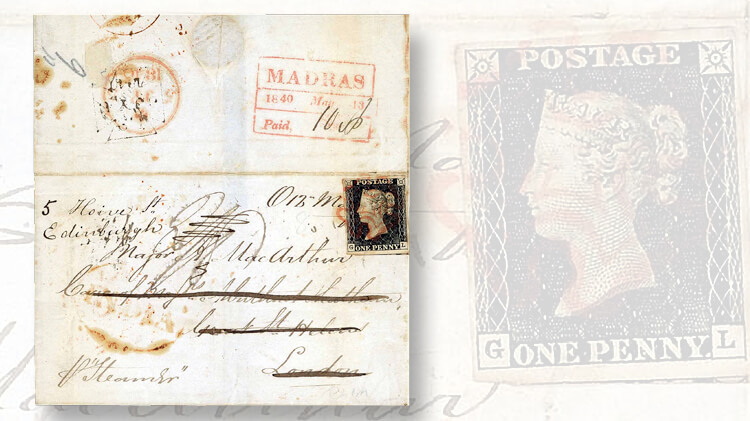 One of just three known covers from India bearing a Penny Black, sent from Madras to Scotland, was sold by Cavendish Philatelic Auctions in London in September for $9,300.

Cavendish Philatelic Auctions held a sale Sept. 7-8 in London featuring what is thought to be one of just three known covers from India bearing a Penny Black, the world’s first postage stamp.

The originally stampless envelope was mailed on May 13, 1840, from Madras, with markings showing that its sender paid 2sh 8d for it to go by steamer to London. On arrival, in early July, the letter was forwarded to Scotland, with the person forwarding it adding a fine, four-margin 1d black from plate Ia. A July 8 Edinburgh receiving handstamp documents the letter’s arrival.

“We have only recorded two other India covers” forwarded with a Penny Black, noted the auction house in the sale catalog, adding that this one was “recently discovered by a Cavendish describer in an old-time stamp collection.”

Estimated at £2,000, it realized three times that amount, selling for the equivalent of $9,300 with the 20 percent buyer’s premium added by Cavendish.