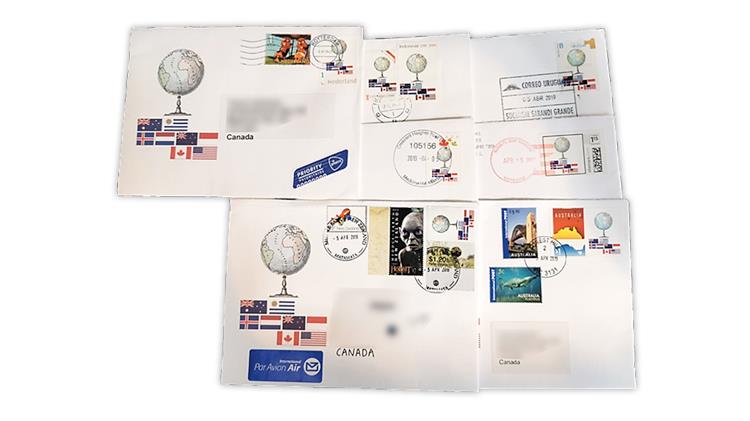 Trevor Ashman coordinated with collectors around the world to create personalized stamps from their respective countries, all with a similar design. 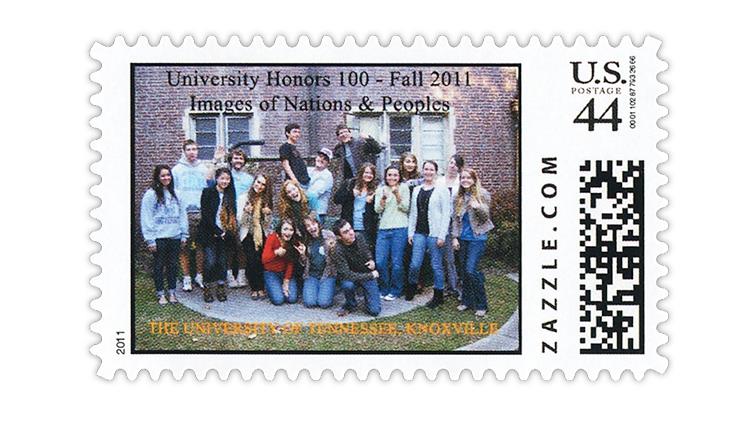 Tom Broadhead shared this Zazzle personalized stamp that he created with his students at the University of Tennessee in Knoxville. 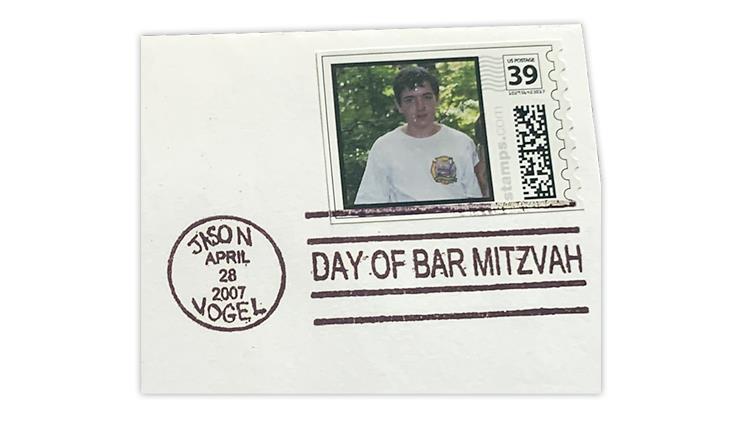 Jeff and Kim Vogel made a “Day of Bar Mitzvah” cover with a faux cancel for their son.
Previous
Next

I received a great response, and I would like to share a few of the stories here.

Trevor Ashman reported on an international project involving people in eight countries. Using the same basic design, each person made a personalized stamp from his or her country and mailed them to each other, largely on the same day. Pictured nearby are cropped images of these covers from the Netherlands, Indonesia, Uruguay, Canada, the United States, New Zealand and Australia. Ashman said there was a slight issue with the cover from Iceland, which is why it isn’t pictured.

Bill Tiffany shared examples of a few parcels that were franked with personalized postage. Some of the personalized stamps were Christmas gifts from family members. He said, “As a stamp collector, they know what to get me each year.”

In a similar vein, Greg Cain told how his colleagues created personalized stamps as a gift for him upon retirement.

Ray Cartier recounted how he created some personalized stamps featuring the B-32 bomber aircraft to use on covers marking different anniversaries related to that aircraft.

Tom Broadhead shared this Zazzle personalized stamp story: “Over the last 10 years, I have occasionally taught a seminar course for freshman honors students at the University of Tennessee, Knoxville. The course emphasized the cultural, historical, and economic relevance of stamps, and each student selected a country to focus on two papers and presentations. In 2011 the course was titled Images of Nations and Peoples, and I took a class picture after our final class meeting and sent it to Zazzle to create photo stamps. Each student was mailed two copies with a holiday greeting after fall exams.”

Avid personalized postage collector Otto Bergman created a postcard design marking the end of the program that used some of the stamps he had created throughout the years.

And lastly, Jeff and Kim Vogel described how they created a “Day of Bar Mitzvah” cover for their son Jason.

“His stamp collector parents thought it would be fun to use a photo stamp with his picture for his invitations and reply cards,” they said. “We came up with the idea to have a philatelic favor for his friends. We had a rubber stamp store come up with the ‘cancel’ and created 15-20 of these covers.”

Thanks to all the readers who shared their fond memories of personalized postage.

Will the U.S. personalized stamp program ever return? Who knows, but it seems doubtful in the near future.