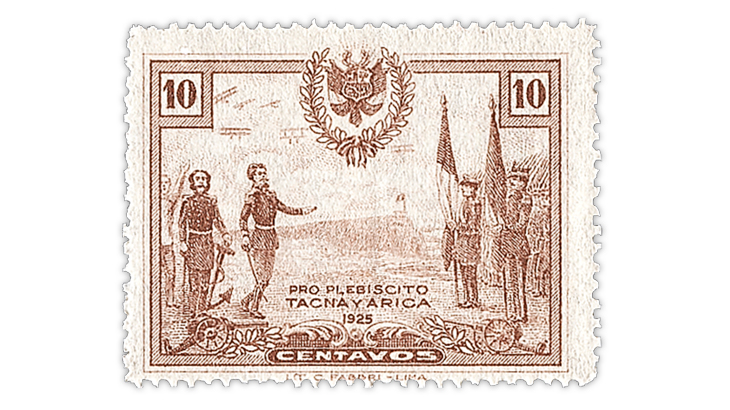 The Peru 1925 10-centavo and 50c Tacna and Arica plebiscite postal tax stamps (Scott RA4-RA5) are infrequently offered and usually sell for a good deal more than their Scott catalog values.

Catalog values for some older Latin American stamp issues often remain static over long periods because the stamps are seldom advertised or offered for sale in the United States. When they do sell, it is often for a good deal more than Scott catalog values.

In the War of the Pacific (1879-83), Chile defeated the allied nations of Peru and Bolivia on land and at sea.

The war was disastrous for Peru, especially with Chile occupying the formerly Peruvian provinces of Tarapaca, Tacna and Arica.

The Treaty of Ancon in 1883 halted the hostilities, awarded Tarapaca to Chile and left the final disposition of Tacna and Arica up to a plebiscite originally scheduled to be held later that year. However, the two nations could not agree on the terms of the plebiscite, so it was not held. Chile continued to occupy both provinces.

Peru broke off diplomatic relations over the occupied provinces in 1911, raising the specter of renewed warfare. In 1922, both countries agreed to submit the question to the president of the United States for arbitration.

This eventually resulted in the Treaty of Lima in 1929, which returned Tacna to Peru and gave Arica to Chile.

Another plebiscite was proposed in 1925, but again it was never held. However, Peru issued four sets of postal tax stamps between 1925 and 1928 to defray the costs of the proposed plebiscite.

The designs of the first set of postal tax stamps (Scott RA1-RA5) issued in 1925-26 show Morro de Arica (a hill overlooking the port of Arica), Peruvian heroes of the war Admiral Grau and Colonel Bolognesi, and the Bolognesi Monument in Bolognesi Plaza, Lima, Peru.

Short sets of the three 5-centavo stamps (Scott RA1-RA3) are fairly common and can be found at or below their low Scott catalog values.

The stamp that started it all