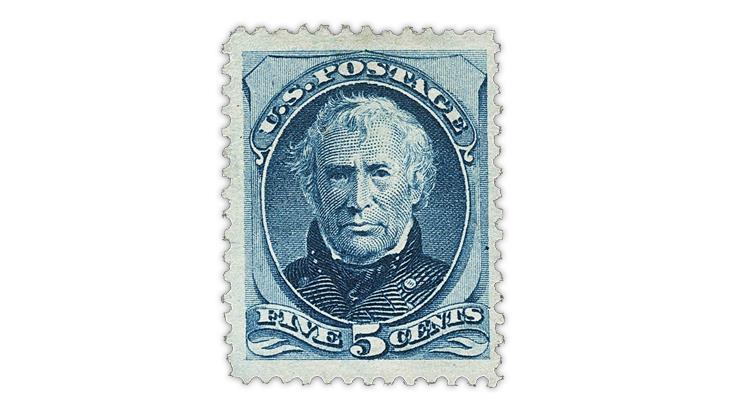 One of the 10 recorded examples of the 1875 Continental Bank Note Co. special printing of the 5¢ bright blue Zachary Taylor stamp will be up for bids during Robert A. Siegel Auction Galleries’ April 29-30 sale of the Gary Peterson collection of important 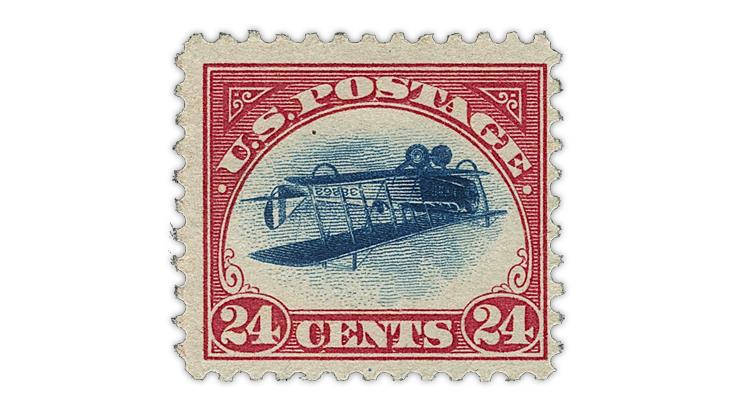 Among the standout rarities in the Siegel auction of the Petersen collection is this 1918 24¢ Jenny Invert airmail error stamp from position 36 in the original pane of 100 that was purchased May 14, 1918, at a Washington, D.C., post office.
Previous
Next

The stellar three-generation collection of rare classic-era United States stamps formed by businessman Gary Petersen, his father and grandfather will be offered April 29-30 by Robert A. Siegel Auction Galleries in New York City.

Two sessions will be held each day of the sale, beginning at 10:30 a.m. and 1 p.m. Eastern Time. An 18 percent buyer’s premium will be added to winning bids.

Among the 549 lots to be offered are some of the rarest U.S. stamps in existence. In the introduction in the Siegel catalog for the sale, Charles W. Deaton provides a succinct review of Petersen’s journey as a collector. He also provides a helpful perspective on the scarcity of many of the stamps in the collection:

“There are 69 stamps in this collection of which fewer than 100 copies are known. There are 20 stamps of which a dozen or fewer copies are known. There are five stamps of which five or fewer copies are known, including the 3¢ B Grill (Scott 82), and the dollar-value State Department and Newspaper Special Printings. All of the major errors and inverted center stamps are here, including the three 1869 Pictorial Inverts, the 1901 Pan-American Inverts in singles and fabulous blocks of four of the 1¢ and 4¢, and the famous 1918 24¢ Inverted Jenny.”

Opening the sale are 14 lots of postmasters’ provisional stamps, including a handsome used example of the 1846 Millbury, Mass., 5¢ black on bluish paper (Scott 7X1). Only 18 examples of the Millbury postmaster’s provisional are recorded, according to Siegel.

A 1976 Philatelic Foundation certificate accompanies this stamp, which Siegel lists at the Scott Specialized Catalogue of United States Stamps and Covers value of $50,000.

One of the 10 recorded examples of the 1875 Continental Bank Note Co. special printing of the 5¢ bright blue Zachary Taylor (Scott 181) will be up for bids during the Petersen sale. Just nine of these stamps are available to collectors because one resides in the Miller collection owned by the New York Public Library.

The 1875 5¢ Taylor special printing, without gum as issued, on offer is described by Siegel as having “deep rich color on fresh bright paper” and complete intact perforations on all four sides.

In the lot description, Siegel states that there only four “sound and well-centered examples available to collectors,” including the stamp in the Petersen collection, which represents “a significant opportunity to add one of the rarest stamps in U.S. philately without compromising on condition.”

Among the 20th-century rarities to cross the auction block is a 1923 1¢ Benjamin Franklin printed from rotary press sheet waste (Scott 596), of which just 15 (all used) are recorded.

Ten of the 15 known examples, including the one in the Petersen sale, bear a “KANSAS CITY MO.” Bureau precancel. Overall, only one postally used and three precanceled examples are sound, according to Siegel.

Siegel cites the Scott U.S. Specialized catalog value of $200,000 for a Bureau precanceled example of Scott 596 in its description of this 1¢ Benjamin Franklin rotary press sheet waste stamp.

The 1918 24¢ Jenny Invert airmail error stamp (Scott C3a) in the Petersen collection is from position 36 (the sixth stamp in the fourth row) in the original pane of 100 that was purchased May 14, 1918, at a post office in Washington, D.C., by William T. Robey.

In the description of this Jenny Invert, Siegel notes that the stamp has original gum and a “single light hinge mark.” Siegel also draws attention to the exceptional freshness of the stamp’s paper and points out that Sidney A. Hessel “might have been the first person to acquire this position when the sheet was broken up by Eugene Klein in 1918.”

Petersen paid $388,125 (including the 15 percent buyer’s premium) for his example of this invert rarity during Siegel’s 2008 sale of the Perry Hansen collection of U.S. stamps and covers.

This Jenny Invert is accompanied by certificates of authenticity issued by the Philatelic Foundation in 1978, 1996, 2008 and 2016. The stamp has an impressive provenance, having graced the collections of Col. Edward H.R. Green, Hessel, Kenneth Wenger, “Windsor” and Hansen.

Siegel lists the stamp at the Scott U.S. Specialized catalog value of $450,000, which is for an unused example of Scott C3a in very fine condition.

Closing out the auction are a dozen lots of collection balances. One of these is a selection of early commemorative issues that includes unused 1893 Columbian, 1898 Trans-Mississippi and 1901 Pan-American Exposition stamps. Siegel notes that some of the stamps have small faults and disturbed gum.

Siegel is offering this commemorative collection balance with an estimate of $2,000 to $3,000. The total Scott catalog value exceeds $7,500, according to Siegel.

A single catalog has been prepared for the Petersen collection sale. Full details of the auction, including a downloadable version of the catalog and online bidding options, are available on the Siegel website.