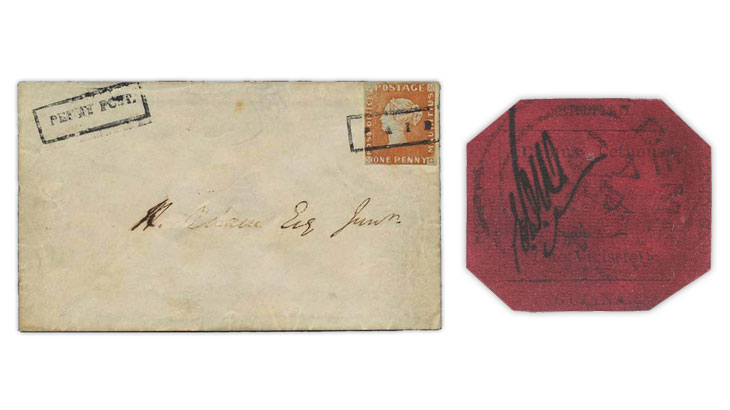 This Mauritius Ball cover and the unique British Guiana 1856 1¢ Magenta were among the three philatelic rarities that sold in June for a combined total of approximately $25 million.

Some of the world’s biggest rarities hit the auction block in June. One exceeded expectations, setting a world record for the amount paid for a philatelic object.

The only example of the Mauritius Ball cover in private hands was sold for just shy of $12 million in late June in an auction conducted by the German firm Christoph Gaertner. Matthew Healey’s report on the sale appears on page 10 of this issue.

One of the highlights of my philatelic career was seeing this cover, along with the other two Mauritius Ball covers, during a trip to London a couple of years ago.

The Mauritius Ball cover news story follows on the heels of Sotheby’s June 8 sale of the unique British Guiana 1856 1¢ Magenta and the United States 1918 Jenny Invert plate block of four for $8.3 million and $4.87 million, respectively.

The 1¢ Magenta continues to make headlines. Stanley Gibbons announced on the day of the sale that it was the high bidder.

In late June, Gibbons chief executive officer Graham Shircore sent an email to those interested about how it intends to “make ownership of this historic item available for all.”

Shircore said that Gibbons was in the process of finalizing shipping and payment of the stamp and that it had “begun commissioning the display at 399 Strand,” the firm’s address in London, England.

“We have seen a huge level of interest in the concept of fractional ownership and will be sharing more about what this will look like in the coming weeks,” he said. Gibbons also plans to post details on the website it created for the stamp.

The Gibbons’ email included a link to a survey that asked the following questions:

2. What additional benefits of ownership would be most important to you?

3. Do you think that only those purchasing part of the stamp should be able to view it free of charge?

4. What most interests you about the chance to own part of the world’s most expensive stamp?

5. How important would it be to you that you’d be able to sell your stake in the stamp quickly?

6. Does the idea of building a collection of pieces of unique, valuable treasures interest you?

7. What is your view of the use of blockchain technology as part of the digital offering?

Those seven questions start to paint a picture as to what might be Gibbons’ plan for the stamp. It will be interesting to see how this stamp continues to make headlines. I’m certain it will.