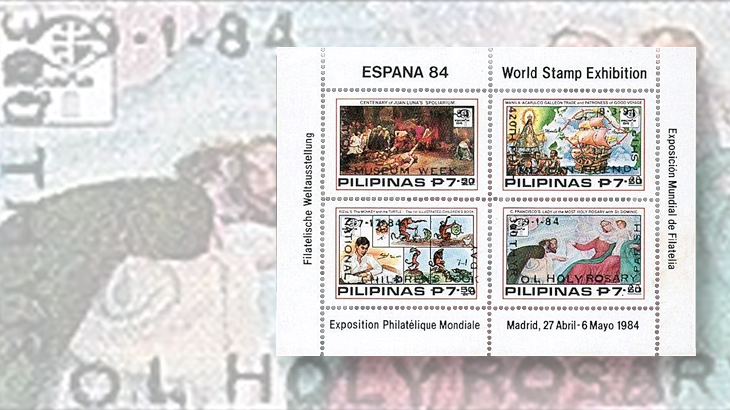 The Philippines Espana 84 souvenir sheets overprinted in black and red (Scott 1690A-1690B) are in demand and a good buy at the 2016 Scott Standard Postage Stamp Catalogue value of $100 each in both mint never-hinged condition and used condition.

The Republic of the Philippines, an archipelago of more than 7,000 islands in the Western Pacific Ocean, has enjoyed a long and close relationship with the United States since it was acquired as a territory as a result of the Spanish-American War in 1898.

Plans for Philippine independence were interrupted by Japanese invasion and conquest in 1942. Americans and Filipinos fought side-by-side to drive out the Japanese.

Stamps of the Philippines are popular with many American collectors, particularly with those who have served, worked or lived there.

On April 27, 1984, the Philippines issued a set of two stamps and a souvenir sheet of four (Scott 1688-1690) commemorating the Espana 84 international stamp exhibition in Madrid. The souvenir sheet contains four 7.50-peso stamps and was issued perforated gauge 14½ by 15 and imperforate.

The 2016 Scott Standard Postage Stamp Catalogue values the intact souvenir sheets in both mint never-hinged condition and used condition at $100 each. There is good demand for these souvenir sheets, and they are a good buy at the Scott catalog value.