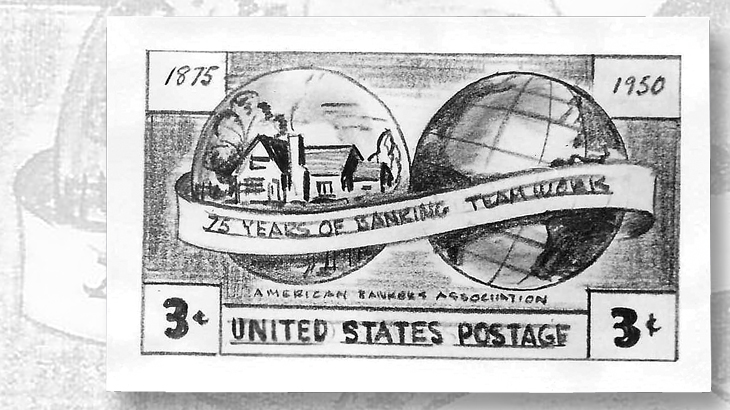 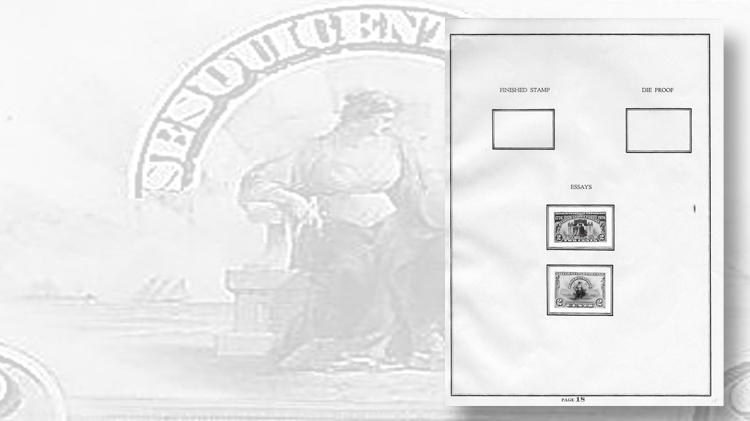 Shown on this page from the Hall collection are incomplete and rejected designs for the 2¢ Sesquicentennial Exposition stamp. 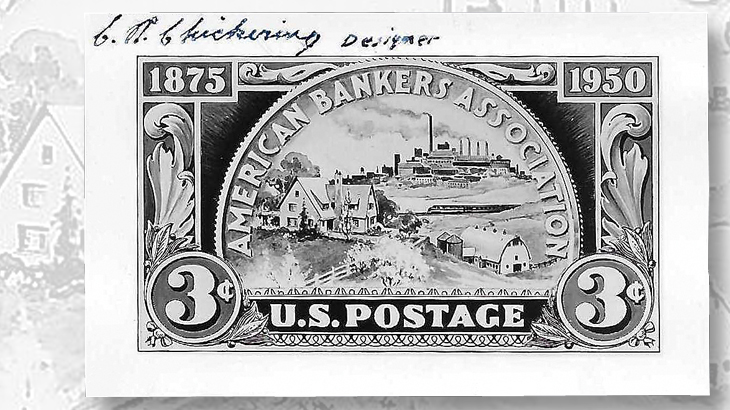 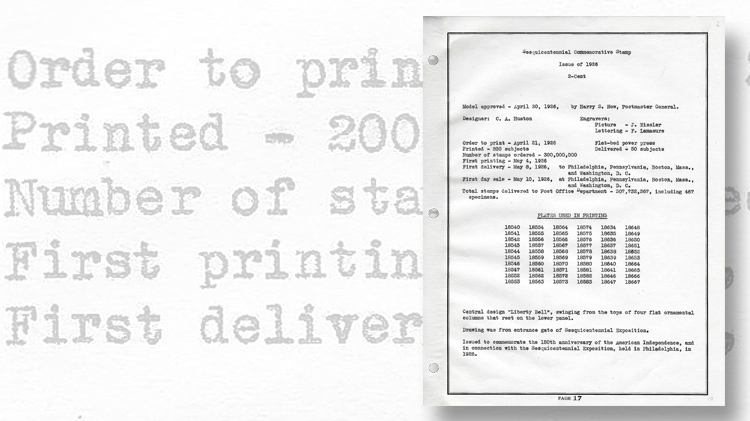 In May 2107, Harmers International sold the Alvin Hall collection of U.S. photo essays and small die proofs. Hall served as director of the Bureau of Engraving and Printing for 30 years. Shown is his specification page for the 1926 2¢ Sesquicentennial Exp 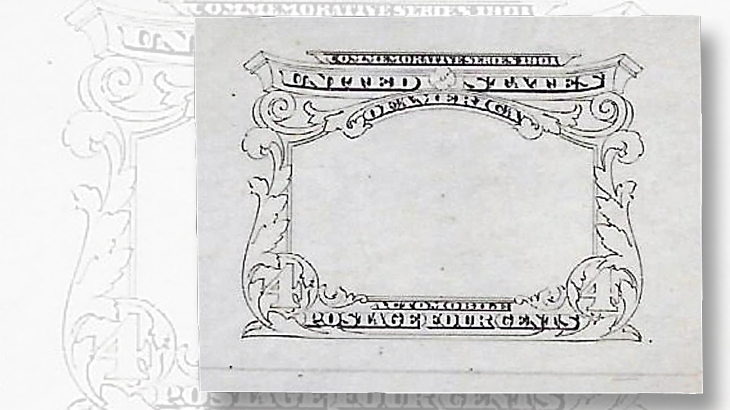 A reduced ink drawing by R. Ostrander Smith of the frame for the 1901 4¢ Pan American commemorative stamp.
Previous
Next

Alvin Hall, at the age of 36, was appointed director of the Bureau of Engraving and Printing by President Calvin Coolidge in 1924. Hall was the youngest person to ever serve as director.

He retired after 30 years as director, in 1954, which also made him the longest-serving director as well. His son Alvin Jr. was one of the two models for the United States 1932 2¢ Arbor Day stamp (Scott 717).

Upon Hall’s death at age 80, in 1969, his three-volume collection of photo essays and small die proofs passed to his son, who consigned it in the May 2017 Harmers International auction sale in New York City.

This sale was a unique piece of philatelic history and brought prices that were unheard of for photo essays. (The same could be said for the small die proofs as well.)

Each Scott number, from the Jamestown issue of 1907 (Scott 328-330) through some of the commemoratives of 1946, had its own typed page of printing specifications, followed by a prepared page for the stamp, small die proof, and photos of rejected essays. Each page was numbered at the bottom.

The first two illustrations comprise a set of pages from the Hall collection. The first consists of the pertinent production, printing, and issuing specifications for the 1926 2¢ Sesquicentennial Exposition commemorative stamp (Scott 627).

The second page contains stamp-size photographs of the accepted and rejected designs. There also was a space on the page for an example of the finished stamp and small die proof. The small die proof had been sold in a Harmers sale probably 20 or more years ago.

A photo essay is a photographic reduction of a model, rejected design, incomplete design, or finished engraved proof printed on glossy photographic paper. They are typically produced in a 2:1 ratio of the actual image.

They were produced at the Bureau of Engraving and Printing starting with the 1901 Pan-American issue (Scott 294-299) and running well into the 1950s.

Photo essays should not be confused with the publicity photos of actual postage stamps that were released by the U.S. Post Office Department. Their purpose was to publicize forthcoming new stamp issues.

The genesis for a postage stamp usually starts with a sketch or wash-and-ink drawing of a proposed design. This is usually done on a piece of white Bristol board with the image approximately 6 inches by 9 inches in size.

The photographic reduction shown in the third picture, a rejected sketch for the 1950 3¢ American Bankers Association stamp (Scott 987), is 1¾ inches by 3¼ inches and was prepared to see how the proposed stamp image would look closer to stamp size.

The fourth illustration shows the approved design for the 3¢ American Bankers Association stamp. The entire design was executed using pen and ink, with all of the gray tones represented by “wash.”

This is a photographic reduction (1 10/16 inches by 2 13/16 inches) of the actual approved original wash drawing by Bureau of Engraving and Printing designer Charles R. Chickering. This particular example is signed in ink in the top-left margin.

During Checkering’s career at the Bureau, he was responsible for designing more than 150 postage stamps, including the entire 1954-73 Liberty series (Scott 1030-1059A).

Both the frame and vignette engraver would work with both the original approved artwork and the photographic reduction when executing the steel die, which is the next step in the stamp production process.

The different-sized images would aid the engravers with the space relationships of the design elements when taking the engraving down to actual stamp size.

Smith executed many different frame designs on white Bristol board (approximately 6½ inches by 5 inches in size), both in pencil and in ink.

Once a frame design had been approved in this format, a photographic, stamp-size reduction was made. This was done to aid the frame engraver who had to reduce this complex, large piece of art to the size of a postage stamp.

Only a handful of photo essays from the early Bureau-produced stamps have made their way into the Scott Specialized Catalogue of United States Stamps and Covers. This is because only a small amount of this type of material has made it into the hands of collectors.

In the 1920s and beyond, author Max Johl had access to this type of material when he was preparing his four-volume set, The United States Postage Stamps of the 20th Century.

The material used to illustrate Johl’s books came to the market sometime after his death. It is doubtful that photo essays from this period will ever make it into the Scott U.S. Specialized catalog.

However, this does not diminish their importance to collectors and their collections and exhibits. The results of the sale of the Hall collection reinforce the validity of this type of material and the growth of its value.

The topic for my September column is still in the development stage.

If there is a topic in the area of essays and proofs you would like me to write about, please let me know.

James E. Lee has been a full-time professional philatelist for more than 25 years, specializing in United States essays and proofs, postal history and fancy cancels. He may be reached via email at: jim@jameslee.com or through his website.

The affordable ways to collect essays and trial color proofs