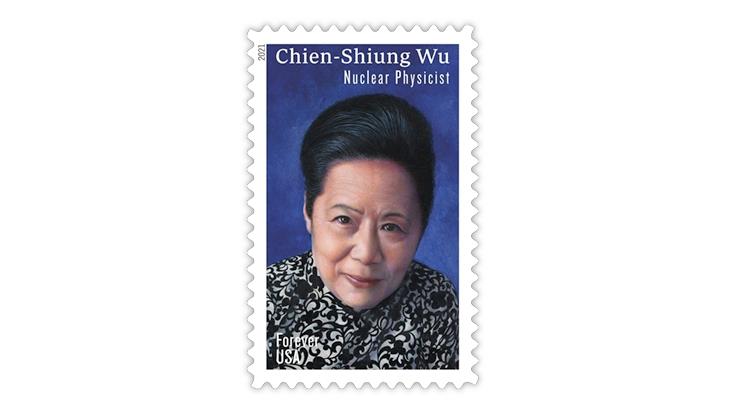 A forever stamp honoring physicist Chien-Shiung Wu will be issued Feb. 11. Wu’s work in nuclear physics has been celebrated for many years and created pathways for scientists who continue work in the field today. 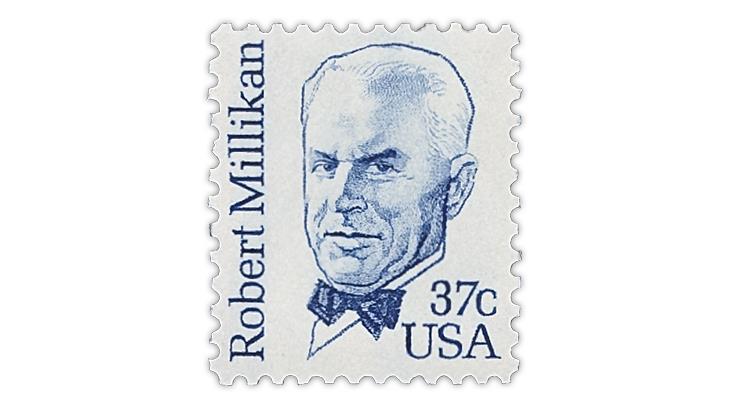 Robert Millikan, the physicist who advised Chien-Shiung Wu when she earned her doctorate in physics, was honored on a stamp in 1982. 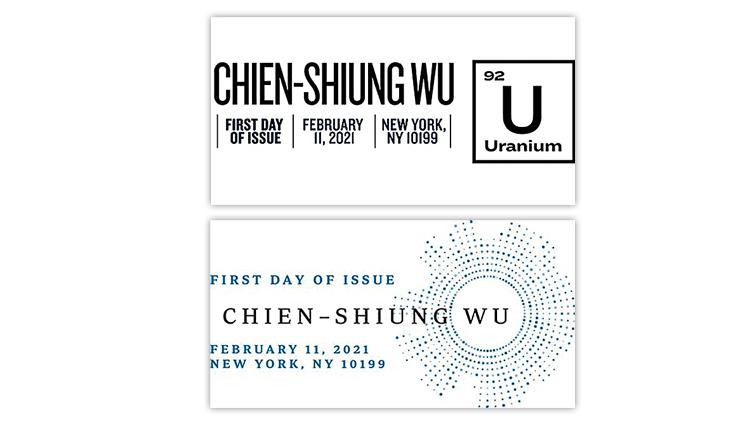 Two first-day cancels created for the Chien-Shiung Wu stamp display her name with symbolic designs. New York, N.Y., is the stamp’s city of issue.
Previous
Next

Chien-Shiung Wu, a prominent Chinese-American physicist whose groundbreaking work in the United States advanced other scientific fields as well, is the subject of a new U.S. forever stamp to be issued Feb. 11.

The nondenominated (55¢) vertical commemorative designed by U.S. Postal Service art director Ethel Kessler features a portrait of Wu painted by Kam Mak, whose previous work for the Postal Service includes the Lunar New Year stamps issued annually in a series from 2008 to 2019.

Mak, born in Hong Kong and now based in Brooklyn, N.Y., first drew his portrait of the physicist in graphite and then rendered it in egg tempera paint, according to the Postal Service.

“The background was painted with the pigment lapis lazuli, an ancient, highly valued color historically used in artistic depictions of angels, nobility, and the Virgin Mary,” the Postal Service said, adding that in the portrait, Wu is shown wearing a black-and-white high-collared traditional Chinese gown known as a qipao.

The name Chien-Shiung Wu is lettered across the top of the stamp in white, with the title “Nuclear Physicist” in slightly smaller white letters below the name.

The Postal Service specifically noted that the spelling of Wu’s name on the stamp reflects how she wrote her name and referred to herself.

“This romanized spelling of her name is based on the Wade-Giles system, which is all but obsolete for Chinese words and names,” according to the Postal Service. “The Pinyin system is now the standard in both China and the United States.”

USPS contract printer Ashton Potter (USA) Ltd., printed the stamps by offset lithography in panes of 20 processed from sheets of 240.

As a youngster, she attended a school that was founded by her father, and in 1934 she graduated from the National Central University in Nanking, China, with a physics degree.

After immigrating to the United States, she earned her doctorate in physics from the University of California-Berkeley in 1940.

She married physicist Luke Chia-Liu Yuan in 1942 at the home of Robert Millikan, who had served as her academic advisor. Forty years later, Millikan would be honored on a 37¢ definitive stamp in the Great Americans series (Scott 1866).

Wu began working at Columbia University in New York City in 1944, where she would become a full professor in 1958.

In an article titled “Dr. Chien-Shiung Wu, The First Lady of Physics,” the U.S. National Park Service wrote that “among her important contributions to physics was the first confirmation of Enrico Fermi’s 1933 theory of beta decay (how radioactive atoms become more stable and less radioactive).”

Wu designed and carried out a beta-decay experiment to test a theory by experimental physicists Tsung-Dao Lee and Chen Ning Yang, at their request. Lee and Yang were awarded a Nobel Prize in physics for their work in 1957, but Wu did not share in the prize.

“Chien-Shiung Wu continued to be a leader in the field of physics, and her work even crossed over to biology and medicine,” according to the National Park Service. “Some of her research included looking at the molecular changes in red blood cells that cause sickle-cell disease.

“Although denied recognition with the Nobel Prize, Dr. Wu received many honors during her career.”

In 1975 she was chosen to become the first woman president of the American Physical Society. That same year she received the National Medal of Science “for her ingenious experiments that led to new and surprising understanding of the decay of the radioactive nucleus.”

After her retirement from Columbia in 1981, Wu was involved in educational programs in the United States and internationally, including supporting the interests of young women in scientific fields.

The stamp honoring Wu is the latest among U.S. stamps paying tribute to individual physicists whose work has been defined as researching the properties of matter and energy.

The Postal Service has prepared two pictorial first-day cancels for the stamp honoring Wu. The black cancel highlights the scientist’s name and includes a block representing the heavy metal uranium from the periodic table of elements.

The color postmark also features her full name, with “WU” in the center of a field of expanding circles of blue dots.

A virtual dedication ceremony for the Chien-Shiung Wu stamp is expected to take place on the Postal Service’s social media sites on Facebook and Twitter on the issue date, but details had not been released as the Feb. 8 issue of Linn’s was going to press.