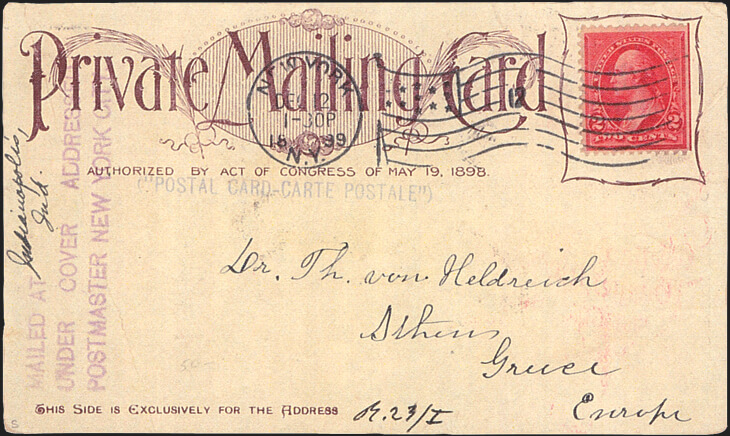 A private mailing card sent from New York City to Athens, Greece, actually began its travels in Indianapolis, Ind., as an unusual marking reading up the left edge of the card explains. 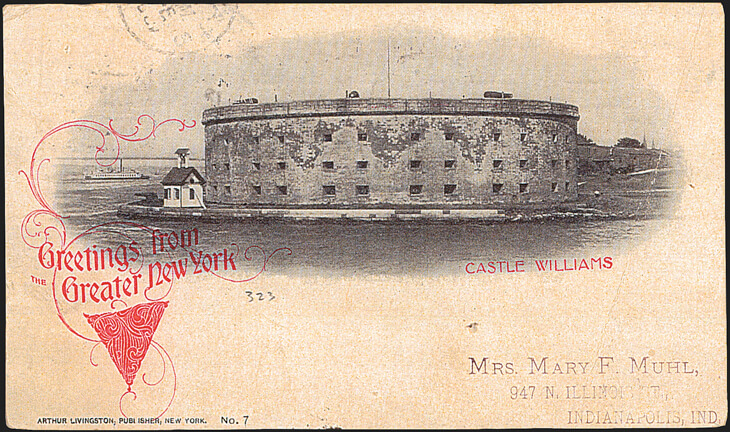 The picture side of the postcard shows a New York City landmark, Castle Williams, which was built by the United States Army Corps of Engineers in 1911, and which today is part of a national park
Previous
Next

By Charles A. Fricke

The 1899 postcard pictured here features the image of a New York City landmark: Castle Williams, which is now part of the Governors Island National Monument.

But this card also includes an unusual postal marking that adds to its historic charm.

Let’s begin with a brief history of the circular fortification illustrated on the back of the card.

Castle Williams was designed by Lt. Col. Jonathan Williams of the United States Army Corps of Engineers. Its construction was completed in 1811, just prior to the War of 1812.

The structure was intended to be a fortification on Governors Island that would serve as part of a defense system for New York Harbor.

It is 210 feet in diameter with a sandstone wall of 7 feet to 8 feet thick, consisting of four levels and 13 casements holding up to 26 cannons.

Although it was never part of an active defensive operation, it did hold Union troops during the Civil War, as well as Confederate prisoners of war and Union deserters.

Later it served as a low-security military prison. Over time it was upgraded with housing improvements until it ceased operations in 1965.

The Coast Guard took control of the island that year and considered demolishing Castle Williams, but the structure was instead converted into a community center. It was added to the National Register of Historic Places in 1972, transferred to the National Park Service in 2003, and opened to the public in 2011 following extensive rehabilitation.

The postcard, therefore, pictures the structure during the period when it was in use as a military prison.

Handstamped below the large printed message “Private Mailing Card” is the message “Postal Card-Carte Postale.” This additional message follows a Universal Postal Union agreement that allowed the card to be mailed at the 2¢ UPU first-class postcard rate.

On the back, or picture side of the postcard is an imprint identifying the card with a “No. 7” as a product of New York publisher Arthur Livingston.

The handstamped return address of Mrs. Mary F. Muhl of Indianapolis, Ind., appears at lower right. Since the card was mailed in New York City without a message, it is likely an exchange postcard.

That means Mrs. Muhl was sending the postcard to a fellow member of her postcard exchange club. Members would receive a postcard from a club member and send another to the mailer in return. Structures and monuments were popular subjects on exchange postcards.

Since there was no written personal message, Mrs. Muhl actually could have mailed the card at the 1¢ UPU printed matter postal rate. As a result, she overpaid the postage by 1¢.

The more unusual marking reads up along the left side of the front of the card: “Mailed at Indianapolis, Ind., under cover addressed to postmaster New York City.” That message is handstamped in uppercase letters, with the exception of “Indianapolis, Ind.,” which is handwritten in a blank space.

It is an unusual printed picture postcard, with an unusual marking added, and addressed to an appealing destination.

It has been preserved for more than a century thanks to the care that Mrs. Muhl put into sending the card, and that Dr. von Heldreich put into saving it in his own collection.