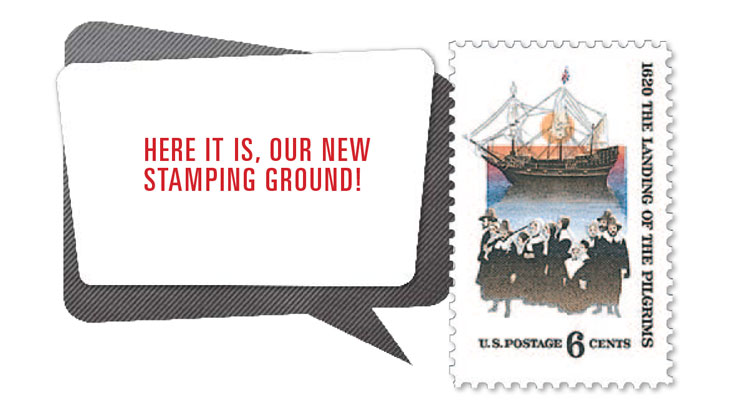 For the June cartoon caption contest featuring the 1970 6¢ stamp honoring the 350th anniversary of the landing of the Mayflower, Marc Chevalier of Tacoma, Wash., gave the arrival at Plymouth Rock a collecting twist. His entry won the best philatelic line.

The 1620 arrival of the Pilgrims at Plymouth Rock is portrayed on the 1970 6¢ stamp celebrating the 350th anniversary of the event (Scott 1420). That commemorative served as the cartoon caption contest stamp for June.

It should be no surprise that the Covid-19 pandemic played prominently in a majority of the entries.

An example is “The sign says everything is cancelled due to illness” by H.J.W. Daugherty of Eastham, Mass.

Merle Farrington of Medway, Mass., took another approach with “They forgot to mark the pathway with six foot spacing.”

Half a dozen entries included some version of an old phrase about spring. The earliest received came from John Brady of Clementon, N.J.: “If April showers bring May flowers, what do Mayflowers bring? Pilgrims.”

Finding a post office was much on the minds of the Pilgrims according to another group of entries.

From these comes this example from Jim Smith of Etowah, N.C.: “What’s the way to the post office? Are you sure this change of address card is all we need to file?”

There was also a group of complaints about the rigors the Pilgrims faced on their voyage to America. From Terry Meier of Tampa, Fla., comes, “Man, the buffet on that cruise ship was awful!”

The apt entry from Marc Chevalier of Tacoma, Wash., won the philatelic part of the contest.

For the nonphilatelic part of the contest, the honors went to Michael Litvak of Pasadena, Calif., for “You see! I told you there really was no wall on this side of the country.”

Who’s up for beach volleyball?” by David Cohen of Rockville, Md.

“There’s a sign that says, ‘Lief Erikson was here’!” sent by Brian Magee of Wethersfield, Conn.

“Which way to Disney World?” from Michael Tremel, of Leland, N.C.

“I wonder if they have enough cornucopias to go around?” by Rosemary Harnly of Red Wing, Minn.

“Do you think $24 worth of beads and trinkets will be enough to keep the postal service afloat?” from Steve Kotler of San Francisco, Calif.

“Forget any freedoms; how is the internet connection?” from Kenneth Bonvallet of Westerville, Ohio.

Thanks and a tip of the hat to all who entered. The next contest will be announced in the Aug. 10 issue of Linn’s.