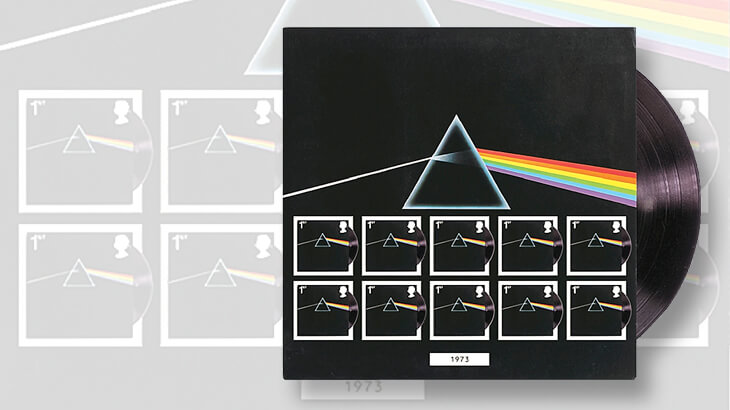 Great Britain’s Pink Floyd stamp showing the album cover art for The Dark Side of the Moon was produced in a special pane of 10 stamps with moisture-activated gum.

Great Britain’s Royal Mail has issued two versions of one of the stamps in its Pink Floyd set.

The former stamps were printed in sheets of 50 (sold in panes of 25 at most postal outlets), and the four stamps are se-tenant (side-by-side) in a souvenir sheet.

The stamp showing the cover of The Dark Side of the Moon, the band’s most commercially successful album and considered one of the greatest rock albums of all time, was produced both as a self-adhesive in sheets of 50  and with moisture-activated gum in a pane of 10.

Royal Mail is calling this pane a “maxi sheet.” It measures 223 millimeters by 188mm, and was produced in a limited quantity of 10,000. The panes are serially numbered.

The nondenominated first-class The Dark Side of the Moon stamp shows the iconic cover for this album with the album sticking out of it. This design is replicated in the selvage above the 10 stamps in the pane. Inscribed below the stamps is “1973,” the year the album was released.

Royal Mail said of The Dark Side of the Moon and the artwork for its cover: “It was recorded at Abbey Studios using some of the most advanced recording techniques of the time, including multitrack recording and tape loops. The album’s iconic sleeve, designed by Storm Thorgerson, depicts a prism dispersing light into colour and represented the band’s stage lighting, the record’s lyrical themes, and keyboardist Richard Wright’s request for a ‘simple and bold’ design.”

“The Dark Side of the Moon topped the Billboard Top LPs & Tapes chart for one week and remained in the charts for 741 weeks from 1973 to 1988. An estimated 50 million copies were sold … “

Royal Mail’s other products for the Pink Floyd set include first-day covers, a presentation pack with mint examples of the stamps and a timeline of the band’s career, and 11 postcards reproducing the designs of the 10 stamps and the souvenir sheet.

International Security Printers printed the self-adhesive stamps showing album cover art by gravure, and the four stamps in the souvenir sheet by lithography.