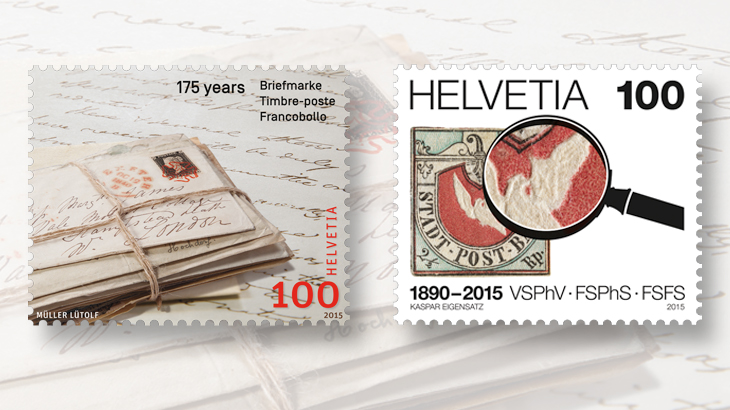 Switzerland issued commemorative stamps Sept. 3 depicting the world’s first postage stamp, the Penny Black of Great Britain; and the Basel Dove, the only stamp issued by the canton of Basel. 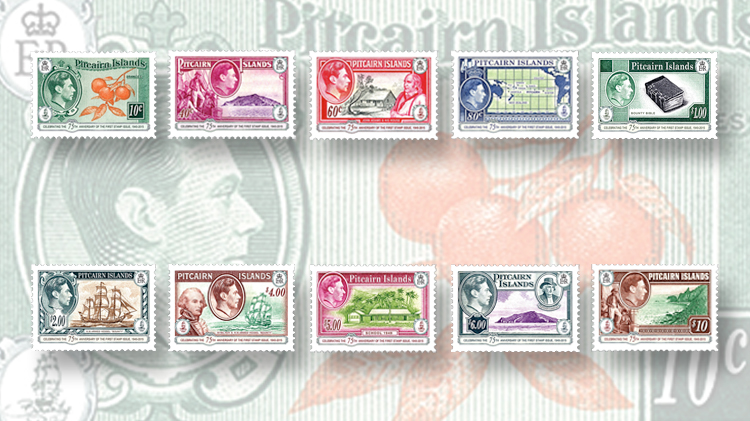 Ten new definitive stamps issued Oct. 15 by Pitcairn Islands reproduce images of Pitcairn’s first stamps of 1940-51. Many of the designs are related to the mutineers of the HMS Bounty. 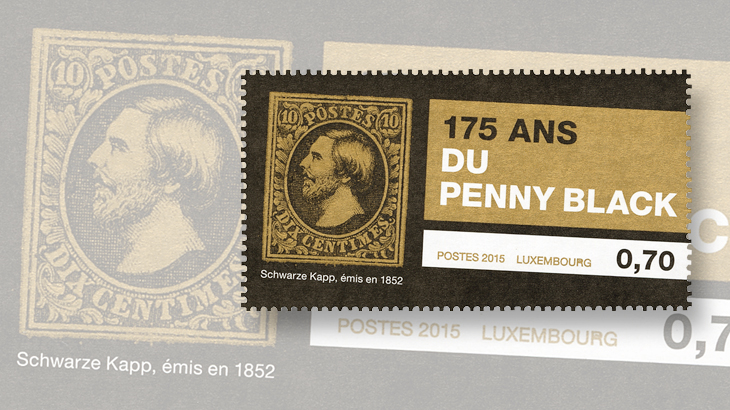 A commemorative from Luxembourg marking the 175th anniversary of Great Britain’s Penny Black of 1840 features a stamp-on-stamp design of the duchy’s first stamp, issued in 1852. The new €0.70 stamp was issued Sept. 22.
Previous
Next

Like many subsequent stamps from Pitcairn Islands, all but three of the 10 designs in the first issue feature Pitcairn’s heritage as the remote South Pacific island settled by mutineers from HMS Bounty.

Three of the stamps picture Fletcher Christian, the master’s mate who led the mutiny (Scott 2, 7 and 8); and another shows John Adams (3), the last surviving mutineer on the island.

The captain of the Bounty is shown with his ship on the 2-penny denomination (Scott 4), and the ship is pictured by itself on the 6d stamp (6).

The 4d stamp (Scott 5A) depicts the Bible from the ship. This stamp is considered to be part of the first set, even though it was issued 11 years later on Sept. 1, 1951. An 8d stamp showing the island’s 1949 school (6A) was issued at the same time.

Rounding out the first set are designs featuring a cluster of oranges (Scott 1) and a map (5).

In addition to images of crew members of the Bounty, the stamps also include a portrait of King George VI.

The king reportedly did not like all of the designs submitted to him for approval.

In the press release announcing the new stamp-on-stamp designs, the Pitcairn Islands Administration said that after being shown the essays for the 1940 issue, the king asked for revisions of some of the designs and rejected others outright “including an image of Fletcher Christian superimposed on a view of Bounty Bay.”

Ironically, those essays are now part of the Royal Collection.

The denominations of the new definitives range from 10¢ to $10.

Denise Durkin designed the stamps, and Southern Colour Print of Dunedin, New Zealand, printed them by offset in sheets of 40 (two panes of 20).

Inscribed across the bottom of each stamp is “celebrating the 75th anniversary of the first stamp issue, 1940-2015.” Other additions to the 1940 designs include the royal cipher of Queen Elizabeth II and the line drawing of the Bounty that has appeared on most Pitcairn stamps of the last decade.

Luxembourg also showcases the design of its first stamp (Scott 1) on a recent commemorative.

However, rather than noting a Luxembourg stamp anniversary, this 0.70 stamp marks the 175th anniversary of the world’s first postage stamp, the Penny Black, issued by Great Britain in 1840.

Luxembourg issued its first postage stamps 12 years later, on Sept. 15, 1852. The stamps, show William III, king of the Netherlands and grand duke of Luxembourg. The 10-centime gray-black stamp from that first issue is featured on the new stamp-on-stamp design issued Sept. 22.

According to information from the philatelic bureau of Luxembourg Post, this stamp design also represents a black stock sheet with a clear, plastic pocket.

Recent stamp-on-stamp designs from Switzerland commemorate the Penny Black and the 125th anniversary of the Union of Swiss Philatelic Societies.

The 100-centime, or 1-franc, stamp honoring the Penny Black’s anniversary shows the world’s first stamp affixed to a cover addressed to London and canceled with a red Maltese cross cancel.

The cover is the top one in a bundle secured by string. A handwritten letter is pictured in the background of this stamp designed by Muller Lutolf.

The Basel Dove, issued in 1845 by the canton of Basel (Scott 3L1), is pictured on the stamp marking the anniversary of the Union of Swiss Philatelic Societies. A detail of the dove’s embossed wing is shown enlarged under a magnifying glass in the design by Kaspar Eigensatz.

Considered one of the most beautiful classic stamps, the Basel Dove was designed by architect Melchior Berri and printed in three colors by the firm of Benjamin Krebs of Frankfurt, Germany.

The two stamps were issued Sept. 3, and both were printed by Cartor Security Printing of La Loupe, France. The Penny Black commemorative was produced in panes of 16, and the Union of Swiss Philatelic Societies stamp in panes of nine with three labels showing the emblem of the union.