Plan ahead and create a Halloween philatelic treat 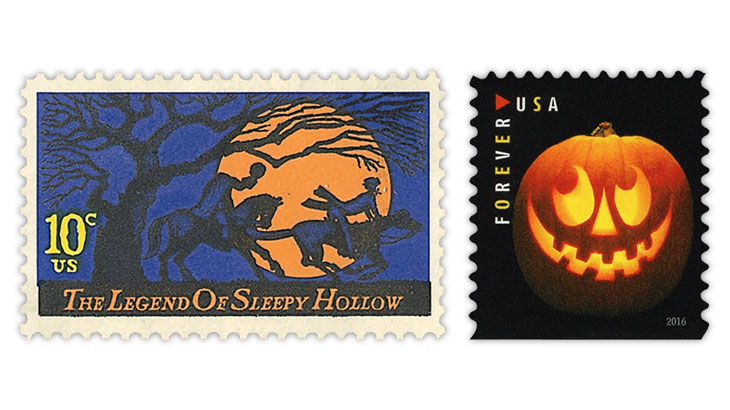 The United States issued its first stamp related to Halloween in 1974, the 10¢ Legends of Sleepy Hollow commemorative (Scott 1548). In 2016, a set of four Jack-O’-Lanterns forever stamps was issued (5137-5140). The stamp depicting a photograph of a jack-o

In only a few months, Halloween (Oct. 31) will be here, and one collector is keen on his idea to get stamps in the hands of children to attract a new generation to philately.

Mark Walters, who only started collecting stamps a year ago, plans to give out Halloween stamp grab bags to “perhaps make a small impact at a local level to create interest in philately among today’s youth.”

In an email sent to Linn’s, Walters explained that these Halloween handouts would contain a few stamps along with a short letter or 3-inch by 5-inch index card with basic information on one of the stamps — preferably one with a Halloween theme — enclosed in the grab bag.

Of course, sweet treats would be offered as well. Walters said that these combined with a “new mini collection of stamps seems like a win-win in my book.”

Walters added that he has already acquired several examples of the first United States Halloween-related stamp, the 1974 10¢ Legends of Sleepy Hollow commemorative (Scott 1548), and plans on including them in the grab bags.

Also, the U.S. Postal Service has announced plans to issue four Spooky Silhouettes stamps this fall, another possible issue to include.

I admire Walters’ passion in getting the word out about stamp collecting, and perhaps his idea will inspire Linn’s readers to do something similar.

Linerless coil stamps are starting to fuse together