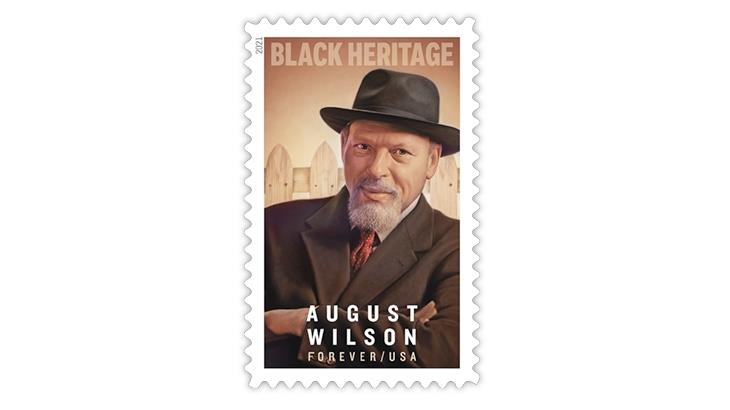 The United States August Wilson commemorative forever stamp will be issued Jan. 28. The stamp celebrating the prominent playwright is the 44th issue in the Black Heritage series. 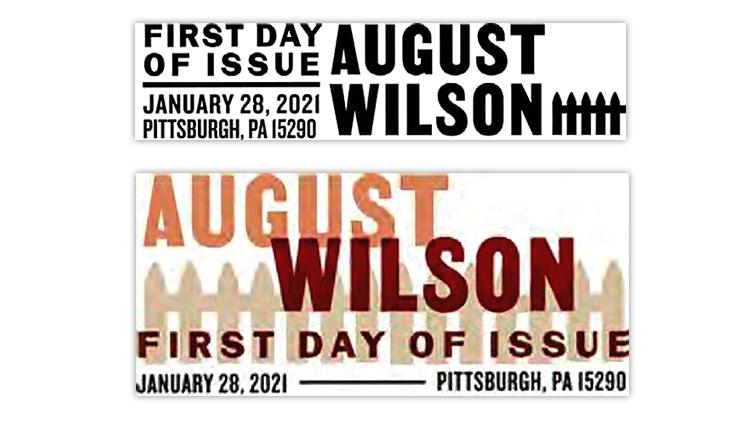 Two pictorial first-day postmarks for the August Wilson stamp show the playwright’s name in block letters and include the image of a picket fence.
Previous
Next

The nondenominated (55¢) forever stamp will be issued Jan. 28 in Pittsburgh, Pa., the setting for many of Wilson’s plays, and will go on sale nationwide the same day.

The Postal Service has scheduled a virtual first-day ceremony that will take place on the issue date at 11:30 a.m. Eastern Standard Time. The event will take place live on the USPS Facebook and Twitter social media channels. For instructions for viewing the event live visit the USPS website.

The new stamp will be issued in a pane of 20, with a banner across the top of the pane that reads “Black Heritage/Celebrating August Wilson.”

The stamp design shows Tim O’Brien’s oil painting of Wilson standing with his arms crossed in front of him, modeled on a 2004 photo of the playwright by David Cooper.

A picket fence in the vignette behind Wilson alludes to the title of his 1987 play Fences, which won the Tony award for best play and the first of Wilson’s two Pulitzer prizes for drama.

August Wilson was born Frederick August Kittel Jr. on April 27, 1945, in Pittsburgh’s Hill District, where many of his plays are set. His father was a white German immigrant, and his mother was an African-American cleaning woman who was primary caregiver for her children.

Recycle, Wilson’s first full-length play, was produced at a Pittsburgh community theater in 1973, but he continued to work odd jobs to support himself. He moved from Pittsburgh to Minneapolis, eventually settling in Seattle, where he lived from 1990 until his death in 2005, survived by his third wife and two daughters.

By the early 1980s, Wilson’s plays were receiving widespread recognition, beginning with Ma Rainey’s Black Bottom, which premiered in 1982, the third play in what would come to be known as the August Wilson Century Cycle, a series of 10 plays that each take place in one of the 10 decades of the 20th century.

Fences and Ma Rainey’s Black Bottom have been made into films under the direction of Denzel Washington, who has expressed his intention to create movies of all 10 plays from the cycle.

The Piano Lesson brought Wilson his second Pulitzer, and it is next on Washington’s list to film.

“In bringing to the popular American stage the gritty specifics of the lives of his poor, trouble-plagued and sometimes powerfully embittered black characters, Mr. Wilson also described universal truths about the struggle for dignity, love, security and happiness in the face of often overwhelming obstacles,” Isherwood wrote in The New York Times.

In announcing the new stamp, the U.S. Postal Service said: “Today Wilson is hailed as a trailblazer for helping to bring nonmusical African American drama to the forefront of American theater. Each new staging of his plays is an opportunity to witness his explorations of the ways that history and tradition burden African Americans while also giving them sustenance in their daily lives.”

The U.S. Black Heritage commemorative series began in 1978 with the release of the 13¢ Harriet Tubman stamp (Scott 1744). Since then, one stamp has been issued in the series each year. Last year’s Black Heritage stamp honored journalist and news anchor Gwen Ifill (Scott 5432).

Both the black postmark and the color postmark display Wilson’s name in large block letters and show an image of a picket fence.

The black postmark is applied at no charge to collector-submitted envelopes. Both are used on first-day covers prepared and sold by the Postal Service.