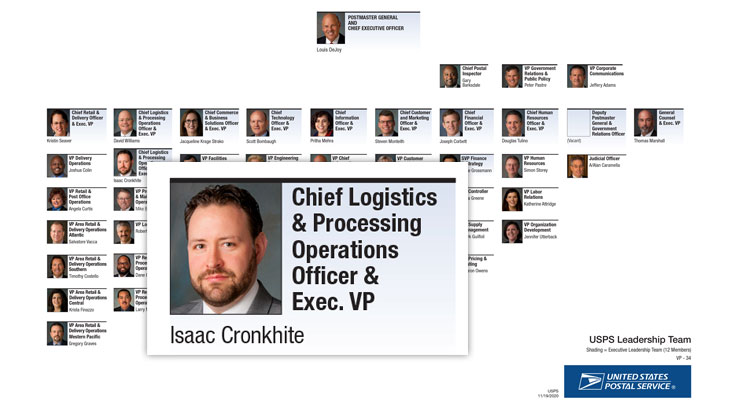 The United States Postal Service announced a reorganization of its leadership team on Nov. 19. Isaac Cronkhite, the agency’s chief human resources officer, will replace David E. Williams who is retiring in 2021.

Postmaster General Louis DeJoy has made his second major reorganization of the U.S. Postal Service since taking office June 15.

The changes, announced Nov. 19, include the retirement next year of David E. Williams, the agency’s chief logistics and processing operations officer.

“These appointments help better align the Postal Service, and also demonstrate our commitment to career development of our own employees by building talent and promoting from within,” the agency said in an announcement.

According to the statement, “These organizational changes will not initiate a reduction-in-force.”

The statement also said that the hiring freeze announced in August will continue.

The last paragraph indicates that more changes are to come: “Further organizational modifications are expected to continue in phased approaches during the next several months.”

Williams, a 33-year postal employee, assumed his newest position in the first DeJoy reorganization, after serving as the agency’s chief operating officer for the past five years.

As the new chief logistics and processing operations officer, Cronkhite will be one of the best paid executives at Postal Service headquarters in Washington, D.C.

According to a filing with the Postal Regulatory Commission, he will be paid $279,700 a year.

In addition, he will receive a $20,000 “lump sum recruitment bonus,” the filing said.

The 42-year-old Cronkhite is to “devote his immediate efforts to longer term strategic issues related to the Logistics and Processing Operations function, and to acclimating to his new duties,” the filing said.

Cronkhite has been a USPS executive vice president since January 2019. Prior to that, he served as vice president, enterprise analytics for the USPS from May 2016 to June 2019.