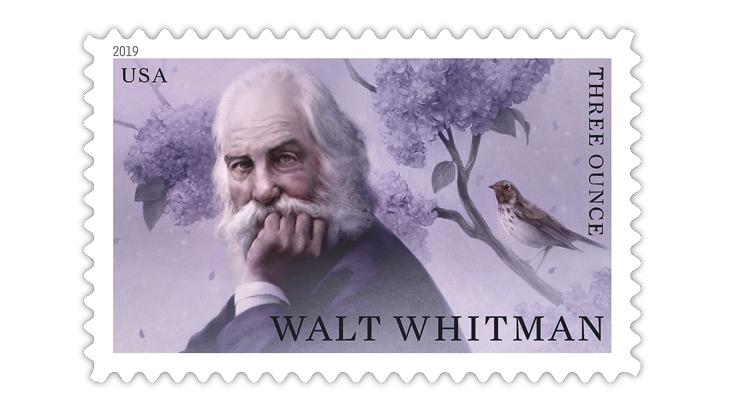 A new 3-ounce-rate stamp in the United States Literary Arts series honors poet Walt Whitman. The stamp will be issued Sept. 12 at the Walt Whitman Birthplace in New York. 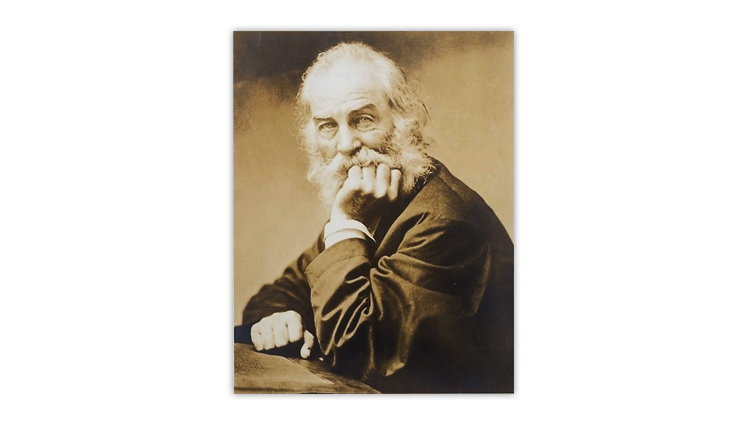 The Walt Whitman portrait on the new stamp is modeled after this 1869 photograph of the poet by G. Frank E. Pearsall. Source: Library of Congress, Manuscript Division, Walt Whitman Papers (MMC). 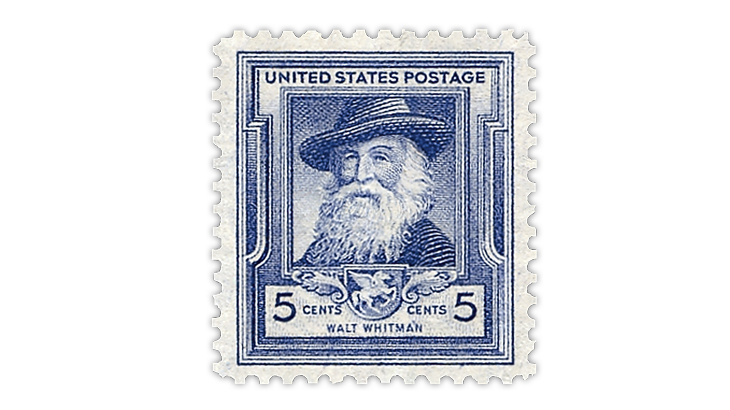 Walt Whitman was previously honored on a 5¢ stamp in the U.S. 1940 Famous Americans series. 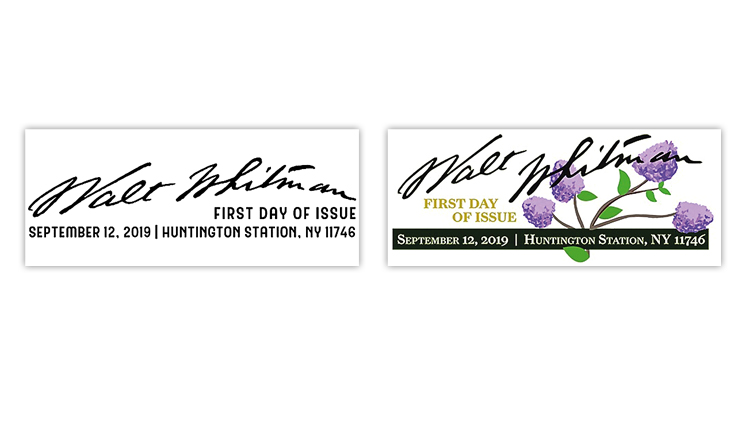 The U.S. Postal Service will offer two pictorial first-day cancels, one black-and-white and the other in color, reproducing Whitman’s signature.
Previous
Next

American poet Walt Whitman will be honored Sept. 12 on a new United States stamp in the Literary Arts commemorative series.

The stamp celebrates Whitman during the bicentennial of his birth year.

The nondenominated stamp is inscribed “THREE OUNCE” to indicate its intended use for first-class domestic mail weighing no more than 3 ounces. That rate is currently 85¢, the selling price for the new stamp. The stamp will remain valid for the 3-ounce rate regardless of future rate changes.

Although the event is free and open to the public, the U.S. Postal Service notes that seating is first come, first served and advises those planning to attend to arrive early.

Thomas J. Marshall, USPS general counsel and executive vice president, will serve as the dedicating official at the ceremony. Cynthia Shor, the executive director of the Walt Whitman Birthplace Association, will also participate.

The horizontal portrait of Whitman is based on a vertical photograph taken in 1869 by Brooklyn-based photographer George Frank Edgar Pearsall (1841-1927). Whitman was about 50 years old at the time.

The stamp portrait adds a flowering lilac branch behind the poet. Perched on the branch is a hermit thrush.

The bird and branch are references to When Lilacs Last in the Dooryard Bloom’d, an elegy for President Abraham Lincoln written by Whitman shortly after Lincoln’s assassination on April 14, 1865.

The Walt Whitman stamp is being issued in panes of 20 with a simple printed banner at top that reads “LITERARY ARTS 32ND IN A SERIES.”

Whitman was born May 31, 1819, in West Hills, N.Y., a hamlet in the town of Huntington on Long Island. At age 11, he left school and began working in an office to help with his family’s finances.

As an adult, he worked as a journalist and newspaper editor in Brooklyn and began composing poems. His first edition of Leaves of Grass, a collection of 12 poems, was self-published in 1855. An expanded edition appeared the following year, and Whitman would revise the book several times during his lifetime.

After the Civil War, Whitman was employed by the U.S. Department of the Interior and continued writing. Drum-Taps appeared in 1865, compiling poems about the war.

“Influenced by the cadences of biblical verse, opera, and the essays and poetry of Ralph Waldo Emerson, Whitman wrote in an unconventional, organic new style that mimicked the rhythms of ordinary speech and gave a distinct voice to the American spirit,” according to the Postal Service.

“Whitman broke away from dominant European poetic forms and experimented with free verse and colloquial expressions, writing powerfully about nearly every aspect of 19th-century America.

“His groundbreaking works include the monumental ‘Song of Myself,’ in which he argues that only through democracy, and the broad liberty that it promises, can the country approach the divine. Other poems include ‘Crossing Brooklyn Ferry,’ the best known of his urban pieces; the intimate, reflective ‘Out of the Cradle Endlessly Rocking’; and ‘I Sing the Body Electric,’ in which Whitman boldly treats the physical, sensual body as equal to the soul.”

The new stamp is the second U.S. issue to honor Whitman. A 5¢ blue stamp showing the poet (Scott 867) was issued Feb. 20, 1940, in the American Poets set, part of the Famous Americans series.

The Postal Service has styled two pictorial first-day cancels for the new stamp, both featuring a facsimile of Whitman’s signature. The color version also includes a lilac branch, similar to what is shown in the stamp design.