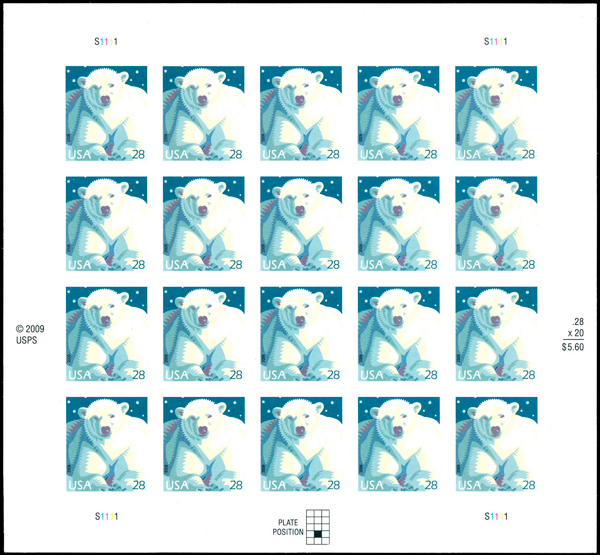 This die-cutting-omitted error pane of 20 United States 28¢ Polar Bear stamps was discovered in an auction consignment in late 2013. The pane will be sold at auction in April by Michael E. Aldrich, Inc.

Michael Aldrich, a dealer, auctioneer and U.S. revenue specialist based in Carefree, Ariz., contacted Linn’s about the new find, which he discovered in late 2013 while sorting through an auction consignment.

"This pane was part of a consignment out of Tucson, Ariz.," Aldrich said. "The consignor is the widow of a specialized Latvia collector. There was some miscellaneous U.S. face material included with the consignment.

"Interestingly, when we were going through the consignment and writing up the collection for auction, we came across a post-office envelope with this sheet included."

Aldrich said the intact error pane will be sold at one of his upcoming auctions.

"We will be offering this new discovery in our April Michael E. Aldrich auction. Our presale estimate puts this sheet in the $10,000-$15,000 range," he said.

The new error will be listed in the 2015 edition of the Scott Specialized Catalogue of United States Stamps and Covers as Scott 4387a.