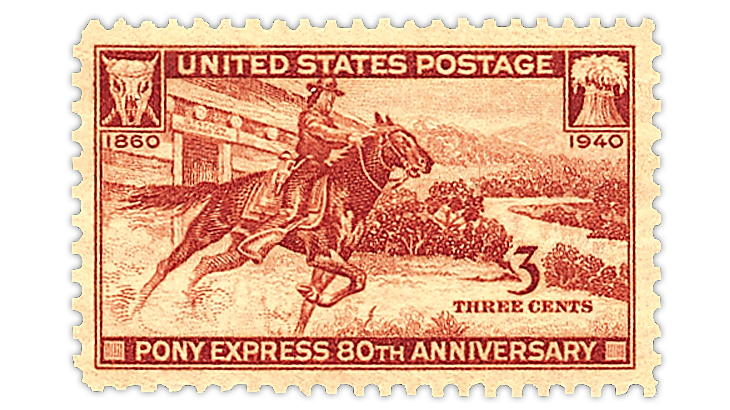 The cartoon caption contest stamp for August is the United States 1940 3¢ stamp honoring the 80th anniversary of the Pony Express. Entries must be received by Aug. 23 for a chance to win a prize. The rules are in the accompanying article.

The 80th anniversary of the Pony Express was celebrated on a 3¢ commemorative stamp issued April 3, 1940 (Scott 894).

The action-packed design captures some of the dash and glory that the Pony Express system brought to the effort to speed the mails between the rapidly developing West Coast of the United States and the more established parts of the country back East.

That 3¢ stamp will be the cartoon caption contest stamp for August.

Can you think like a horse or would you rather think like the rider? The choice is up to you. Put yourself on the horse or be the horse and tell me what you think one or the other might be thinking or saying.

There will be two prizes given to the winners: one for the best horse line, and one for the best rider line. The important thing is to use your sense of humor, because entries with a humorous twist have the best chance of winning a prize.

For each winner, the prize will be a 13-week subscription to Linn’s (a new subscription or an extension). Entries must reach me no later than Aug. 23.