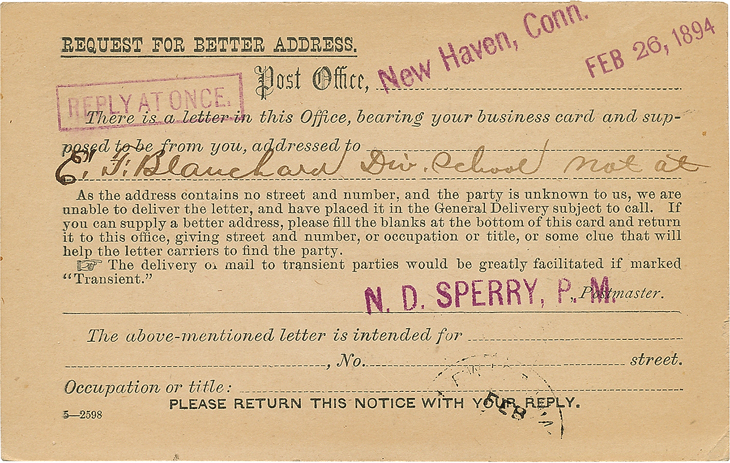 This is a Feb. 26, 1894, example of Post Office Department Form B-22, sent by the delivery post office to the writer of a letter with an inadequate address, seeking information to make delivery possible. Meanwhile, the undeliverable letter was placed in General Delivery. 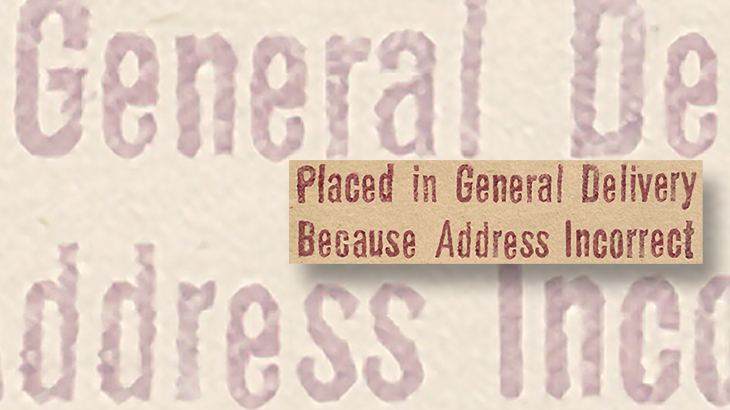 This is an enlargement of the handstamped marking, previously unknown to the author, on the undeliverable 1922 letter shown in the second illustration. 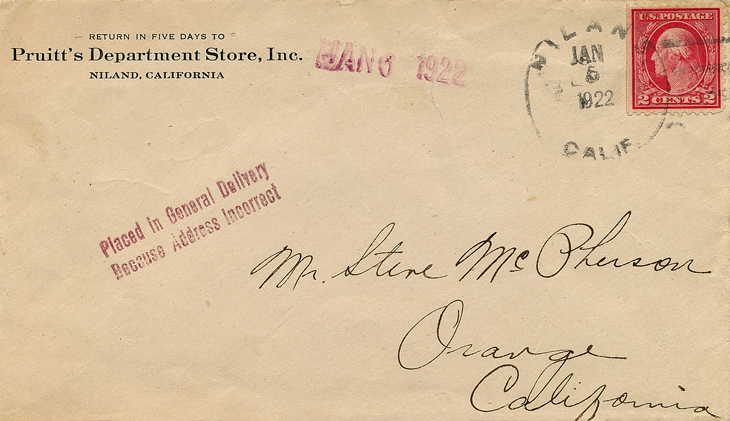 This letter mailed Jan. 6, 1922, in Niland, Calif., was undeliverable because it had no street address. It was placed in General Delivery, and presumably a form similar to that shown in the first illustration was sent to the writer, attempting to obtain a good address.
Previous
Next

For years I have studied and exhibited the return of unmailable and undeliverable mail. A year or so ago, I was able to buy the “REQUEST FOR BETTER ADDRESS” Form B-22 shown nearby.

This request form was sent to the writer of a letter or postcard when the office of delivery recognized that the letter’s address was inadequate and the item, therefore, was undeliverable.

In part, the form states: “As the address contains no street and number, and the party is unknown to us, we are unable to deliver the letter, and have placed it in General Delivery subject to call. If you can supply a better address, please fill the blanks at the bottom of this card and return it to this office, giving street or number, or occupation or title, or some clue that will help the letter carriers to find the party.”

This type of message had to have been placed by the delivery office, as only that entity would be in a position to say that “the party is unknown to us.”

One month ago, I was able to purchase the Jan. 6, 1922, letter illustrated here. It is franked with a 1910 2¢ Washington-Franklin series stamp paying the up-to-1-ounce domestic letter rate.

The letter also carries a handstamp I have never seen before, one that relates to the “Request for Better Address” form.

Note that the 1922 letter had no street address, and thus was considered undeliverable.

Presumably, a form similar to that in the first illustration was then mailed to the writer of the letter, in an attempt to obtain a better address.

The letter was mailed on Jan. 5 or 6, 1922, in Niland, Calif., (the postmark date is not entirely clear) and the second dated handstamp, the red “JAN 6 1922,” suggests to me that this is the date that the letter was placed in General Delivery in Orange, Calif.

The postcard form is for another, much earlier letter (it’s dated Feb. 26, 1894), but one can assume that a similar one was sent to the writer of this 1922 undeliverable letter, requesting a better address.

Even though I do believe that the 1922 letter was placed in General Delivery at the delivery post office, I have difficulty with this scenario for two reasons.

First, this was an undeliverable item. Time and time again, I have found that for undeliverable matter, new postage was required for remailing.

There is no comment anywhere on the form or letter that suggests the requirement for new postage if the letter was remailed after address correction.

Second, if the circular datestamp is “JAN 6 1922,” it is the same as the red handstamped date to its left on the letter.

In guessing that this second, handstamped date is the one on which the letter was placed in General Delivery, it is difficult to understand that these two dates were applied at the mailing office and the delivery office on the same day in January 1922.

An online mapping site indicates that Orange is 194 miles from Niland via a state highway, for a trip of about 3½ hours at today’s speeds.

It is possible, however, that the unclear postmark date is actually Jan. 5 — the day before the second dated handstamp.

Independent of these concerns, these items are, to me, a remarkable juxtaposition of postal history ephemera.