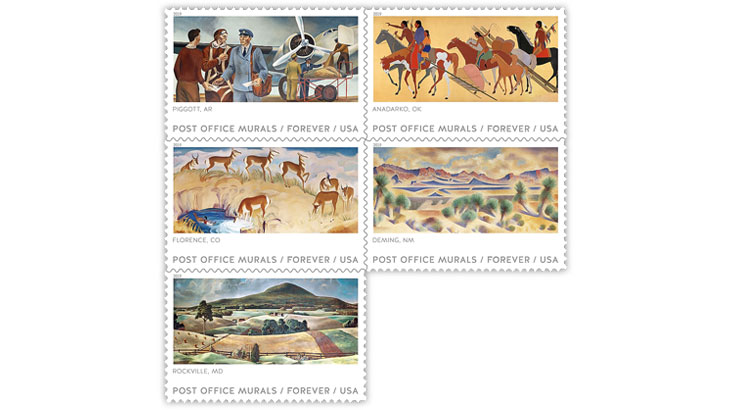 A set of five forever stamps commemorating post office murals will be issued April 10 in a pane of 10. The stamps show artwork commissioned during the Great Depression to decorate federal buildings. 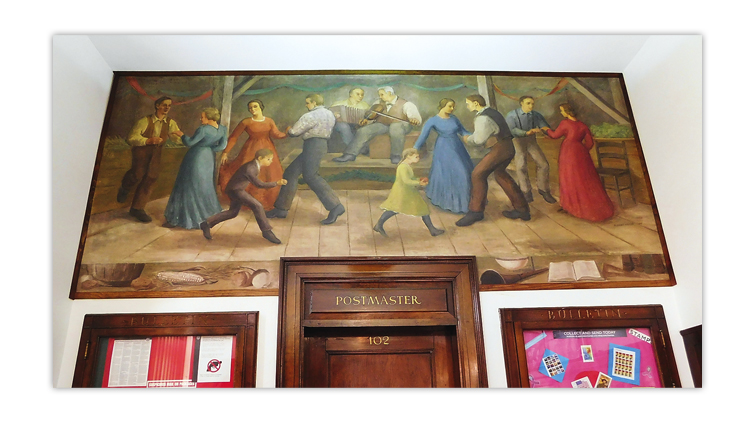 Many murals still can be viewed by the public at post offices around the United States. Country Dance, an oil-on-canvas painting by Albert Kotin, was completed in 1940 and installed in the lobby of the Ada, Ohio, post office constructed two years earlier. 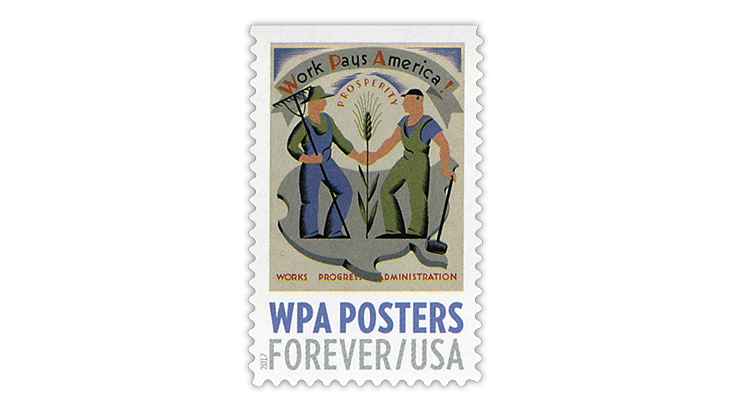 Depression-era artwork commissioned by the Works Progress Administration was featured on a set of 10 U.S. forever stamps issued in 2017. 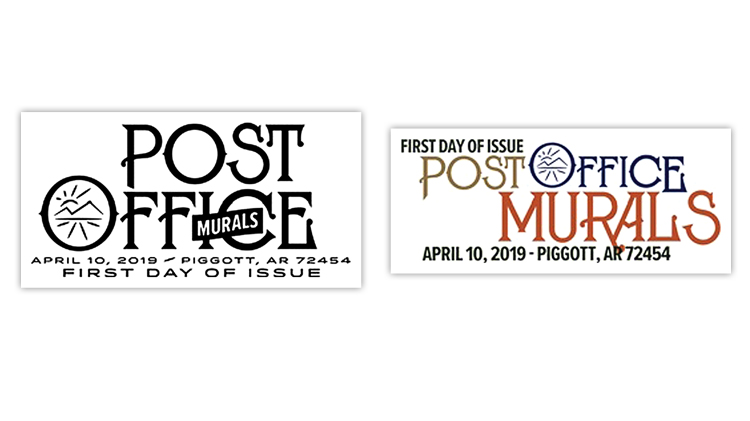 Two pictorial-style first-day cancels celebrate the Post Office Murals commemorative forever stamps. Both feature the name of the issue and a simple landscape scene within the letter “O” of “Office.”
Previous
Next

The United States Postal Service is issuing a new set of five forever stamps to celebrate an appealing element of its long history that often goes unrecognized.

The nondenominated (55¢) Post Office Murals stamps will be issued April 10 in a pane of 10.

Each stamp in the set pictures a different mural commissioned during the Great Depression and installed in a post office building. The stamps each include an inscription naming the city and state where the artwork is located.

One of those towns is Piggott, Ark., which will host the first-day ceremony for the new set.

The ceremony is open to the public, but the Postal Service encourages attendees to register in advance at usps.com/postofficemurals.

America’s post office murals were created primarily during the Great Depression that ensued following the 1929 stock market crash. In line with the many work programs developed by the administration of President Franklin D. Roosevelt beginning in 1933, artists were commissioned by the Treasury Department’s Section of Fine Arts to create paintings and sculptures intended to beautify public buildings.

Federal post offices, many of them built during the same period, received several of these artworks. Artists around the country sought to provide scenes relating to the community where the artwork would be displayed.

An effort was made to illustrate hopeful scenes of work and community bonding during what was an extended period of economic hardship.

Over the years, some of this artwork has been lost, painted over or destroyed, but more than 1,000 works remain on display in post offices all over the country.

Online resources, including wpamurals.com, Wikipedia and others, provide guidance for locating existing murals.

“The Postal Service is committed to the upkeep of these classic paintings and has a federal preservation officer and historian to both help maintain the beauty of the murals and also educate the public about their place in postal lore,” according to the USPS. “Today, many of these works have been restored and remain on display for the public to enjoy.”

The new set is the second in two years to illustrate artwork sponsored by federal agencies during the Great Depression. The set of 10 Works Progress Administration Posters forever stamps was issued March 7, 2017, in a double-sided pane of 20 (Scott 5180-5189).

On its online Postal Store at https://store.usps.com, the Postal Service provided capsule descriptions of the five murals featured on the new stamps.

The Piggott, Ark., stamp illustrates Air Mail, a 1941 oil-on-canvas painting by Daniel Rhodes (1911-1989). The painting shows bags of mail being loaded onto an airplane as three men, including a local letter carrier and a pilot, exchange letters in the foreground.

The stamp labeled Anadarko, Okla., illustrates the 1936 tempera painting Kiowas Moving Camp, a 1936 work by Stephen Mopope (1898-1974). It is part of a 16-canvas mural completed by a group of Native American artists from Oklahoma known as the Kiowa Six.

Olive Rush (1873-1966), an Indiana-born Quaker who settled in New Mexico, completed Antelope in 1939 for the Florence, Colo., post office. Her tempera painting features a pronghorn herd.

A 1937 oil-on-canvas painting by Kenneth Miller Adams (1897-1966) titled Mountains and Yucca is featured on the Deming, N.M., stamp. The landscape shows yucca shrubs and other plants from Cookes Range in southwestern New Mexico, according to the Postal Service.

The 1940 oil-on-canvas painting Sugarloaf Mountain by Judson De Jonge Smith (1880-1962) was created for the Rockville, Md., post office. The landscape mural is still displayed in the original post office building, which today serves as the headquarters of the Rockville City Police Department.

The depicted murals in Arkansas, Oklahoma, Colorado and New Mexico are also still displayed in the post offices where they were first installed.

The Postal Service will offer two pictorial first-day cancels for the new stamp set. Both the black cancel and the digital color postmark prominently feature the name of the stamp issue — Post Office Murals — and include a sketched mountain landscape within the letter “O” of “Office.”