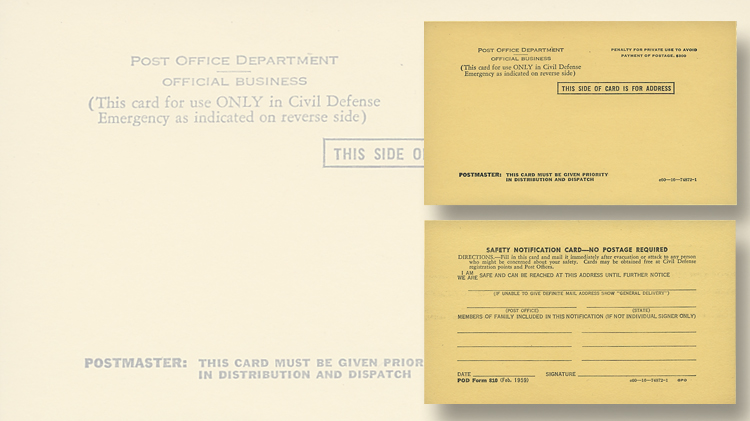 This post office Form 810 (shown front and back) was issued in February 1959, and reissued in 1990. The form directs users to “mail it after evacuation or attack to any person who might be concerned about your safety.”

I rarely reprint text from my old columns, but a recent letter prompted me to revisit the column of May 6, 1996, headlined “How to tell a friend you’ve been H-bombed.”

The letter was from Linn’s reader John Petrizzo, who had found one of the Post Office Department’s safety notification cards featured in that column, Form 810 issued in February 1959.

“I came of age in the 1950s and early 1960s — the era of nuclear terror — and I recall with no fondness whatsoever the air raid drills, bomb shelters, and the arms race … There was no doubt in my mind that nuclear war was possible — either through error or choice.

“Thus, it was with a palpable feeling of relief that I witnessed the dissolution of the Soviet Union and the considerable lessening of the threat that its presence represented.

“We’re not, as a world, out of the nuclear woods yet. Take for example the smuggling of Russian nuclear materials, and the threat of nuclear terrorism, and the possibility that Saddam Hussein may soon have the bomb [now we can substitute North Korea for Iraq].”

Form 810 was a postage-free card created for the purpose of getting in touch with family members to let them know that the sender had survived the nuclear holocaust.

When I received Petrizzo’s letter, I had forgotten that this had been a column subject in 1996, but I happened upon it while doing some filing.

A lot of water has flowed over the dam in the 20 years since then, but in my folder for that column I found a few responses to the column that warrant a follow-up.

The first is from Dina Lord. She reported that after she became postmaster of Indianola, Pa., in August 1995, she discovered several boxes of Form 810 while cleaning out the storage room.

She checked to see if the form was still current, and it was, with the most recent version of the form dated October 1990.

Another letter, from Brian Saxe, then an employee of the Bureau of Engraving and Printing, enclosed a page from the BEP’s mobilization readiness instructions, dated May 5, 1978. The document was titled “Nationwide Post-Attack Registration of Federal Employees.”

Among the instructions is this one: “In the event of a National Emergency, brought about by an attack upon the United States … Go to the nearest Post Office and ask the Postmaster for a Federal Employee Registration Card, fill it out and return it to him.”

I’ve never seen one of these forms, and presumably both this one and Form 810 have been struck from the post office form list since the real risk of nuclear war seems to have been considerably diminished. However, I would like to hear from postmasters if that is the case, or if the forms are still current.