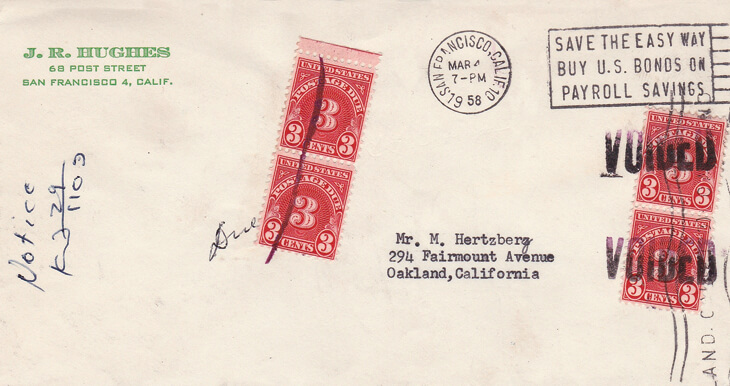 This March 4, 1958, letter was mailed at the 3¢ up-to-1-ounce rate, but unpaid at the office of delivery. Double the postage, or 6¢, was due, but the two 3¢ postage due stamps at right were not used to collect the 6¢ and were correctly “VOIDED.” The second pair of 3¢ postage dues was not voided, meaning the 6¢ due was collected from the addressee, and therefore the first set of stamps did not indicate collection of the due postage. 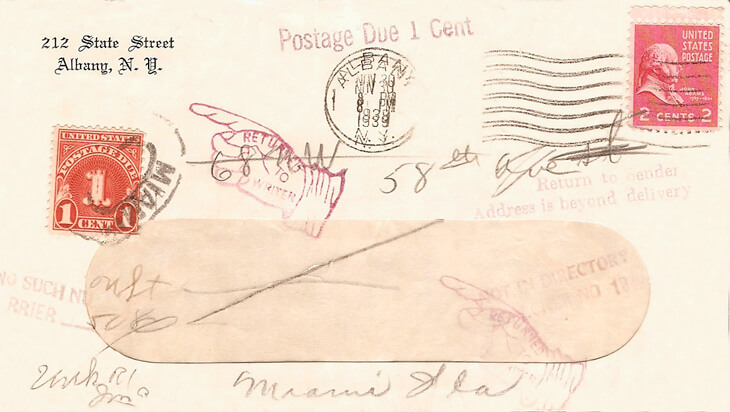 This 1939 letter was mailed in Albany, N.Y., at the 2¢ carrier-office drop rate. It was forwarded to Miami, Fla., with 1¢ postage due because the inter-city rate was 3¢. The 1¢ postage due stamp was affixed to the envelope at the Miami post office, but the undeliverable letter was returned to the writer. There was no addressee from whom to collect the postage due, and the due stamp had been affixed before payment could be collected. Thus, remarkably, this postage due stamp never represented the actual collection of the due amount.
Previous
Next

As I mentioned in my Feb. 13 Linn’s column, I am studying how United States postage due stamps have been used since they were introduced in 1879.

As noted then, basically there are two ways in which U.S postage due stamps were used. First, they indicated shortpaid or unpaid postage due that was collected (unless the item was forwarded, undeliverable, sent to the Dead Letter Office, and so on), or second, they indicated actual collection of some type of fee.

In this column, I will discuss nuances of the first type of use. Almost all of the citations represent my own original research.

In this first case, the rules that defined the use of postage due stamps existed from when they were first introduced July 1, 1879, until at least the publication of the last Transmittal Letter of the U.S. Postal Service Postal Manual, dated Aug. 21, 1978.

On the other hand, at letter-carrier post offices (also called free delivery or city delivery offices), the postage due stamps were to be affixed on the shortpaid item as soon as it arrived at the office of delivery.

How does one determine whether a city’s post office was a letter-carrier or non-letter-carrier office? The first such list pertinent to postage due stamp use, called the “List of Carrier-Delivery, or Free Delivery Post Offices,” was published in the July 1879 U.S. Official Postal Guide.

I am unable to find a subsequent list, even though non-letter-carrier rates continued until Jan. 6, 1967, and such post offices remained until and after postage due stamps were discontinued Oct. 2, 1986. (See additional information in the last paragraph in this article.)

I’m now going to describe two examples of due covers, both of which illustrate postage due stamp use where the stamps did not represent collection of the shortpaid postage.

A drop letter, traditionally, is a mailpiece left at the post office for the addressee to collect.

From the introduction of postage due stamps July 1, 1879, until Jan. 7, 1968, drop letters, when forwarded, were rated for collection of additional postage for the difference between the amount already prepaid and the total postage computed, if the inter-city rate was greater than the drop rate.

At the same time, noncarrier drop rate forwarding, where rates remained unequal, is rarely seen. So, except for the short early period from 1879 until 1883, examples of any type of drop forwarding with postage due stamps are generally seen only after July 1, 1933, and then only for carrier-office drop forwarding.

The July 1, 1933, date is when the carrier-office drop rate became 1¢ less than the inter-city rate of 3¢. As announced in the August 1933 supplement to the Postal Guide, as of July 1, 1933, drop letters prepaid 2¢ and addressed for local delivery could be forwarded to another post office rated with postage due to be collected from the addressee on delivery.

The 1939 up-to-1-ounce domestic surface letter in the first illustration was mailed in Albany, N.Y., at the carrier-office drop rate of 2¢ for up to 1 ounce. It was then forwarded to Miami, Fla., correctly rated “Postage Due 1 Cent,” because the inter-city rate was 3¢ for up to 1 ounce.

Now let’s turn our attention to the cover in the second illustration.

As of July 1, 1956 (Postal Bulletin 19952), if a shortpaid letter with postage due stamps on it was undeliverable, forwarded, sent to the Dead Letter Office, or for some other reason did not indicate collection of postage due, the stamps were henceforth to be “VOIDED” and credit for them was to be obtained.

In the second illustration, the March 4, 1958, domestic surface letter mailed at the up-to-1-ounce rate of 3¢ was unpaid at the office of delivery. Therefore, double the postage, or 6¢, was due, as indicated by the first set of postage due stamps affixed at the right.

For some reason, the stamps were not used to collect the 6¢ due, and they were correctly “VOIDED.”

Then, a second pair of 3¢ postage dues was added, and the fact that they were not “VOIDED” means that the 6¢ postage due was collected. Therefore, the first set of postage due stamps did not indicate collection of the due postage.

As I slowly determine the rules that governed postage due stamp use, I find there is frustrating inconsistency in the manner with which such stamps were used over the years. Also, as I will show in a subsequent column, remember that meter stamps are postage due stamps, and they were correctly used after Oct. 2, 1986.