Postage dues not valid for postage; nondelivery due to ‘snake in box’ 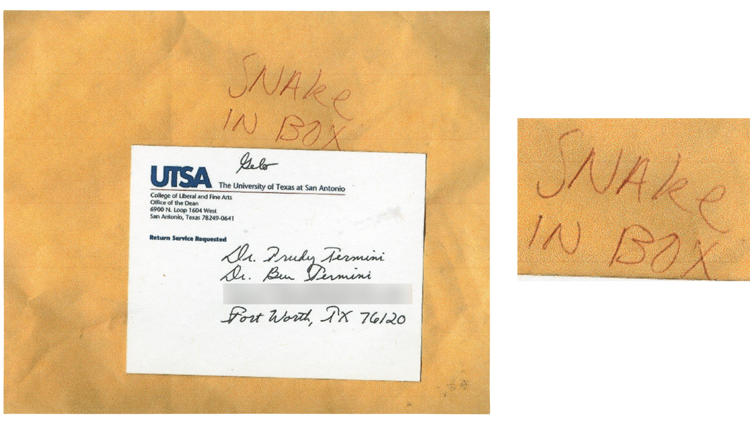 This manila envelope is marked “snake in box,” as an explanation of why the mail was not delivered to that mailbox the previous day. 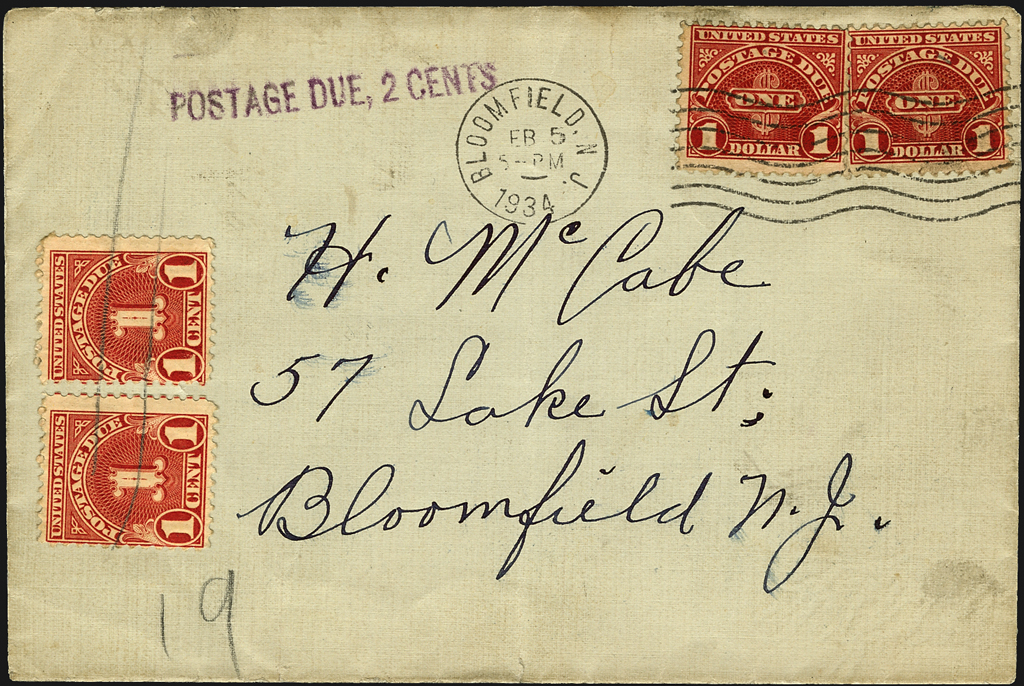 This postage-due cover is even more unusual. The mailer is not identified on the cover, but he or she apparently mistook two $1 postage due stamps for regular-issue 1¢ stamps. 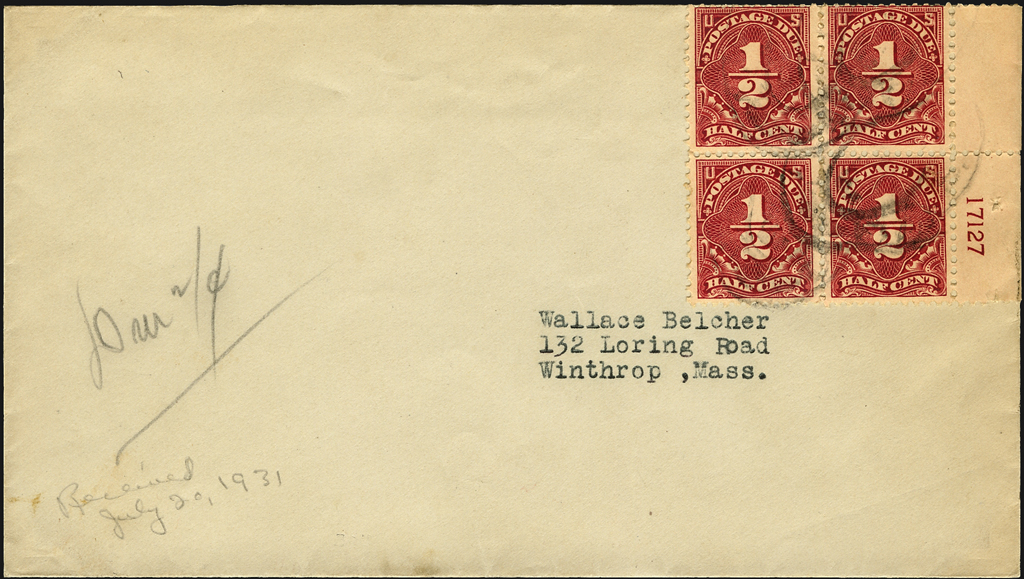 This envelope from the 1930s has a block of four postage due stamps affixed. The stamps were improperly intended to act as postage. Despite this, the cover was delivered.
Previous
Next

United States postage due stamps are not valid for postage, but shown nearby are two attempts to use them as such. Both were unsuccessful.

The two covers bear postage due stamps from both ends of the face-value scale: ½¢ and $1. (The highest face value of a postage due is $5.)

One cover is franked with a plate block of four of the 1925 ½¢ dull red (Scott J68), canceled with a parcel post cancellation.

No date or place of mailing is evident, and there are no markings on the back of the cover to help.

Only the one plate number, 17127, was used to produce these stamps.

Apparently the post office recognized that the stamps were postage due, and thus not valid for postage, and wrote “Due 2c” on the cover.

There is no evidence that the due amount was ever collected. Still, delivery appears to have taken place as there is a pencil notation in a different hand noting, “received July 20, 1931.”

The second cover is even more unusual. The mailer is not identified on the cover, but he or she apparently mistook two $1 postage dues stamps (Scott No. J77, the perf 11 version) for regular-issue 1¢ stamps.

The first-class drop rate in February 1934, when this locally addressed cover was sent, was 2¢.

Somehow this seems unfair, although perfectly legal. Not only was the mailer out the $1.98 over the actual cost of proper postage, but the recipient had to pay for the sender’s mistake.

The postage due stamps were already invalid for postage the moment they were sold, so the post office had its money and was obligated to provide no service.

When the sender tried to use the stamps as postage, he created work for the post office to specially handle the letter to collect postage due. That would certainly have cut into the $2 of profits, and I would bet that the 2¢ postage due ultimately collected did not cover that cost.

Of all the possible reasons for nondelivery of mail, I can think of none more valid than the mail carrier finding a snake warming itself in the sun-baked metal of a mailbox.

Apparently, the snake was surprised, too, as it was gone by the time the mailbox was checked by the owner later in the day.

It was then that the recipient, my friend Dr. Ben Termini of Fort Worth, Texas, found the envelope shown nearby with the handwritten note “Snake in box.”

Being a postal history collector, he got to the bottom of the story, as follows:

“I certify that the large manila envelope marked ‘Snake in Box’ is genuine, and the cover is unmodified. This event occurred in the fall of 2013, at my home. We did not receive any mail for one day, and the following day this was in my mail box explaining why. I personally spoke with the postmistress of the Handley Station in East Fort Worth and verified that there was indeed a snake in the mail box. I asked her if carrier had identified what type of snake it was, but he [the carrier] had not stayed in the vicinity long enough to make a positive identification.”

I supposed this might be thought of as an occupational hazard in Texas and the great Southwest, but if I were the letter carrier, I would have considered immediate retirement.