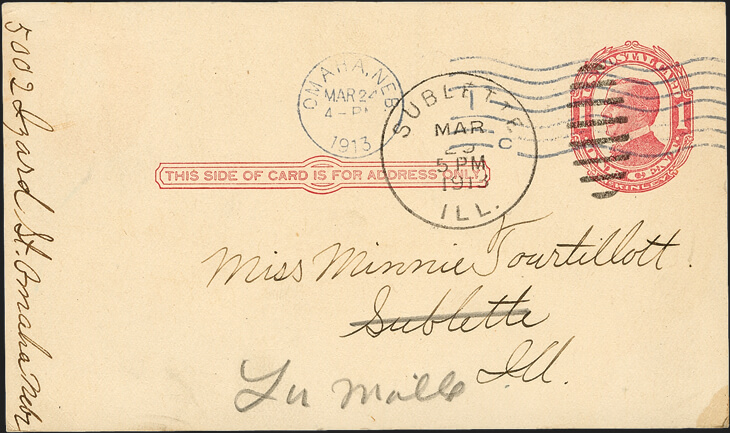 This 1¢ McKinley postal card was sent March 24, 1913, from Omaha, Neb. It includes first-hand information about the extent of damage from the tornadoes that hit Omaha on March 23, Easter Sunday.

From birth to death, the lives of ordinary Americans in the 1870s to 1950s can be read on the back of penny postal cards.

The postal card was a cheap and quick way to keep in touch in the days before private telephones, and long before email.

I like to read postal cards because they are a window on what motivated our ancestors and how they lived, and provide clues to what was going on in their world.

Seldom do I hit pay dirt to the extent represented by the 1¢ red McKinley card shown nearby. The card was issued 1911. It was sent from Omaha, Neb., on March 24, 1913, to Sublette, Ill., and then forwarded.

The message on the back of the postal card reads:

“Dear Minnie. I want to let you know we are all right. The cyclone did not hit Dundee. Was ¾ mi. from us. But so many of my friends have lost their homes. It is so sad. As far as we know only one of our friends was killed. Will write more later love, Lucile.”

Doing a little research courtesy of Wikipedia, I found out that a devastating string of tornados took place in the upper Midwest on March 21-23, 1913. On March 23, four F4 (wind speeds of 207 to 260 mph according to the scale developed by Tetsuya Theodore “Ted” Fujita in 1971) tornadoes hit parits of eastern Nebraska and western Iowa, killing at least 168 people.

The deadliest of the four was 440 yards in width when it passed through northern Omaha, at approximately 6 p.m. that Easter Sunday, killing some 94 people in the city and nine more beyond the city limits. Some believe its winds reached F5 status (between 261 and 318 mph).

The tornado was so strong that steel train cars were pierced by pieces of shattered lumber from demolished homes.

Approximately 2,000 homes in Omaha were destroyed, and damage was estimated at $8 million 1913 dollars.

No doubt Lucile was thanking her lucky stars that she was not affected. But these events being somewhat random, I also bet that she had a few sleepless nights worrying whether the next one might get her!

Somehow reading her message makes it all a little more real than reading the statistics.