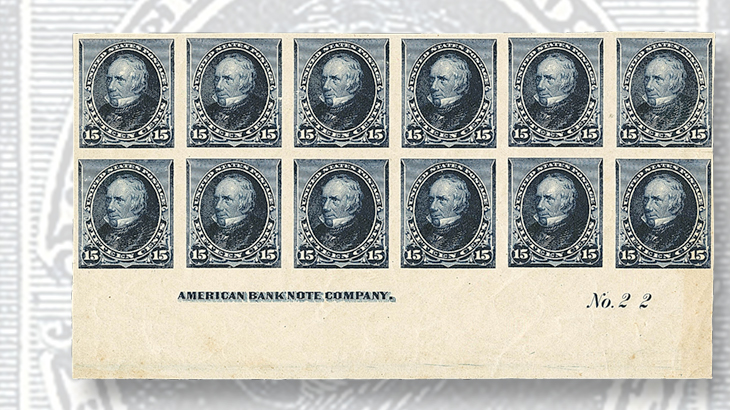 Siegel sold this imperforate plate block of 12 of the 1890 15¢ Henry Clay stamp for $5,015. Although printed on stamp paper, the block is considered a proof. 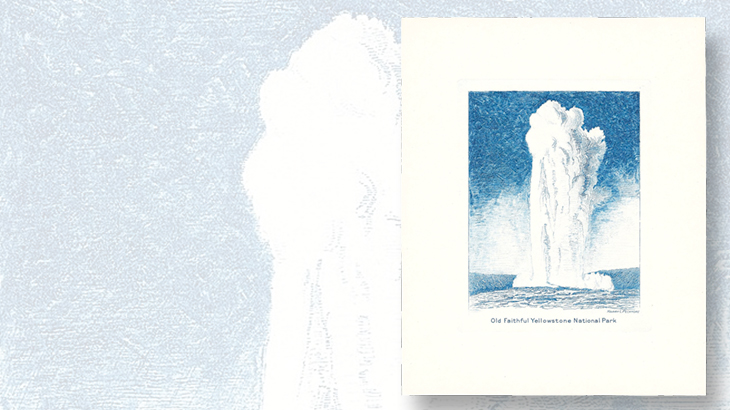 Amid a selection of essays in the Siegel auction was a set of 10 large-size prints of the imagery for the 1934 National Parks commemorative series, prepared by H.L. Lindquist for Stamps magazine, which realized $649. Shown is the print featuring artwork f 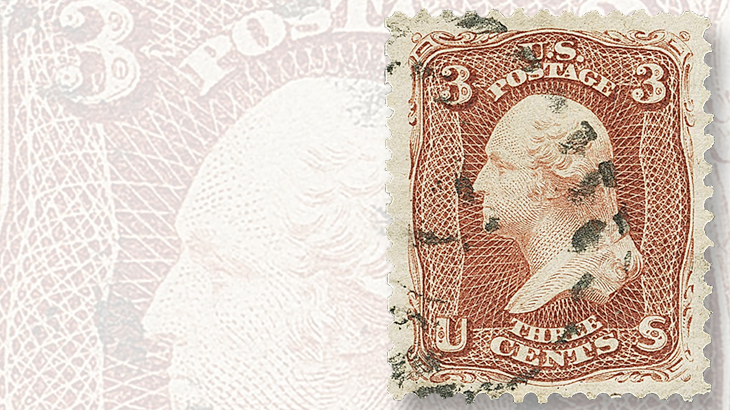 Robert A. Siegel Auction Galleries held a sale of U.S. stamps July 25-26. Among the highlights was a postally used reissue of the 3¢ Washington stamp of 1861.

In 1875, to commemorate the upcoming centennial of the United States, the Post Office Department commissioned reissues of all U.S. stamps to date.

These reissued stamps, distinguishable from the originals mostly by their proof-like impressions on hard, white paper, were offered for sale to collectors. Most went unsold. Of the few that were sold, most were retained, but a few ended up being used on mail.

In the case of the 3¢ (Scott 104), some 465 of the 10,000 printed were sold before the remaining stamps were destroyed. An illustrated Siegel census, published here, shows 24 examples that are known used.

The one offered by Siegel, with a light cancel leaving most of the design clear, has a tiny corner crease and is reperforated down the left side. It sold for $8,850, including the 18 percent buyer’s premium added by Siegel to all lots.

A stunning plate block of 12 of the 1890 15¢ Henry Clay stamp (Scott 227) was offered as one of just two known imperforate plate blocks of this issue.

Although it can be found as an imperforate plate proof on India paper (227P4), the block offered by Siegel is on stamp paper.

After Siegel offered a similar block in their 2015 sale of the Robert Hall collection, a new listing was added to the Scott U.S. Specialized catalog, numbered 227P5. The realization in this sale, $5,015, matched the 2015 result.

Amid a selection of essays was a set of 10 large-size prints of the imagery for the 1934 National Parks commemorative series, prepared by H.L. Lindquist for Stamps magazine.

Each print showed the central vignette, without frame or inscriptions, in the color of the issued stamp. The set went for $649.

Among modern rarities was an example of the controversial upright Jenny Invert souvenir sheet, prepared by the U.S. Postal Service in 2013 as a gimmick to woo collectors.

The USPS had decided that year to reissu e the iconic 24¢ Inverted Jenny airmail error of 1918 (Scott C3a) as a pane of six $2 stamps. One hundred of the panes were deliberately printed with the Curtis JN-4 biplane right side up, and these instant rarities were allegedly shuffled in at random with the 2.2 million normal panes showing the aircraft upside-down.

Each of the sheets was individually wrapped, with the intention that a postal customer discovering one of the upright examples would re-experience the surprise and elation felt by William T. Robey on that morning almost a century ago when he came across the original error at a Washington, D.C. post office counter.

Initially, the editors of the Scott catalog resisted listing the upright Jenny Invert pane, on the grounds that it was an intentional variety made solely for collectors, rather than one that arose in the course of production for postal needs.

Eventually, however, the $2 upright Jenny Invert stamp was given a Scott number, 4806d. To date, some 32 examples have surfaced, with a few more probably lurking in shy collectors’ hands.

Several have been sold at auction. The latest one, in the Siegel sale, brought $47,200.