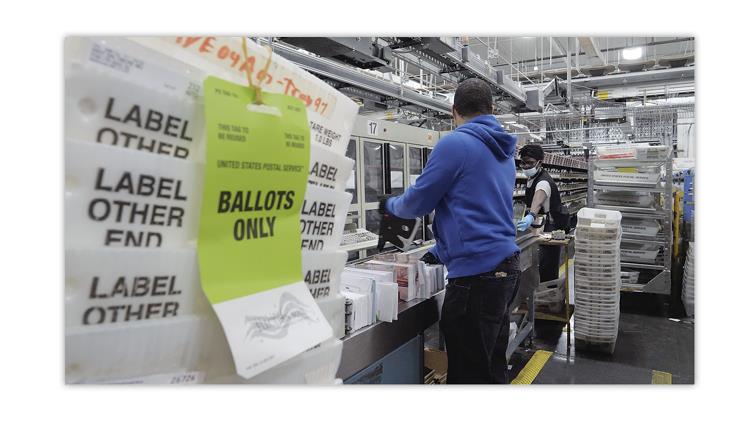 Trays of 2020 election ballots in queue to be processed on a delivery bar code sorter (mail-sorting machine). Photo courtesy of the United States Postal Service. 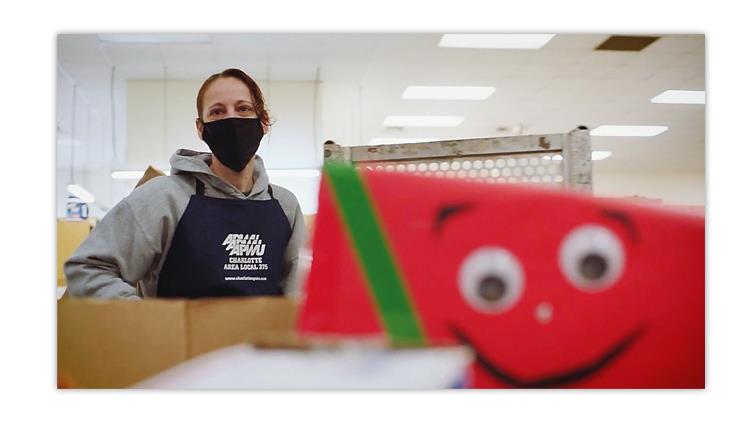 Video screen capture of a holiday advertisement by the American Postal Workers Union. Image courtesy of the APWU.
Previous
Next

With the imminent departure of Washington’s biggest critic of mail-in ballots, the United States Postal Service has congratulated itself for its handling of millions of ballots in the Nov. 3 elections.

In a report released Dec. 29, the federal agency boasted that it delivered 99.89 percent of mail-in ballots to election officials within a week.

“The overwhelming majority of ballots were delivered in far less time than that,” the Postal Service said in a news release.

“Throughout the 2020 election, the Postal Service faced unprecedented challenges, but the commitment of our 644,000 men and women to deliver the nation’s ballots securely and in a timely manner never wavered even in the face of the pandemic,” Postmaster General Louis DeJoy said in the news release.

“We take great pride in the Postal Service’s performance which is thanks to our hard-working men and women who went to extraordinary lengths to fulfill our public service mission, meet the public’s high expectations and uphold the Postal Service’s promised to deliver the nation’s election mail securely and in a timely manner,” said DeJoy who had promised Congress the agency would do just that.

The report, titled “2020 Post-election Analysis: Delivering the Nation’s Election Mail in an Extraordinary Year,” said that it took an average of 1.6 days to deliver ballots from voters to election officials. The report added that this was faster than the average delivery time for a first-class letter in October 2020 (two and one-half days).

Overall the agency said it delivered and processed at least 135 million ballots during the Nov. 3 general election.

It said it also carried 4.6 billion pieces of election mail, an increase of 114 percent over the 2016 election cycle.

The report came as President Donald Trump was ending his presidency.

Trump has been outspoken in his criticisms of mail-in ballots, claiming that they were subject to widespread fraud and abuse.

He has repeated those claims even though his own Department of Homeland Security has described the election he lost to Joseph Biden as one of the most secure the nation has held.

The election mail report came as the Postal Service was struggling with a glut of Christmas packages that overwhelmed the agency.

The Postal Service blamed the problem, which also slowed first-class mail deliveries, on Federal Express and United Parcel Service turning away some of their customers. The USPS also said the COVID-19 pandemic left many postal facilities understaffed.

The American Postal Workers Union applauded its members in holiday ads that appeared on a number of television channels.

“We are very appreciative of the public support our members have received throughout this very difficult year,” APWU president Mark Dimondstein said in a news release.

“As this pandemic stretches on and we get beyond the challenges of timely processing and delivery of tens of millions of ballots, it’s easy to forget about postal workers and to think that they will always be there, every day, steadily delivering billions of items of mail, medicine, ballots and packages,” he said.

“But, the fact is, we can only continue our mission with the public’s support.”

The union said it regarded the COVID-19 relief bill that gives $10 billion to the Postal Service as “the down payment” and predicted Congress will be asked in 2021 to give more financial aid to the agency.

“The incoming Biden administration also has discussed the expansion of postal services, including postal banking and the possibility of using local post offices in a national network of electric car charging facilities, among other new services,” the APWU said.

The release said that more than 23,000 postal employees have tested positive for the coronavirus.